For this Japanese news Flashes, we introduce our readers to the CinemAsia Film Festival and provide a report of the Q&A with Takashi Miike and Masataka Kubota we attended.

CinemAsia is a truly remarkable film festival. Not because it offers a diverse selection of Asian movies, but because the vision, mission and ambition CinemAsia has. By 2030, they want to become the most prominent European institute for Asian Media and culture by developing and sharing their expertise about Asian identity and by building communities with and for artists and their international audience.

The film festival is, in this respect, only the first step, but it is an important step, because haring a wide selection of Asian cinema with audiences is one of the most effective ways to empower the Asian visibility in contemporary European society. Touched by their project and ambition, we reached out to them to offer our modest help of providing coverage.

Our readers can expect reviews of Tezuka’s Barbara (2019) and Amano Chihiro’s Mrs. Noisy (2020) in the coming weeks.

Last night, as a way of celebrating the upcoming Japanese release of First Love (2019) – 28/02/2020, I was invited to attend the screening of Miike’s First Love (2019) and a Q&A session with the master himself and main actor Masataka Kubota. Takashi Miike, despite what his many hard-boiled movies imply, a man with a soft character and a fine sense for humour, entertained us with precise answers. Masataka Kubota, who does not appear to be all that different from the characters he portrays on the silver screen, fulfilled his role as side-kick perfectly.

In this short report, we give an overview of those answers that grabbed our attention in the Q&A.

Miike and Masataka on being international production.

Miike underlined that working together with Jeremy Thomas – the fourth time actually, after 13 Assassins (2010), Harakiri: Death of a samurai (2011) and Blade of The Immortal (2017) – did in fact not change anything for production. Jeremy Thomas is one of those rare producers that understands the ways Japanese film industry works and does, due to this knowledge, not intervene in the process.

Masataka reminisced about the fact this British-Japan co-production enabled him to attend many international film festivals, like Cannes for instance. [Note by P-C: As the Japanese film industry is, first and foremost, focused on the home-market, international co-productions are important to also focus on the international market].

Masatake on preparing for principal shooting.

Masataka began preparation one month for principal shooting. He would go to the gym every day for two hours and practice boxing and rope-skipping. Furthermore, he started to eat a lot of meat to help him to get in shape.

Miike on deciding the female lead.

Takashi Miike made clear that or him the first impression an actor/actress makes is more important than having technique and so on. It is the presence the person emanates, a presence sensible from the very moment one enters the auditioning room, that is, for Miike, the deciding factor. In the case of Sakurako Konishi, Miike knew from the moment she enters that she was meant to play the role of Monika. Even before the movie was written, Miike underlines, she was born for this role.

Miike had, in fact, the same feeling when Masataka Kubota came to audition for one of Miike’s project.

Masataka on working with the female newcomer.

For Masataka, working with Sakurako Konishi was a sort of confrontation with how he,  in the past 10 years has evolved. Sakurako Konishi is pure, while he, after so long in the business, has accumulated all sorts of (acting) techniques to deal with a wide variety of situations.

Masataka also expressed a double hope. For himself, he humbly hopes to still be in the movie business after ten more years, and, for Sakurako Konishi, he hopes that these ten years will allow her to blossom into a big star herself. 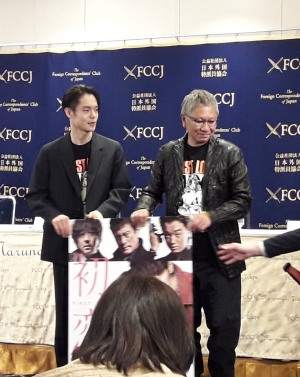 Masataka on using fists instead of a wide range of weapons.

Masataka confessed that he was somewhat envious of his fellow actors/actresses who were could be violent with a wide range of weapons, e.g. katana’s. He also added that due to being limited to his fists (and, for some sequences a gun) for his role, he had the most demanding preparation.

Miike on streaming and going to the cinema.

While Miike said he regularly uses streaming services himself, he also implied that these services or the services in the future cannot replace the atmosphere of going to the cinema. In the cinema, watching movies is not a solitary act, but a social act. You laugh together, you cry together, you enjoy together. Cinema is a social event that cannot be replicated with streaming. Miike hopes that cinema, to be understood as a social place, remains the most important place for enjoying movies

Miike on the anime sequence

Miike explained that Japanese film industry has evolved in such a way that there are no young stuntmen anymore. Most stuntmen in Japan are around 60 years old and the car-scene would have been dangerous for them, especially their backs. Frankly, people – not only the stuntmen – in the Japanese film-industry are not willing to take risks. A second problem the production faced, a problem only quickly mentioned by Miike, concerned the budgetary constraints.

Due to these two unsolvable problems, the easiest solution would have been to delete this sequence from the script, but Miike was against any kind of change at the narrative level. Eventually, after lots of discussion, a quintessential Japanese solution was found: an anime sequence.