My Hero Academia is nothing but a global phenomenon. Capitalizing on the global interest in super heroes narratives, Kōhei Horikoshi has put his own spin on the genre and crafted an exciting mix of utter craziness and shonen narrative tropes. It is, in other words, the One Piece of superhero narratives.

As the first film of My Hero Academy was a huge hit among American and Canadian audiences, it is not surprising that the latest movie, a standalone film animated by Bones providing a new dose of superhero action and adventure, will also be released in America and Canada.

The world has become a superhuman society, with about eighty percent of the population having some kind of Quirk (special trait). Izuku Midoriya or Deku (Daiki Yamashita), who was first born Quirkless, but given, by a chance encounter with All Might (Kenta Miyake), the Quirk ‘One For All’, is now enrolled at the prestigious U.A. High School in order to become a true hero.

As part of their education, all student-heroes of 1-A class embark on a special practical hero work recommendation project. On Nabu Island, an outlying island in southern Japan, they are given the chance to work as real heroes without any teacher or pro-hero supervision.

Not long after the arrival of 1-A class, a quartet of super villains – Chimera (Shunsuke Takeuchi), Mummy (Kousuke Toriumi), Slice (Mio Imada) and Nine (Yoshio Inoue) – arrive at the island. Their leader Nine, who is able to steal quirks, is searching for a specific quirk that will make him able to realize his plan to reshape the world in the world he desires. Our heroes, finding themselves outclassed by these villains, have no other option than to protect Nine’s targets and the other citizens of the island. 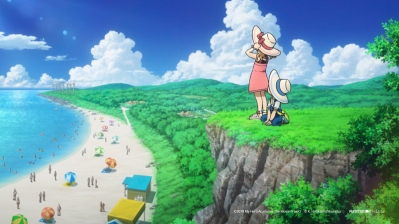 At first, the aspiring heroes of 1-A are occupied with everyday heroics, like helping the elderly, working as lifeguards, finding lost children, fixing machines and mopeds, … etc.. While these acts are of minor importance, these acts, especially due to the heroic music that accompanies them, touch upon the fact that by helping others anyone, especially children, can be a hero. It is subtle addition – with no real importance to the main plot, but an addition that, due to the popularity of My Hero Academia, will not fail to inspire children to become everyday heroes in their own way.

With the arrival of the villains, our heroes are forced to become more than just everyday heroes. As everyone on the island is put in danger by the destruction the villains cause, they know that they need to become a true hero, that they need to bear the responsibility of a hero. It is not only about words, about saying that one wants to protect others, but about the fact that a hero, whenever he is called upon due to the appearance of a villain, needs to take action in order to fulfill the responsibility he is given. This narrative is thus not only about realizing one’s ideal of protecting others, but also about fulfilling the given responsibility of protecting others. 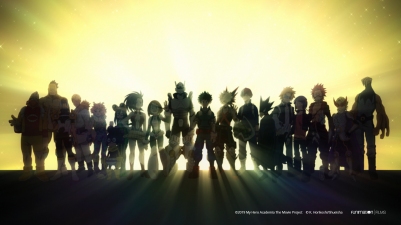 It is, furthermore, also clear, due to this being a shonen narrative, that the only way our heroes have a chance of being victorious is by working together, by utilizing the bonds they share to the fullest, and by combining each other’s quirk to maximize their attacking power. Another aspect that cannot be absent from a shonen narrative is the desire to become the greatest. Both Deku and Katsuki Bakugō (Nobuhiko Okamoto), his cocky child-hood friend, have this desire. The way the (phallic) desire is approached in My Hero Academia presents a somewhat different take on the familiar shonen dynamic of becoming stronger. It is not, like in most shonen narratives, a sudden villain that urges the main-hero to become stronger, but a friend that shares the same passionate desire of becoming the greatest (Narra-note 1 (spoiler)).

Even though My Hero Academia: Heroes Rising gives enough context to enable spectators new to Kōhei Horikoshi’s universe to understand the main plot, only those who have read the manga or seen the anime series have the necessary baggage to be able to fully enjoy this narrative more. There is simply too much info (on characters and relationship between them) that cannot and should not be touched upon in the narrative. 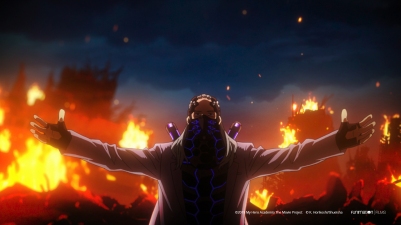 But people who only have followed the anime series might also feel somewhat at loss, as the events seem to take place much later than the events of the current anime season – Nine, the main-villain, only appears three arcs later in the manga. This time-gap, of course, means that various characters have new gear and new techniques and that the spectator, in fact, does not know what to expect. While this might be problematic for some, this time-gap also engenders interest in how the new gear and the new techniques will be acquired – an interest subtly urging spectators to buy and read the manga.

Once the villains appear, the narrative quickly turns into a concatenation of exciting fighting show-downs. And this is, arguably, the most important part of the entire narrative. Not only does the narrative pleases the spectator by showing a diverse range of superpower moves, but My Hero Academia: Heroes Rising also satisfies the spectator by framing these superpowers and the fights they are used in in an exciting and visually pleasing way. This is especially true for the extraordinary and visually ravishing finale, a climactic tensive finale that delivers everything a fan of Shonen manga in general and My Hero Academia in particular has come to expect from the genre. 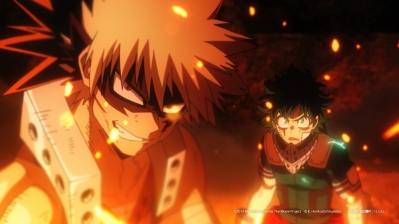 Action sequences are, as a matter of fact, always staged with an abundance of energetic movement. These dynamic compositions, interspersed with only a few static moments, do not only empower the action, but are also instrumental in generating tension as such. The fact that the action in My Hero Academia: Heroes Rising is able to attain such dramatic heights and succeeds in generating tension in the spectator is, in our view, function of the reliance on cinematographical movement as well as on the abundance of visual ques empowering the myriad of on-screen action-moves. The heroic musical accompaniment, for that matter, further consolidates the tension and the drama during the action as well as – which is of equal importance – during the moments of rest between heroic confrontations (Cine-note 1).

My Hero Academia: Heroes Rising provides everything fans have come to expect from the franchise. It is a quirky adventure driven by over-the-top action, crazy super moves, and tensive show-downs, that does not fail to touch upon the tropes of the Shonen genre, like the importance of working together as friends in order to overcome seemingly unsurmountable obstacles and foes. While it is not the best introduction to newcomers to the franchise, My Hero Academia: Heroes Rising will not disappoint them and might even urge them to check out the anime and the manga’s.

Narra-note 1: Without spoiling too much, Deku will eventually be forced to make a choice between his desire to become the greatest hero and his desire to protect everyone as a hero. While these two desires are not conflictual or mutually exclusive per se, Deku’s is brought to a point that the realization of one desire means forsaking the other.

Cine-note 1: Some action-sequences also show that a marriage between 3D-moments and 2D-moments can be fertile. It is due to finding a good balance between both and applying a thoughtful lightning design that a pleasing feeling of continuity between 3d visuals and 2D animation can be attained.