Having won the price for best director in the Japanese Cinema Splash section of 31th Tokyo International Film Festival and White Mulberry Award for First time director at the 21st Far East Film Festival among others, Seiji Tanaka is logically propelled as a promising Japanese directorial talent. Time for us to check his first feature narrative out.

While Kazuhiko (Yoji Minagawa) graduated from the world-famous Todai university, he has, besides doing some part-time work, not been able to get a real job. His mother surprisingly does her best to aid and support her son in finding a job. But her son remains reluctant to accept the offers that crosses his path.

One night, after his mother forces him to visit Matsuno-yu, a local bathhouse, in order to refresh himself, he accidently meets his former high-school class-mate Yuri (Mebuki Yoshida). Yuri, who is seemingly still romantically interested in him, urges him to join the high-school reunion party. At that party, Yuri’s continued questions about work forces Kazuhiko to ‘confess’ that he’s taking a break from work. She advises him – not only for his sake, but also for her pleasure – to apply for the open position at the local bathhouse. Due to Yuri’s influence, Kazuhiko takes the step and applies for the job.

Melancholic immediately introduces us, through its main character, to the contemporary reality of adults that remain reluctant to take up a true position within society, a position that, by taking place within the societal field, is marked by responsibilities. Kazuhiko’s reluctance is, as is evoked by his defensive body language, primarily function of the discomfort he feels in the social field. This is not only evident in the awkward way he converses with Yuri but also in his (conscious?) failure to start conversations at the reunion party. This social reluctance is furthermore evident in the way he acts at his job and the evasive way in which he converses with his newly hired co-worker Matsumoto (Yoshitomo Isozaki). Nevertheless, the element of bonding is to be situated in the way Kazuhiko’s relation with Matsumoto evolves – this element of evolution, of course, implies that Kazuhiko’s initial social awkwardness will become milder in relation to his co-worker.

One aspect that might explain some of Kazuhiko’s reluctance is the fact, as is beautifully underlined by the narrative, that the social field is marked by multitude of expectations and that these expectations, by being carried by the others within society, can attain an inhibiting weight (Narra-note 1). Kazuhiko’s inhibition, in our view, can partially be explained by the expectations that surround graduates of Todai university. As these expectations are a societal given, supported by Yuri as well as Kazuhiko, it should thus not come as a surprise that, in his conversations with Yuri, Kazuhiko is rather evasive when it comes to talking about his (lack of) work-experience. 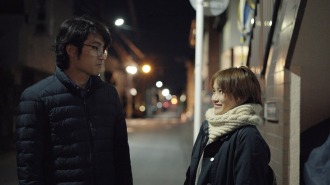 One should not fail to notice that Yuri initially remains blind to Kazuhiko’s evasive attitude, a blindness revealing the fact that she fails to hear Kazuhiko’s subjective position. Nevertheless, Yuri’s words have a certain activating effect on Kazuhiko, as his decision to come to the reunion as well as his decision to take on the job at the local bath are only function of her sweet words. If this effect is born from Kazuhiko’s romantic interest in her, one can state that Melancholic underlines the fact that love can make a person overcome his inhibition. The focus on what will become a romantic relation between Yuri and Matsuhiko constitutes Melancholic’s heartfelt romantic narrative thread (Narra-note 2).

One night after sneaking into the bathhouse from the back, Kazuhiko learns that Mr. Azuma (Makoto Hada), owner of the bathhouse, in order to repay his debt lends his bathhouse to Tanaka (Masanobu Yata), a local yakuza, for executions and body disposal. As Kazuhiko is discovered, he is forced by Azuma to become a night-time cleaner and work together with Kodera (Yasuyuki Hamaya), the executioner, and to his surprise with Matsumoto.

The inhibiting weight of society is also touched upon by revealing the subjective impact money can have. The amount of money Kazuhiko receives for this dangerous clean-up work alters temporarily his self-confidence and the way he interacts with others, most notably with Yuri (Narra-note 3). In this way, the narrative shows how money can influence one’s ego, (i.e. the image one, by definition, projects to the others in the societal field), and can even lead to a performative act (e.g. Kazuhiko asking Yuri out). Moreover, Melancholic uncovers the very fact that money enables one to modify one’s (body-)image, a modulation influencing the image others have of the person in question (Psycho-note 1, Narra-note 4).

The action is brought into the narrative through the overarching yakuza narrative, the narrative that enables the unfolding of Kazuhiko’s personal coming-of-age narrative. While action enters the frame by way of Kodera and Matsumoto, via an exploration of what happens up until the target arrives at the bathhouse (i.e. localizing the target, capturing the target, and in necessary, murder anyone who stands in the way), Kazuhiko (and his societal position) will eventually, as the narrative nears its conclusion, sucked into the violence of the underworld. The choice Kazuhiko makes, his choice to enter the field of violence, is the second performative speech-act that Kazuhiko performs – an act clearly uncovering his desire (Narra-note 5 (spoiler)). What’s great about these short moments of action in Melancholic is that these moments of action are ever grounded in reality and as such feel natural. It also gives Seji Tanaka the opportunity to spice his narrative with some tension (Special-note 1).

What’s remarkable about Melancholic’s cinematography is the very naturalness inherent to the framing, a naturalness primarily born from the presence of a subtle tremble in the framing. One can sense this naturalism primarily in the fact that, due to this subtle tremble, every transition from semi-fixity to following or spatial movement has becomes smooth (Cine-note 1). But the impact of the subtle tremble on the experience of the narrative does not stop here. While this tremble, due to its voyeuristic character, subtly grounds the narrative in reality, this tremble successfully serves another aspect as well: the aspect of tension.

While this tension is supported by the tremble that marks the framing – as said above, the prime source of tension is nevertheless primality born from the threatening musical pieces that supplements the speech-interactions and/or the spatial sounds present in the narrative spaces. In other words, the musical accompaniment succeeds in giving the cinematographical tremble a tensive quality while making the tension already lurking in certain acts or certain speech-interactions truly sensible. Nevertheless, there is one point in the narrative, near the end, where the tensive music is not able to generate the tension Tanaka was hoping to evoke (Cine-note 2). The musical pieces are also useful in supporting the other facets of Melancholic, like for instance its romantic facet and its subtle lighthearted aspect.

The fact that this genre-bending narrative is able to become so enjoyable can largely be attributed to the pitch-perfect performances of the cast. What could have become a disjointed mess does not only finds its fluid integration by the narrative’s structure as such, but also by how the various performances makes the tonal changes of the narrative smooth. Mebuki Yoshida, for instance, brings the playful nature of Yuri to life with her charming and natural presence. Yoji Minagawa is convincing as the socially inept Kazuhiko and Yoshitomo Isozaki is truly successful in bringing the charming side of his character as well as the hidden side believable to the fore.

Melancholic is an amazing debut by Seiji Tanaka. By mixing crime, romance, friendship, and a pinch of violence into a coming-of-age narrative, Tanaka has succeeded in crafting a truly entertaining statement against oppressive control and the importance of finding, on one’s own subjective account, moments of relational happiness. One can only do right by this new talent, by watching his touching and, in essence, humanistic narrative.

Narra-note 1: Another aspect that might empower this inhibiting mechanism is seeing the success of others. Rather than being motivating, this aspect is able to make the inhibiting weight of expectations even heavier. This aspect is touched upon by the character of Tamura, Kazuhiko’s class-mate who due to his financial success has become attractive for a lot of his former female classmates.

Narra-note 2: Let us note the teasing nature of Yuri’s interactions with Kazuhiko and the fact that Yuri becomes more perceptive to Kazuhiko’s emotional state as their relationship develops.

Narra-note 3: This is most sensible in Kazuhiko’s bold act of asking Yuri to be his girlfriend.

Special-note 1: At certain points in the narrative, one can discerns the fact that the weapons are fake. Nevertheless, this does not disturb the enjoyment one can extract from the narrative.

Psycho-note  1: When Kazuhiko takes Yuri out for dinner at an expensive restaurant, the very context he is able to put himself in by way of receiving the bonus influences his self-image as well as the image others have of him. One can feel here the aspect that the ego is a contextual given.

Narra-note 4: One should also not fail to see that Kazuhiko’s conflict concerns the difficulty to give the hidden societal reality of yakuza and executions a place in his mental world. Furthermore, he is forced to hide this reality and the place this reality has in his life to Yuri.

In other words, he has to use his ego, the way he is in relation to others, to hide the reality he struggles with.

Narra-note 5: While one could read in Kazuhiko and Matsumoto’s plan a refusal of being controlled by the older generation, such reading does not account for Mr. Azuma’s subjective desire, a life without being controlled by Tanaka, and Kazuhiko’s desire of leading a normal life, a life where the reality of executions remains hidden in the night.

If one takes all the desires, including Matsumoto’s desire, into account then the narrative becomes a narrative against oppressive control as such. And even though Kazuhiko’s relation with Yuri is ultimately painfully thwarted, the narrative does not fail to communicate the importance of small moments of happiness.

Cine-note 1: The scene we’re talking about is the scene were Kazuhiko tries to start the car.