Live-action adaptations of manga are a booming business in Japan. While this trend is not applauded by everyone – a proliferation structuring the business, one cannot deny that the potential these narratives have often led to enjoyable end products – e.g. Moteki (2011), Rurouni Kenshin: Kyoto Inferno (2014), and Tokyo Ghoul (2017). Is Kan Eguchi, an unknown director with a limited oeuvre but with excellent credentials, able to adapt Katsuhisa Minami’s seinen manga The Fable in something worthy of our time? Let’s find out in our review.

One day, Fable (Junichi Okada), a famous contract-killer, is ordered to stay low for a year in Osaka. While receives Akira Sato as his alter-ego, his partner (Fumino Kimura) is given the identity of Yoko Sato, Akira’s younger sister.

Not that much later, contract killer Fudo (Sota Fukushi) and his partner find a trace that might lead them to the urban myth called The Fable. Full of excitement, he devices a plan to find the Fable, kill him, and replace him as the new urban myth.

While the Maguro office – a yakuza office, led by Ebihara (Ken Yasuda) and the Hamada (Ken Mitsuishi) in Osaka has no other choice than accept Akira Sato and his partner, this obligation comes at a bad time, as the imminent release of Kojima (Yuya Yagira) raises the tensions in the underworld of Osaka.

The narrative of The Fable concerns how Fable, the fabled contract killer, is forced to hide behind the image of being a plain citizen within society – a plain citizen with a plain job. But, as quickly becomes clear, the fact that the yakuza organize his ‘disappearance’ will eventually become the obstacle for his mission to lay low and his prohibition to kill. It is thus only due to this link with the Yakuza – a link threatening to suck him into the world of violent conflict he was ordered to avoid – that it becomes increasingly difficult to avoid returning to his shadowy life. While the impossibility of avoiding his truth is caused by Ebihara knowing his legendary reputation, the difficulty to uphold his mundane image for the other in society is, as is pleasingly revealed in the narrative, exacerbated by the fact that his assassination skills have become a sort of a reflex.

The central event of the narrative – the event that introduces the condition for The Fable to break his promise of not using his skills as an assassin, is not so much Kojima’s release and the tensive conflicts his path of masturbatory infliction of violence and provocation ignites, but the act of him threatening Misaki (Mizuki Yamamoto; The Kirishima Thing (2012)), the girl The Fable has taken a liking to, into prostitution. What makes this narrative turning point so powerful is the strong aversion Kojima’s vile extortion and threats is able to arouse in the spectator and the tension these acts infuse into the narrative – a tension absorbing the spectator even more strongly into the narrative than already was the case.

While the central flashback to Fable’s childhood in the structure of the narrative highlights, with a touch of emotionality, Fable’s special relation with his boss (Koichi Sato) and his training, this flashback is also successful in providing, albeit in a subtle way, an explanation for Fable’s many lighthearted quirks – those quirks at the level of eating that do not fail to reveal Fable’s problems to integrate himself. The likeability of Fable as a character, for that matter, is not so much function of the emotionality evoked via this flashback but function of those little quirks – his love for comedian Jackal Tomioka (Daisuke Miyagawa) included – that become apparent in the process of integrating himself into the mundane and every-day fabric of society.

Those that feel that the style of The Fable lacks consistency fail in our opinion to discerning how, by crafting a well-structured and well-paced narrative, Kan Eguchi succeeds in crafting an extremely pleasing and balanced cocktail of blunt bloody violence, nail-biting tension, cool action, and pleasing lightheartedness born from interactions. The pleasing structure of the narrative is also revealed by the fact that Yusuke Watanabe managed to erase the manga-like chapter structure and create a natural unfolding narrative.

As The Fable is also an action-narrative, it should not surprise us that the cinematographical composition is full of movement. One can easily discern three tendencies in the application of fluid movement, be it following or spatial. The first tendency is the tendency to introduce the setting – the narrative spaces – and characters or narrative elements that are essential to the unfolding of the narrative. After framing a narrative space in such introductory way, the subsequent framing of (speech-)interaction between characters is often framed with fixity or semi-fixity. The second tendency, as is expected, is the very tendency of supporting action scenes with cinematographical movement. And, finally, the third tendency concerns the use of following movement to highlight the movements of characters – mainly Akira Sato’s movement.

The dimension of light-heartedness in The Fable is directly sensible by its visual aspects. This aspects do not only refer to the comedic effect of over-acting or the fluid integration of cinematographical techniques (slow-motion, pov-shots) to enhance the framing flow, but to the special visualization of Fable’s action-moments as such, i.e. overlaying most of his moments of violent action with textual information. 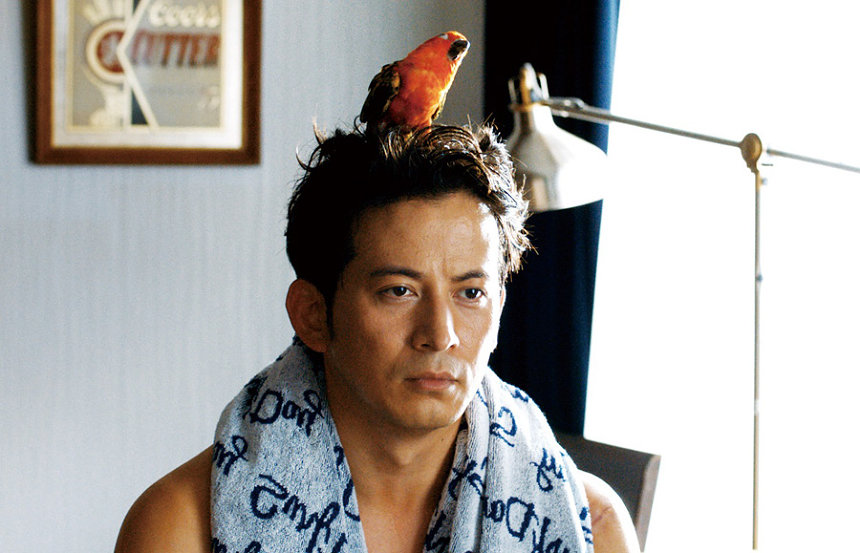 Besides these visual ornaments, there are also some sound ornaments present in the cinematographical composition of The Fable. While the sounds supporting often unconventional shot transitions are such kind of ornaments, these sounds only play a minor role in giving the narrative its lightheartedness. The sound-ornaments that are important and effective in infusing a subtle lightheartedness in the atmosphere are the subtle musical manipulations that support/guide the flow of speech-interactions. Do note that within the cinematographical whole, these sound-ornaments are only sparsely used, with the latter form of ornaments quickly disappearing from the composition.

Besides creating various moments of lightheartedness, Eguchi also ensures that the spectator can  feel the impact of the violence on display. This is not so much attained by cinematographical composition or by visually framing the impact (e.g. with blood) of violence, but by the way the sound-design (e.g. the dull sounds of gunshots) comes to support the framing of the action as such – a support empowering the sensibility of the impact of violence.

What’s truly great about the cinematographical composition of The Fable is that the narrative succeeds, aided by powerful musical pieces, in framing Fable’s action in an exciting and cool way – a coolness directly speaking to and enticing the fantasy of the spectator. The culmination of this enticing coolness is found in the visually spectacular and downright crazy final action-sequence – exciting personal showdowns, old-school shoot-outs, and impressive action-moves are all mixed into an extremely enjoyable package that does not fail to provide the thrills any action-movie should have. Yet, one musical tonal shift disturbs, due to its ill-fitted nature, the otherwise splendid exciting visual ride that brings the narrative to a satisfying conclusion.

The narrative’s unfolding – and the grasping of the spectator’s interest – is also function of various great performances. Junichi Okada reveals with his amazing performance the composure he has as an actor. It is only due to this composure – this self-control, that the surprising moments of over-acting, as contrasted with Fable’s otherwise cold and composed manner, can become truly funny. While Fumino Kimura is not tested in such way, she nevertheless succeeds in giving her character’s mood-swings in interactions an adorable and pleasing lightheartedness. Yuya Yagira (Destruction Babies (2016), His Lost Name (2018) is, like expected, captivating as Kojima, bringing the very auto-erotic pleasure his blood-splattering causes in a ravishing way to the fore. Last but not least, Mizuki Yamamoto infuses her lady-in-distress with the necessary emotionality for the spectator to root for her saviour.

To immediately answer the question we posed in our introduction, The Fable is one of those live-action adaptations that is worthy of your time. By mixing quirky lightheartedness, cool action, and brute violence, Kan Eguchi succeeds in composing an action-narrative that hits all the necessary beats and provides the thrills for the spectator. The Fable might not be testing the limits of the genre, but it is great in what it does, providing a highly entertaining and exciting visual ride full of action.