When one looks at Japanese horror cinema, one cannot but notice an association between horror and the feminine. Not only the iconic onryō Kayako or Sadako – see our review of Hideo Nakata’s Sadako – are female, but even in older horror movies, like in Kaneto Shindo’s Kuroneko, the horror is found in the female.

And now, with Otsuichi’s Stare, another female – dare I say her name? – Shirai-san is added to the Japanese horror repertoire. Is this latest addition worth seeing or should we throw it in Sadako’s well?

One night, Kazuto (-) calls to ask his brother Haruo (Yu Inaba) to promise him to forgive him if he dies. Not long after that, he is found death – died of cardiac arrest which also, at least to the coroner, caused his eyeballs to rupture.

At the hospital, Haruo accidently meets Mizuki Yamamura (Marie Litoyo). Her friend Kana (Manami Enosawa), who was also a friend of Kazuto, died in very much the same way as Haruo’s brother. As the police sees no reason to investigate this seemingly natural and unrelated deaths, they decide to investigate the mysterious deaths on their own.

Stare uses, not unlike other J-horror narratives, mystery and investigation as to support the unfolding of the narrative. The mystery of the deaths, in fact, is the main element propelling the narrative forward. While this element of mystery is already generated visually, it is only made truly explicit when Haruo starts investigating the strangeness that surrounds his brother’s death, an investigation that also involves Mizuki (Narra-note 1, Narra-note 2).

Otsuichi succeeds, from the very first minute, to infuse a subtle mysterious eeriness into the narrative’s spaces. This success has to be situated in the effective play with the visual. More concretely, it is by through small visual elements (i.e. a subtle human contour in the dark, a passing shadow falling on someone’s face) that the otherwise ordinary narrative space becomes rippled – rippled with an eerie mysteriousness (Narra-note 3).

What Stare does in a fabulous way is manipulating the dimension of seeing. To be clear, it is not that what is being seen that forms the initial support for the eeriness, but that something, outside the frame or vaguely present in the shadows of the space, that reveals the character, within the frame, as being seen. It is thus the fact that we see a person being seen – a seeing that produces anxiety, a gaze that kills – that forms the first condition for the eeriness and the unsettling. While the narrative, as the narrative progresses, reveals more visual elements of this woman – elements that ground her firmly in Japanese folklore, one cannot fail to notice that Shirai-san’s gaze, that aspect that kills, initially remains outside the frame. Placed outside the frame, this aspect is first left to the spectator’s imagination – or, put more correctly, to the failure of the spectator to imagine it. But then Otsuichi dares to reveal the face of Shirai-san as such. Luckily, the revelation of the face does not destroy the creepy tension of the narrative. This very reason for this success has to be found in the fact that her face, shrouded in darkness, remains marked by undefinable points – her eyes as well as, albeit to a lesser degree, her mouth.

Another pleasing aspect of the narrative’s structure is the way it uses flashbacks, flashbacks that are ever in function of a living subject or multiple living subjects. One flashback is, in fact, used as a compositional device, allowing a shift from one character, Toshiyuki Morikawa, to another, Eiko, while supporting the fluid unfolding of the narrative (Cine-note 1).  While these flashbacks give us an insight in the recent past of our friends, Kana, Mizuto and Eiko, these flashbacks also introduce Watanabe (Shota Sometani), who plays a central role in spreading the folkloric story of the woman with the big eyes. This folkloric story introduces the fundamental dimension of the name as well as the dimension of taboo. In other words, one is only cursed when one violates or is forced to violate the taboo that rests on her name.

What stands out the most in the cinematography of Stare is its fixity. When movement does enter the cinematographical mix, it happens most within shots – fixity transforms into a measured following movement or measured spatial movement or a measured cinematographical movement end in fixity (Cine-note 2). The fixity works well in Stare as it is able to sensibly underline the unsettling nature of the gaze that fixates the characters, a fixation ultimately resulting in their untimely death (Narra-note 4 (spoiler)). 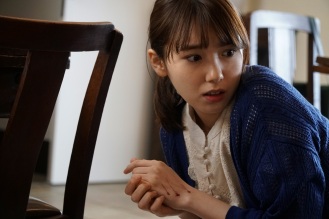 While normal colour-schemes are used in the narrative, those moments of eerie tension playing out in the dark are empowered by a thoughtful and effective play with a compositional relief of darkness. In accordance with the pulsating structure of the narrative, the moments of eerie tension, moments benefiting of relief of darkness, are applied in a measured way. But we should not praise the crafting of unsettling atmosphere by manipulating darkness that much. What really deserves our praise is the fact that the narrative succeeds in frame scenes, scenes taken place at day, with the same unsettling effect.

While the revelation of an unsettling eeriness, an eeriness ever able to become present in the narrative space, is supported by a subtle but effective musical accompaniment, the eeriness benefits most, as already mentioned above, from the preluding sound, i.e. the tingling of a traditional bell marking the rippling entrance of the murderous woman (Music-note 1). Another sound that is disconcerting is the sound that accompanies the rather indirect framing of gore. 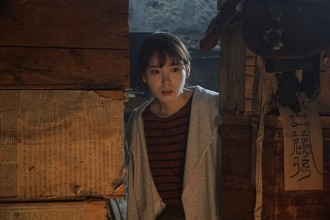 One aspect that could have been better, concerns the acting. At certain times, the acting is uneven and even slightly awkward. The best and most consistent performance of the narrative is nevertheless given by seasoned actor Shota Sometani (Samurai Marathon (2019), And Your Bird Can Sing (2018), Satoshi: A Move for Tomorrow (2016), The Snow White Murder Case (2014)). While this unevenness in acting is not without impact on the spectator, it does not problematize the implication of the spectator in the unsettling and tensive atmosphere.

Narra-note 1: The narrative thread of investigation is also doubled by Mamiya (Shugo Oshinari), a journalist, who has taken an interest in the case.

Narra-note 2: Because of the great narrative structure, we are driven, just like Mizuki and Haruo, to know more, to know the truth of the deaths, even if we feel that it is an unsettling truth horror we do not want to see. It is first this form of tension that provides enjoyment for the spectator.

Narra-note 3: There is one other rippling element present in the narrative – an element not related to any sound whatsoever. This element, an element only present in Mizuki’s narrative trajectory, concerns the horrifying apparition of Kana’s dead body. While Kazuo also meets his death brother is does not really constitute a rippling effect.

Narra-note 4: How can we understand the way to defeat her? One cannot become the object of her gaze. One has to reverse, in a certain way, the objectifying gaze. In a very evocative reading, one could even say that one has to confront the lack in symbolic, that one cannot avert one’s eyes from the real, a real concerning the feminine, that will always escape the symbolic.

A slightly different reading, the one that the narrative implies by letting Kazuo compare her with a social media app, concerns the fact that Shirai-san desires love/approval. One has to actively see her, see her for what she is, a being defined by a real lack, in order to repel her. But, as is revealed, her thirst for approval is never satisfied. Additionally, she does not hesitate to play out deceased loved one’s in order to bring the curse to its conclusion.

Cine-note 1: What we mean is that the both characters support the same unfolding of narrative. In this case, this piece of narrative concerns the story of the big-eyed woman.

Cine-note 2: There is also one instance in the narrative where shaky cam shots are used.

Music-note 1: The only true jump-scare in the narrative is also empowered by the sudden burst of music.