After working as an assistant director for various years, Eiichi Imamura finally take the plunge as filmmaker with his feature-length debut, Beautiful Goodbye. That his debut is already successful is evident from the fact that it won the Special Jury Award at the 2019 PIA Film Festival and received its international premiere at this year’s Nippon Connection.

Daisuke Kogure (Yusuke Takebayashi) is on the run after having stabbed a man. At night, in the middle of nowhere, he accidentally hits a wandering young woman, Natsu (Bi Yo), with his car. While he laments the fact of having committed another murder, the woman simply stands up and enters his car. Faced with Natsu in his car, he fails to utter a single word, but led by the words by the young lady he drives off with her. The next morning, Daisuke and Natsu come to realize she may have become a zombie.

Natsu’s violent boyfriend Shinoda (Koki Nakajima), who was left by her at the site of her re-birth, is overjoyed when he realizes she has come back to life and starts searching for her. Yet, he is as responsible for her initial death as he is for her forced re-birth. 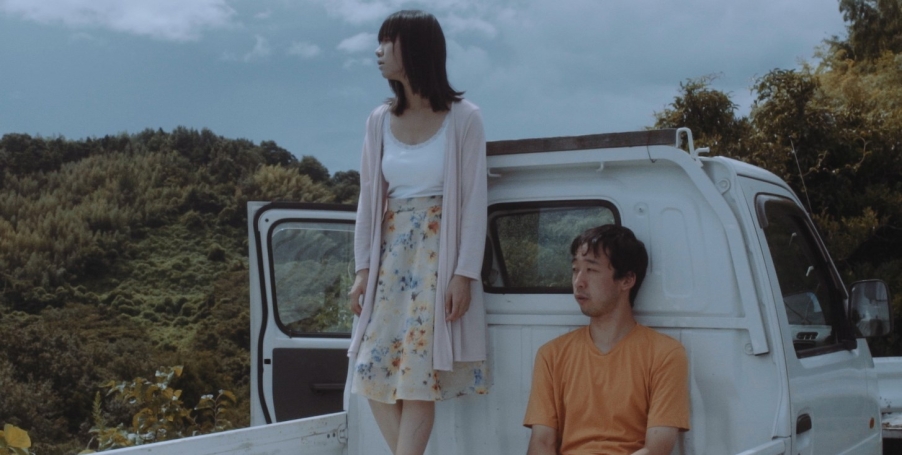 Beautiful Goodbye is a rather unconventional zombie-narrative due to two reasons. Firstly, the narrative provides a departure from the conventional concept of a zombie. Imamura does not confront the spectator with flesh-thirsty will-less monsters, but introduces the spectator to a young lady who, despite several bodily and mental changes, remains fully conscious of herself as subject for the most part. She is, in other words, a humanized zombie or a zombified human. Secondly, this narrative does not concern a zombie outbreak at all. Imamura’s Beautiful Goodbye focuses on exploring how the relation between Daisuke, who committed a violent crime, and Natsu, who was brought back to life after being abused, evolves.

Daisuke Kogure, while never truly made explicit, is somewhat of a social outcast. His stuttering may have forced him to the sidelines of society and problematized his integration in the social field, he has realized a minimal presence, a place where he can feel at ease, in the social field by being a blogger.

The act of stabbing, of course, destroys his possibility to maintain himself within the position of blogger and puts him, promptly, outside the societal field. His decision to run, as the spectator rightly feels, is but a vain attempt to remain outside society and outrun the law of said societal field. When Daisuke meets Natsu, a woman who should never have been alive, he meets her as outsider, as someone who has put himself outside society.

Natsu, for that matter meets Daisuke as an outsider as well. She is an outsider because she is structurally unable, beyond her obvious unwillingness, to return to her former social position. Her re-birth as well as her sustained subjectivity radically rewrites the symbolic position she is able (and, in this respect, wants) to realize (Narra-note 1 (spoiler)).

What binds Natsu and Daisuke is, as can be expected, this position of being an outsider, but the very motor of their relationship is Natsu’s disarming charm and her immediate acceptance of somewhat socially awkward Daisuke (Narra-note 2). That this relationship changes Daisuke is evident by the change at the level of his speech within this relationship. This change puts the nature of his stuttering into a different light. While one could state that the stuttering caused Daisuke’s social difficulty, i.e. his difficulty to integrate in the social fabric, the singular impact Natsu has on Daisuke reveals that his social difficulty and his stuttering are one and the same thing. Imamura’s narrative thus illustrates, albeit subtle and implicit, that one’s social context, the place where one needs to realize himself as subject, is often, at the same time, a context that problematizes the process of subjectification.

Inamura’s composition also puts – and this important – emphasis on the characters as such. The visual arrangement, by using more temporally long shots to frame the emotions, facial expressions, and interactions of his characters, underlines that Beautiful Goodbye is nothing other than a character-driven narrative. Of course, this means that the success (or the failure) of the narrative depends on the performances of the actors/actresses as such. Luckily, the performances by Yasuke Takebayashi and Bi Yo do not disappoint. Both Yasuke Takebayashi and Bi Yo infuse enough subtlety into their characters as to make their characters believable and the unusual bond they form heartwarming.

Beautiful Goodbye is an original and highly unconventional zombie-narrative. Instead of offering us another blood-dripped horror narrative, Imamura utilizes the concept of the zombie to tell, as ironic it may sound, a touching humane tale about the importance of reciprocal openness and the power of inter-subjective relations.

Narra-note 1: Later in the narrative, it is implied that Natsu’s rebirth is limited in time and that she is slowly returning to her former state as corpse. This plot-element, besides corroborating the impossibility for her to realize a renewed position within the social field, is essential for making Natsu’s trajectory and her bonding with Daisuke such a satisfactory and emotional experience.

Narra-note 2: The bond between Daisuke and Natsu is, in a way, only made possible by the violence in their life. Violence is, in fact, what brought them together.