Takafumi Tsuchiya is, in many ways, already an accomplished director. In his ten years of shooting commercials and music videos and making video art he has already amassed numerous international rewards. That music is central to his first feature film, a film adapting the ‘birth’ of famous Japanese rapper SEEDA, should thus not surprise us.

[Those spectators who liked Daisuke Yamazaki’s hip-hop narrative Yamato (california) (2016) should really check this one out.]

Since childhood, Hakuhiro Yoshida (Show Kasamatsu) had to endure bullying. As a child, when he lived with his family in London, he was victim of racist remarks and, after retuning to Japan, at high school, he is ostracized for being different. He belongs, in fact, nowhere. Luckily, he can mitigate this unbearable position by listening to hip-hop music.

One day, after having gone to the record shop, he finds a group of people free-style rapping in a park. While he only wants to listen to the raps of others, he is forced by a senior at his school with similar interests to rap himself. Not long thereafter, he assumes the stage name, SEEDA. To survive in Tokyo and make it as a rapper, Yoshida starts selling self-cultivated weed.

In its opening minutes, Flowers And Rain sensibly touches upon two relevant problems within contemporary society: racism and bullying. While these scenes are meant to evoke Yoshida’s problematic past and provide an explanation of Yoshida’s later subjective struggle, these scenes are also instructive in revealing the underlying dynamic of racism and bullying as such. What is at stake in racism and in bullying for that matter is the enjoyment of the other as such.

When the British boy, after losing a soccer game, resorts to racist remarks towards Yoshida, it is because he feels castrated from the enjoyment (of winning) and is confronted with the enjoyment he wants in Yoshida. After returning to Japan, Yoshida, seen as a foreign element, is subjected to bullying as well. This bullying has, despite not being function of racial differences, a similar dynamic as mentioned above. When three male students urge him to fit in and not mess up their evaluations, they reproach him, in fact, for enjoying differently and because his way of enjoying threatens them. Their bullying powerfully echoes the Japanese proverb ‘a nail that sticks out gets hammered down’, which means that those who enjoy differently will be reproached until they enjoy like the majority.

These explorations of bullying and racism are important to evoke what Flowers and Rain is truly about. Tsuchiya’s narrative is about subjectivity as such and about the very struggle to realize one’s subject. By following Yoshida‘s trajectory, the narrative not only confronts us with the very difficulties the Japanese society poses, a society urging people to hide their subjectivity behind a fake face of conformity, to find a place where he can realize his subject, but also how, upon finding such a place, how difficult it is to fully realize the subjective position you desire.

In this light, the narrative also touches upon the power of sub-cultures. Sub-cultures are, in fact, places where people who enjoy differently in a similar way can enjoy differently together. That Yoshida is thus able to find a place and a voice as subject within the hip-hop scene is, first and foremost, because within this sub-culture people enjoy in similar way. But there is also a second reason. Yoshida’s entrance in the social structure of this sub-culture allows him to find a minimal symbolic place, under the name SEEDA, within this structure. While Yoshida’s assumption of the signifier SEEDA gives him a minimal symbolic place, a place from where he can desire to make it as a rapper, desire to cement his name and thus his position as rapper within this sub-culture, he still needs to fully assume this place with his subject as such. It is the subjectification of this place, the process of becoming with his subject SEEDA and letting his subjectivity dictate his lyrics, that forms the central struggle for Yoshida.

Nevertheless, by following Yoshida’s path of desire – a path full of personal struggles, setbacks, and familial tragedies – within the hip-hop scene, Tsuchida also provides a deeper exploration of this underground scene and the problematic sides of it. Tsuchida explores the fact that this scene thrives on imaginary rivalry and interpersonal conflicts, an aspect that finds its most exquisite expression in the social ‘institution’ of rap-battles and the intricate link between the hip-hop scene, drugs, and organized crime.

Tsuchiya’s visual composition stands out because of its energetic and stylish dynamism. Each shot is marked, in some way or another, by cinematographical movement. Shaky framing, zoom-out movement, following-movement, or spatial movement, Tsuchiya blends it all fluidly together in a compelling visual whole. 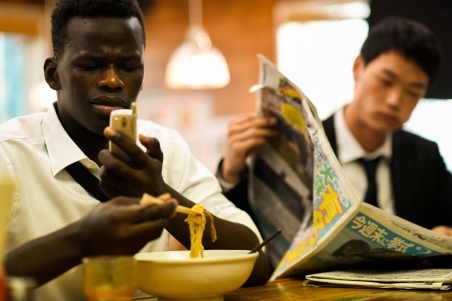 What makes the visual unfolding of the narrative even more visually pleasing is its natural colour-design. Moreover, the colour-design, due to its subtle vivacity, empowers the atmosphere Tsuchiya aims to infuse in the framing of Yoshida’s trajectory. Besides the colour-design, the splendid musical accompaniment – SEEDA’s songs as well as the other musical pieces – and the thoughtful nature of the visual composition as such are also instrumental for crafting the overall atmosphere of the narrative and powerfully evoking the importance of music, here hip-hop, for the process of subjectification. In truth, it is only due to the fluid interplay between these three cinematographical elements that Flowers And Rain is able to become such a moving and touching experience (Acting-note 1).

Flowers and Rain is a wonderful narrative and a moving exploration of the struggle of securing a place for one’s subject, a place from where one can speak as subject. Yoshida’s trajectory, as Tsuchiya beautifully brings to life, is about finding a place for his voice. Not the voice fueled by imaginary ambition and ill-placed pride, the voice of the ego that misrecognize the subject, but a (therapeutic) voice powered by his subject a such. Highly recommended.

Acting-note 1: That Flowers And Rain is able to become such a moving and touching experience is because, to put it more correctly, the interplay between these elements provides an atmospheric frame that successfully empowers the performances