While Extro is Naoki Murahashi’s first feature length film, he has already a long trajectory in filmmaking. Starting in documentary and even music program production he eventually rolled into TV drama production by joining NHK, working on drama’s like Nasty Piece of Work (2016), taiga drama Naotora: The Lady Warlord (2017), and An Invisible Cradle (2018).

After leaving his business to his son, former dental technician Kozo Haginoya (Kozo Haginoya) decides to finally chase his big dream: to become an actor – just like his idol Steve McQueen. He approaches the extra temp agency Lark, an agency working together with NHK-run ‘Warp Station Edo’, and is promptly accepted as an extra/volunteer. Despite being merely an extra, Haginoya’s willfulness and vanity causes a lot of problems. 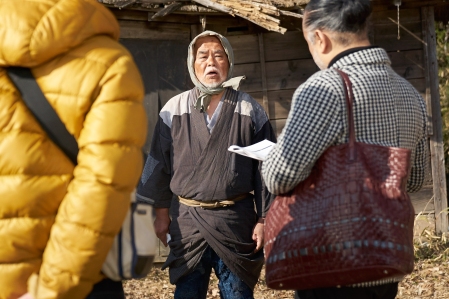 That Extro is a tragicomic mockumentary, a mockumentary exploring the world of extras within the art of filmmaking, is immediately evident from the structure of the narrative as such. The staging of the story, which is mainly focused on Haginoya, consists out of a succession of formal interview-segments (e.g. with Obayashi Nobuhiko, Tatsuya Ishii, Haginoya’s son Kuniaki, … etc.), segments exploring the inner-workings of an extra agency as well as sequences where Haginoya’s life is shown – in the car, but, most often, on the set (Narra-note 1). The two latter segments are, moreover, littered with informal interview-moments.

It is also evident from the cinematography that Murahashi’s Extro is a mockumentary. The subtle shaky framing as well as the use of diversity of camera-movements, both characterizing the visual exploration of the life of extras (Haginoya and others), are instrumental in giving his adventure in the world of filmmaking a sense of realism. This sense of ‘realism’ is successfully evoked because both elements allow the spectator to become aware of the device of the camera and the man wielding it. The static staging of the formal interview segments, which resemble the staging of similar segments in real documentaries, further underline the sense of realism that Murahashi aims for.

It is thus by replicating the style of documentaries, by using an interplay between styles – a dynamic style for informal situations (i.e. on the set)and a static style for formal interview-moments – that Murahashi succeeds in giving his fictional narrative about extras a sense of reality as well as showing that each framed ‘reality’ is necessarily grounded in fiction. Moreover, it is this sense of realism, as beautifully evoked by the cinematographical composition and, not unimportantly, splendidly supported by the natural performances of the actors, that ensures that Extro is a pleasant comedy.

Yet, by emulating the cinematographical style of documentaries, Extro does, up until a certain point, functions as a documentary, as it gives, via the fictional narrative of Haginoya and others, a pleasant and, in many ways, insightful exploration of the inner-workings of the set and the inner-workings of an extra-agency. Via these explorations Murahashi does not only touch upon the art of filmmaking as such, but also on the indispensable function extras have within this realization of this art – a function that remains, as the painful tragic moments of the narrative sensibly illustrate, largely underappreciated.

While it might be ironic, it is only by showing in a comical way how problematic the non-functioning of an extra can be, e.g. how Haginoya’s vanity and self-willed actions disturb the process of filming, that Murahashi succeeds in illustrating Obayashi’s wonderful opening statement: that the role of the extra is to support, by his very presence, the fantasmatic visual context that allows the spectator to give a certain ‘believability’ to the main cast whose role is to animate the story (Trans-note 1). The extra is, in other words, indispensable but only as a part of the visual atmospheric canvas upon which the main actor/actress is asked to paint his incarnation of his character. 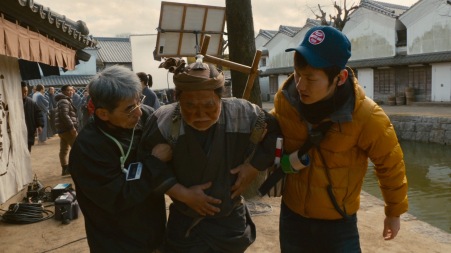 Extro is a very pleasant mockumentary that beautifully illustrates the often-forgotten truth of the art of filmmaking: the indispensability of extras. This indispensability is illustrated by showing, in a comical and even farcical way, how the non-functioning of the extra destroys the whole filmic frame. A loving ode to filmmaking that underscores that without extras, there would be no stars to shine.

Translation-note 1: In translating Obayashi’s statement for the subtitles, the signifiers reality and making it real are applied, but these translations fail to underline the very fantasmatic dimension Obayashi underlines in his statement. Rather than saying that extras make it real, Obayashi formulates that extras give it (acting of the main actor, the whole of the narrative, …) a sense of fidelity, a sense of believability.