To anyone who loves cinema,

Obayashi Nobuhiko was a painter or, maybe even more correctly put, a visual poet. With his wild and extravagant editing style he always succeeded in utilizing the evocative dimension of the image, that aspect that images are, after all and said is done, structured by language – he fully understood that every image as a whole and every visual element within the frame is marked by the dimension of signifiers. 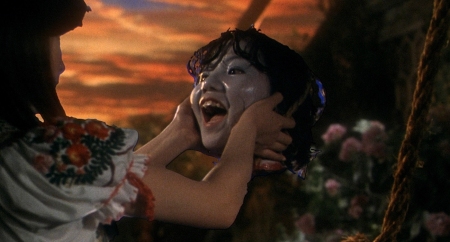 Obayashi, born in Onomichi in Hiroshima prefecture, equated the traumatizing irruption of this irrational real with war in general and with the atom-bomb in particular. His cult-hit House (1977), for instance, is nothing other than a “visual translation of the [traumatic] impact of the atomic bomb”. Not only is the flash in the eyes of Shiro associated with the flash [‘pika’] of the atomic bomb, but all the visualizations of body-violence (e.g. the breaking of Oshare’s face, the many severed limbs, … etc.) need to be read as visualizations of the impact of the real of the atomic bomb.

Why did Obayashi keep on referring to the real of the war and the destructive power of the atom-bomb? He had but one cause: to achieve world peace with the power of the cinematographical narrative. In Hanagatami (2017), where Obayashi’s cinematographical extravagance serves both the framing of the desire to life as well as the looming impact of the real of the war, he asks the spectator the following: “Why invest in war as peace is so much more beautiful and rewarding?”

His last movie Labyrinth of Cinema (2019), which I consider to be his ‘magnum opus’, Obayashi reposes this question but in an even more urgent way. He skillfully uses narrative repetition to confront the spectator, time and time again, with the eternal truth that the phallic conquest for power that leads to violence and war destroys the beauty of love, destroys the beauty of inter-subjective connection, destroys the beauty of the subjects accepting the Otherness of each. Labyrinth of Cinema is Obayashi’s most powerful plea for a future of love without war and atom bombs – after a pika (flash) there should not be a don (boom), after pikapika (sparkle) there should be ai (love).

With the passing of Obayashi Nobuhiko cinema loses one of its masters, loses one of its international treasures. There will never be anyone like Obayashi Nobuhiko. He was radically unique. He was radical. A true activist armed with one of the most powerful weapons in the world: the visual signifier. He will be sorely missed. Of course, he will be missed, but his oeuvre will live on. It is my duty and the duty of everyone touched by his heartfelt pacific message to make sure that his narratives keep on entrancing spectators around the world and that the plea for world peace he kept on repeating keeps on living in the hearts of everyone who loves cinema.