Despite the fact that suicide has been declining in recent years, it still remains a pressing social problem in Japan. But suicide, while it affects society as a whole, is often a ravage for those who are confronted with it. Inspired by the suicide of his own brother, Katsumi Nojiri sets out to offer an exploration of the various ways suicide can impact the subjects left behind.

One day, Koichi (Ryo Kase), a hikikomori, commits suicide by hanging. When his mother Yuko (Hideko Hara) finds him, she immediately runs to the kitchen to take a knife. She returns to her son’s room and attempts to commit suicide as well. While Yuko survives her suicide attempt, her suicide attempt results in a coma. With Koichi dead and the mother in a coma, father Yukio (Ittoku Kishibe) and Fumi (Mai Kiryu), his daughter, attempt to continue their daily life.

And then, one day, Yuko wakes up. Upon hearing she has been in coma for 49 days, she immediately asks if today is the 49th memorial of someone’s death – shijūkunichi. The question flusters the family members surrounded around the bed and Yukio, not wanting to say their son died, says that Fumi’s rhythmic gymnastics coach has died. And then, Yuko asks where Koichi is. Fumi tells her that he found a job in Argentina.

Lying To Mom is a narrative that explores how a traumatic (or at least a stressful) event disturbs familial functioning in general and the individual family members in particular. But before analyzing how Koichi’s suicide puts the family in disarray, we want to underline that the way Yuko’s “forgetting” is staged is unrealistic. As every narrative element underlines that the event for Yuko was highly traumatic, the event would never been inscribed in the subject in a symbolic way. Such traumatic event would have inscribed itself in a non-symbolized way. If Yuko fails to “remember” her son’s suicide, it is not because she forgot, but because it was not registered at the level of remembrance. The notion of retrograde amnesia does, in truth, not make any sense.

The impact of the traumatic event is most evident in the subsequent suicide attempt of the mother and her hospitalization. The hospitalization reveals how central Yuko was to the smooth functioning of the family. Without his wife, Yukio is unable to keep the household running in a decent way. His inability to keep the household running forces Fumi, who already cares for her hospitalized mother, to take care of her troubled father as well. One could state that the sudden inability to rely on Yuko forces Fumi to leave the comfort-zone her caring mother so nicely established for her.

Due to the sudden death of her brother, Fumi decides to go to a grief care support center. The importance of the support center has to be situated in the fact that it creates a minimal social network that supports the working-through of the subjective impact the suicide of a loved-one has. These sequences successfully reveal the different sides of grief in cases of suicide: the sense of disorientation the suicide causes, the struggle to understand the deceased’s reasons, the guilt those left behind feel, and the anger with a loved one who has committed suicide.

Lying To Mom also touches upon the difficulties one faces when wanting to bury the deceased in the family grave. As suicide is considered a sin in Buddhism, the interring of the remains of this family member is often refused because the remains are said to defile the already buried ancestors. The narrative, additionally, touches upon the fact that a suicide within the family often invokes social stigma, influencing how others perceive the family and its members in a negative way (Theme-note 1). That’s the reason why Yuko’s sister Kimiko Suzuki (Kayoko Kishimoto) lies to her boss about the cause of Koichi’s death (Theme-note 2).

While the theme of trauma is important to Nojiri’s narrative, the aspect of the lie and the truth that needs to remain unsaid is, undoubtedly, more important for the narrative’s unfolding. The lie, once vocalized by Fumi, has a lot of consequences. Not only does this lie needs support by those family members closest to Yuko, the lie comes to define their life in general and the interactions with Yuko in particular.

The fact that the lie comes to define their life is most sensible in the fact that to give the lie any credibility, Fumi, Yukio and Fumi’s uncle Hiroshi Yoshino (Nao Omori [First Love (2019)]) are forced to ‘narrativize’ the lie (Narra-note 1). The lie needs support from a narrative. The act of writing letters in Koichi’s name and sending them from Argentina, buying gifts for his mother in his name, dressing up his room in order to evoke Koichi’s pre-existing desire of going to Argentina, and making fake videos featuring Koichi’s Argentinian friends are all elements that ‘narrativize’ the initial lie.

The lie also leads Yuko, in her conversations about Koichi, to unknowingly confront others with matters left unresolved before his death. For instance, when Yuko insists that Fumi should make up with Koichi, she confronts Fumi with something she cannot do anymore as well as with the guilt she feels because of that (Psycho-note 1). The lie, furthermore, disallows Koichi’s death a place within the familial history and forbids Fumi and Yukio to grief about him within the relational network of the family. The lie, in other words, cancels out the important social dimension of mourning but not the truth of his death (Psycho-note 2).

The cinematography of Lying To Mom is fluid due to its reliance on camera movement (Cine-note 1). This reliance is not only evident by the many spatial moving shots and following moving shots used to frame the narrative, but also by the fluidness by which, within one shot, a moment of fixity or semi-fixity can change into a spatial movement or following movement – and return, if necessary, to the initial state. 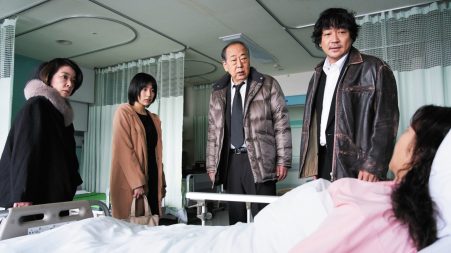 The reliance on generally slow camera movement, together with the use of temporally long shots, gives the fluid composition of Lying To Mom its measured pace (Cine-note 2). The measured pace of the cinematography can be said to be partially responsible for the longer runtime, but there is also another reason. The longer run-time and the measured pace allows Katsumi Nojiri to create a flow that alternates powerful and gripping and raw emotional moments with sequences of much needed emotional rest.

The raw emotionality of certain sequences of Lying To Mom is function of the honest and straightforward way the cinematography emphasizes the character within the narrative space. There is no musical accompaniment nor dramatic cinematographical movement to empower the various emotions, it is just the camera and the actress/actor in question. The raw emotionality is, in other words, function of the performances as such. The evocation of emotions (e.g. guilt, anger, and sadness) is, in truth, so confronting that they become almost unbearable for the spectator (Acting-note 1, music-note 1).

Lying To Mom offers a rich and emotional exploration of the impact a suicide has on familial functioning and the effects a lie has on the process of mourning. While Nojiri misrepresent trauma, he is spot when he touches upon the necessity of the social dimension of mourning. Nojiri subtly shows that without  a supportive social context there can be no mourning. The run-time, in truth, might be too long for some spectators, but Nojiri’s Lying To Mom still offers one of the most profound and rich explorations of the complex process of mourning until date.

Theme-note 2: Another aspect the narrative touches upon is the fact that the death or/and the coma of a family member often reanimates familial tensions. In Lying to Mom, it is the problem of interring Koichi and the question how to handle the continued coma of Yuko that rekindles the frustrations Yuko’s sister has with Fumi’s uncle Hiroshi Yoshino (Nao Omori). Kimiko wants to make decisions, decisions Hiroshi nor Yukio want to make.

Narra-note 1: As the lie necessitates more and more narrative, the changes to make careless mistakes also become bigger. Every mistake has to potential to destroy the complete narrative and expose the lie that lies at its origin. Every mistake forces the creation of more lies.

One mistake Hiroshi and Fumi make, for instance, is thinking that cooked food can be send to Argentina, something that, as Yuko finds out, is impossible.

Psycho-note 1: This unexpected confrontation also causes Fumi to have a panic-attack. This aspect underlines the well-known psychological fact that guilt is often in play in anxiety problems.

Cine-note 1: Of course, fixed shots are used as well. As is often the case with moments of fixity, these shots are applied when the character in focus makes no major horizontal movement. Movement on the vertical plane is often framed with fixity.

Cine-note 2: That a subtle realism marks the framing of the narrative is – maybe surprisingly – neither caused by the camera movement or the length of shots, but by the naturalistic lightning/colour design.

Acting-note 1: One such powerful sequence is Fumi’s monologue addressed to her deceased brother.

Music-note 1: While the prime source of emotionality in Lying To Mom is the acting, i.e. the way actors/actresses bring the emotions of guilt, anger and so on to the fore, the evocation of emotion is subtly empowered by the very smart and thoughtful sound-design.