In 1984, the Pia Film Festival launched the annual PFF scholarship in 1984 in order to nurture new cinematographical talent. From its very start, it has given various directors their first taste of professional film-making. The most well-known directors to have emerged from this program are Sion Sono, Ryosuke Hashiguchi and Yuya Ishii. And, last year, Manabu Oda received the honour to make his first feature film under the professionak guidance of the PFF. 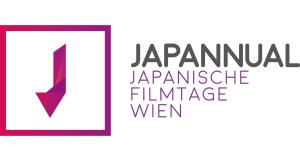 Toru Saimon (Itsuki Sakamoto), a third year student at a vocational high-school, has been in love with  one-brow Tada Takashi (Kenta Suga) from the first time they met. While they have been best friends since then, Saimon never tried to confess his feelings. As graduation nears, Saimon feels that this  precious relationship, who was never an actual romantic relationship to begin with, will end for good.

Takashi, unaware of Saimon’s feelings, has been trying to get a girlfriend (in order to get laid) for ages. One day, after being rejected by Mie (-), Takashi finds his last hope in a bathroom advertisement for Maiko (Yuki Mamiya), a thirty year-old women who is known as a town bike. The desperate Takashi calls her and begs her to meet him.

Saimon & Tada Takashi is a narrative about love. This is already made evident in the beginning of the narrative by revealing Toru Saimon’s position as the lover’s position. Besides being a lover, i.e. one who loves, Saimon is also presented as someone who is insecure about matters of love. His reluctance to confess and to attempt to change his current situation can be explained by this insecurity, an insecurity fueled by this fear of destroying the precious bond they already have. It is therefore not surprising that Saimon, who is insecure about how to advance, asks advice to the girl who just confessed to him, as they both share, structurally speaking, the same position (Narra-note 1, Narra-note 2).

After receiving advice – what to do when the beloved does not love you back, what to do when your beloved loves someone else – from that girl, Saimon, in accordance to her answers, to support his beloved and join him on his road trip to make Maiko his girlfriend and to get laid. 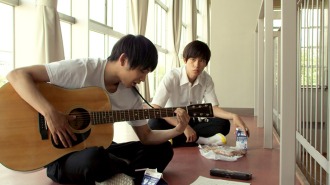 The dimension of love is also sensible in Takashi’s trajectory. He has linked his future with finding a girlfriend, finding a ‘genuine’ way to get laid. For Takashi, the female shape promises a way to escape the ‘hell’ his father’s work as garage owner and life represents, i.e. a life focused on work, a life without the ability to pay sufficient attention to the other sex beyond spending one’s income on conning hostesses. The spectator will feel that Takashi’s desperate search for a girlfriend is driven by his desire to satisfy his libido and not by a genuine desire to meet the woman as Other, as subject.

Saimon’s position of hidden lover and Takashi’s position creates, at least on a structural level, a tension in the narrative. This structural tension can be translated into two questions: Will Saimon be able to convey his feelings and will Takashi, who desires the female body-curves, return Saimon’s feelings or not? While these two questions could have provided an enticing frame for the spectator, Manabu ODa is not able to keep this tension sensible. This ‘failure’ has everything to do with the way Saimon is conceptualized. As he is framed as already having given up on confessing his love, exuding a sad passiveness, a sad contentment with how things are, the aforementioned questions quickly lose their power (Narra-note 3).

The dimension of love is also sensible in the two other narrative threads – the one concerning the bosozoku-styled bicycle gang-leader Yanagida (Kai Inowaki) and his quest to save his scooter-loving Yankee fiancée Chiyo (Hinako Tanaka) as well as the one focusing on Maiko and her struggle to escape her painful romantic past and her reputation as town-bike.

The narrative of Saimon and Tada Takashi is littered with touching and lighthearted moments. The reason why these moments are able to become touching or become lighthearted is all due to Kenta Suga’s performance. Touching moments are, more often than not, function of the charm he exudes with his smile and lightheartedness is generally born from the subtle over-acting by which he brings his character to life (Acting-note 1). It would not be incorrect to state that Kenta Suga’s performance’s carries the narrative and hooks the spectator’s attention. 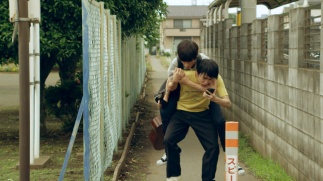 Nevertheless the most striking quirky element concerns the scenes of animation that are inserted in the story’s unfolding. This anime-element is not a mere stylistic decoration but an attempt to visualize Saimon’s subjectivity. What provides proof for this statement is the visual romantification of Tadashi’s first appearance as well as the direct visualization of certain elements in Saimon’s speech, e.g. his comments on the abundance of pimples (Cine-note 2). While these visualizations of subjectivity allows Manabu Oda to bring the emotional world of Saimon to the fore in a more expressive way, these moments do not succeed in making Saimon’s trajectory more touching (Cine-note 3).

Even though Manabu offers a lot of quirkiness, his narrative struggles to attain greatness due to the lack of a more clear narrative focus – what did Manabu Oda try to convey? – as well as a lack of thematical depth. The narrative may features various moving moments and some truly pleasing quirky sequences, its lack of a clear narrative focus makes it neigh impossible for Saimon and Taka Tadashi to transform into a powerful and truly touching whole.

While there is much to like about Saimon and Tada Takashi, its overdependence on quirkiness has made it impossible for the main overarching theme of love to come to full bloom and realize its dramatic potential. Oda may show promise as a director, the lack of a clear narrative focus and his failure to balancing drama, comedy, and romance reveals that he has yet to find his own distinctive voice.

Narra-note 1: Her advice of being supportive of the beloved’s happiness does not lead Saimon to leave his passive position.

While this change is important within the narrative, Manabu does not succeed in making this subjective change sensible enough.

Narra-note 3: The reason why Saimon’s subjective change does not feel like a subjective change is because the vague references to Saimon’s internal conflict – a conflict between hope and hopelessness, are never made explicit enough. Even in his confession, Saimon gives off the impression of already having given up his desire of becoming Takashi’s beloved.

Saimon’s hopelessness is, of course, is born from Tadashi’s strong libidinal fixation on the curves of the female shape.

Narra-note 4: The moment in the finale where Tada sings his song to Maiko is one of the most touching moments of the entire story.

Budget-note 1: While the finale reveals the budget-constraints Manabu Oda faced, this sequence also provided the most clear proof of Manabu Oda’s creativity.

Cine-note 2: The flashback that precedes the first shift to anime is also a visualization of Saimon’s subjectivity.