In 2011, Kore-eda started an initiative with no other purpuse than to nurture young directorial talent in a style very similar to the on-the-job trainings given in studies in the sixties. In 2014, this initiative led to the founding of Bun-Buku, Kore-eda’s own film production and planning company.

Hirose joined the initiative in the same year of its conception and acted as director’s assistant – a role focused on nurturing one’s own cinematographical vision, in productions like Like Father, Like Son (2013) and Our little sister (2015). Now, after many years, Hirose, supported by Bun-buku, takes her first step as director, presenting her debut feature, His lost Name.

One day, Tetsuro (Kaoru Kobayashi), while walking along the riverside, finds a young man washed ashore on the riverbank. Despite not knowing anything about him, Tetsuro, a widower, takes the young man, who tried to commit suicide, home.

The next day, the young man introduces himself as Shinichi (Yuya Yagira). Tetsuro readily accepts him and starts to teach him woodworking skills at his woodworking business. But Shinichi, who is increasingly integrated into the welcoming community, lied about his name, a name attached to a rather traumatic secret. 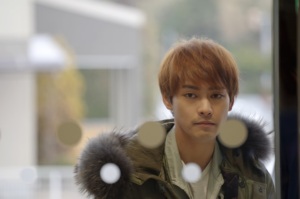 Likewise, Tetsuro is haunted by an unresolved traumatic experience.

The narrative of His Lost Name concerns, from the viewpoint of Shinichi, nothing other than the assumption of one’s name as well as the assuming of one’s place within society, within the symbolic structure of signifiers conditioning the flow of a community. In truth, the narrative – and this reveals Nanako Hirose’s implicit understanding of what governs societal functioning – equating the assumption of one’s name with the realization of a place in society as such. But – and this is the fundamental point of the narrative – assuming one’s name and place is, as identity is embedded within relationships, not without conditions and expectations.

But Shinichi, as is slowly revealed, is afraid to realize his place in society as well as assume his (lost) name. More specifically, he is afraid to let himself be situated by the expectations, the ideal images, of the other(s). This is implied by the instances where Shinichi runs away – minor passage á l’acte’s – and the very passiveness he exhibits at various moments. It is additionally highlighted by the beautiful framing of the psychology of the gift and subjective discomfort Shinichi’s failure of refusing kindness causes.

And even the “suicidal act”, his passage à l’acte that marks the beginning of the narrative, evokes the core problem of subjectivity he suffers from. In other words, this act has to be read as nothing other than a refusal of a place in society. While this act is fundamentally tied up with Shinichi’s past traumatic act, this act only receives its true meaning when the puzzle pieces of the narrative fall in place – puzzle pieces evoking Shinichi’s past as echoed by the narrative exploration of the problematic professional relationship between the young worker and owner of the Izakaya. Besides implying Shinichi’s past in a rather implicit way, the problematic relationship mentioned above further evokes the malaise of contemporary young-adults in Japanese society, i.e. the very difficulty of attaining a place in society, a place never void of societal and personal expectations/ideals (Narra-note 1).

Seen from Tetsuro’s viewpoint, the narrative, besides framing the dying craft of the craftsman, gives him a second try at being a father. The appearance of gives him a possibility to avoid or mend any former mistakes he made (narra-note 2 (spoiler))

Because of the slow build-up – the narrative slowly shifting from strange slice-of-life styled narrative into a subtle evocation of subjective impediment of Shinichi, the narrative only becomes truly engaging and interesting as it enters its second half. The slow build-up of the narrative is directly function of the ambitious nature of Hirose’s project. His Lost Name focuses on evoking emotions and subjectivity visually rather than making these aspects explicit through speech-acts (Narra-note 3 (spoiler)). While this works great for the most part, various moments could have use more sensible emotion as to highlight Shinichi and Tetsuro’s respective subjective problems more sensible. If Hirose can find a better way to let silence as punctuated by acts of speech and speech as punctuated by silence speak – something she surely will in the future – than she will be able to make her evocative narrative style even more powerful (General-note 1, Cine-note 1).

His Lost Name’s narrative is almost exclusively framed with shaky shots – be it moving or fixed. In the case of Hirose’s narrative, the trembling frame and and the tracking movement has no other aim than to underline the subjectivity of Shinichi and Tetsuyo (Cine-note 2).

Another aspect worth mentioning is cinematographical evolution present in the narrative, i.e. the relative evolution from framing the back of certain characters towards framing their front. While this evolution aims to mirror the change in understanding their subjectivities, e.g. the (un)conscious motives hat drives them, is often too subtle to be truly communicative, it nevertheless reveals a director with a vision, director that aims to use images thoughtfully and exploit them as elements of communication as such (cine-note 3).

His Lost Name, all things considered, should be considered a successful debut for Nanako Hirose. While not everything works out perfectly, i.e. the sensible highlighting of the unsaid, one can still feel that Hirose has a strong command of how narrative structure functions – developing the narrative through subtle placed evocations – and has a clear cinematographical vision. In short, with His Lost Name Nanako Hirose reveals her abundance of potential, a potential that will surely come to full realization in her future cinematographical narratives.

Cine-note 1: The two shots of flying birds, one at the opening of the narrative and one at the end of the narrative, are the most evocative. They call for interpretation by the spectator. While the first is easily situated, the second evokes the question if something truly changed, if Shinichi underwent a subjective change.

Cine-Note 2: There is one instance in the narrative, where the cinematography shifts into fluid movement. This concatenation of fluid shots, sensible evokes, by its very contrast, the lack of subjective determination.

Cine-note 3: We do have to highlight that Hirose does not fail to mix some lighthearted moments into her narrative.

Narra-note 1: We can read the relationship between the young worker and the shop’s owner also from the owner’s perspective. While his behaviour towards his employee is problematic, the young worker, from his perspective, fails to take his work and his responsibilities seriously.

Narra-Note 2: It should be noted that Shinichi purposefully plays along with Tetsuro’s positioning of him as his lost son, who was also called Shinichi. Only when this positioning gets too real, it becomes problematic.

Furthermore, when Tetsuro repeats his mistake – hitting Shinichi – his apology is not so much directed at the subject he actually hit, but the son he could never apologize to.

Narra-note 3: The finale is evocative and, as such, open to various interpretations. In our interpretation, Shinichi finally comes to accept his lost name and realize a place in Tetsuro’s community.

It is especially the Japanese title, dawn, that is able to bring the interpretative nature to the fore, whereas the English title suggest that the solution that dawns on him concers his lost name.

General-Note 1: In this respect, Hirose, who has been director’s assistent on Miwa Nishikawa’s The Long Excuse (2016), could learn even more from Nishikawa. Especially in Yureru (2006), Nishikawa proves to be a master of making silence evocative of subjectivity.