While Ryusuke Hamaguchi had already made various narratives before 2015, it was only in 2015, with his bold Happy Hour – a 317-minute narrative born out a improvisational acting workshop for non-professionals, that he sealed his international reputation as promising Japanese director.

Three years after his bold entrance, Asako I & II, a narrative based on Tomoko Shibasaki’s novel Nete mo samete mo (2010), was instantly selected to compete for the Palme D’or in Cannes.

One day, at an exhibition of Shigeo Kocho in Osaka, Asako Izumiya (Erika Karate) follows a rather mysterious guy whom she feels attracted to. By mere chance, their eyes meet. Not long thereafter, their lips meet as well. Haruyo (Sairi Itoh), Asako’s friend, warns her that Baku (Masahiro Higashide) is bad news, that he is a heart-breaker. But Asako, deeply in love, ignores her completely. Nobu Okazaki (Daichi Watanabe), a friend of both Asako and Baku, for that matter, sees no problem with their coupling either.

One night, whilst enjoying themselves at Nobu Okazaki’s place, Baku suddenly decides to go out and buy cream-bread at the convenience store, leaving Nobu, Nobu’s mother and Asako behind. The next morning, Asako realizes that he has not yet returned. Even though Baku eventually returns, a similar event, six months later, marks his definite disappearance. Two years after this event, Asako meets, by mere chance, Ryohei Maruko, Baku’s perfect double.

While Asako I & II is ultimately a rather un-dramatic narrative that philosophizes about the relationship between the body-image, the image as what attracts one to another, and love as such, it starts of as a rather mundane slice-of-life romance narrative with a twist. This slice-of-life approach is evident in the way therelationships between Baku and Asako as well as between Asako and Ryohei are framed. But despite this similarity, both framings are different in emphasis.

The framing of the youthful relationship between Baku and Asako is focused on keeping the vagabond mysterious and inaccessible for the spectator – only his name, denoting wheat, is indicative of his swaying personality. As he is kept mysterious for the spectator, the attraction of Asako remains, as a logical effect, opaque as well (Narra-note 1). By way of this double opaqueness the first axis of the narrative is introduced: the very superficiality so characteristic of being-in-love. As being-in-love finds its support in the imaginary – the ideal image we construct of the loved-other – it often leads to a far-reaching blindness of the other’s otherness. While Asako’s blindness is clearly presented, it is only truly highlighted – and this is one strength of the narrative – as we, the spectator, in contrast to the enamored Asako, are able to feel Baku’s otherness (Music-note 1).

The Otherness of Baku reaches its climax with his disappearance. Baku’s disappearance, as is beautifully shown in the narrative, alters Asako’s way of being in society – the trauma of Otherness, of the un-explainable empty space his disappearance and his subjectivity causes, defines her subjective path. Meeting Ryohei unsurprisingly constitutes another confrontation with Otherness – an Otherness only Asako directly feels. The confrontation with the very distance between the idealized image of Baku and the present ‘reality’ of Ryohei has no other effect than silencing Asako’s voice as well as her ears. As such, Asako’s come-back-into-love is only possible if she enables her voice to speak in Ryohei’s presence and her ears to hear what Ryohei says (Narra-note 2 (spoiler), Narra-note 3). In other words, only by way of the signifier is Asako able to bury the lingering memory of her first love Baku and able to meet and come to love the particular subjectivity of Ryohei.

In the framing of Asako and Ryohei’s relationship the focus is not on the otherness of her lover, but on the shared life of Ryohei and Asako in general and the small moments of intimacy – the signifiers of love – as such. The latter is framed in a realistic way, rather than dramatizing the romantic moments so often characteristic of Japanese romance cinema. 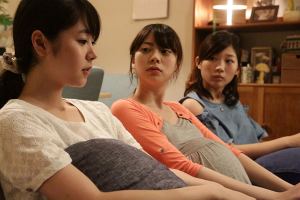 There is nevertheless a second otherness present in the narrative, an otherness concerning Asako. She – her mental process – is rendered rather opaque for the spectator. In truth, one might even argue that Hamaguchi renders Asako opaque to herself. Nevertheless, Asako’s coming-to-realization, her subjective path, is defined by two speech-acts (See Narra-note 3 for the first speech act). The final speech-act concerns the very question what, for her, is the ideal life-situation – a question that, in the very same movement, concerns the very fundament of love (Narra-note 4 (spoiler)).

The signifiers of love, situated between the two speech-acts, are only able to receive their meaning as signifiers when Baku returns. Furthermore, his return – a return that resurfaces the lingering images of their romance and re-instates Asako’s inner conflict – is the central plot-element that unearths the most fundamental message this narrative has to offer: the fact that even though the image is ever in play in the game of love, love has to be situated beyond the image as such (Narra-note 5). But alas, the spectator is not allowed to feel this message as powerfully as should have been. While Hamaguchi has to be applauded for his anti-melodramatic vision, he realized it too well. As a result, the speech-acts and the signifiers of love – the central elements of the narrative – lack the necessary emotional weight, thus failing to make Asako’s coming-to-realization and the message of love as beyond the image truly sensible. 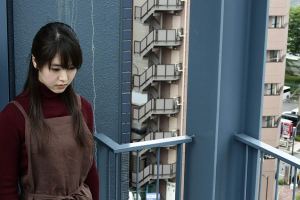 The cinematography of Asako I & II is used to emphasize, through (semi-)fixed shots as well as through camera movement – be it tracking or moving as such, the two main characters of the narrative (cine-note 1). The first character emphasized in this way is of course Asako. It is beautiful to see how the subtle use of the moving shot, besides establishing her as the first main character, also sensibly highlights elements of Asako’s subjectivity, e.g. Asako’s attraction to her first lover (Cine-note 2). The second character revealed as main character is Ryohei Maruko. While these following shots emphasize him as such, we should also note that some of these shots, by framing Ryohei, emphasize Asako in relation to his presence (Cine-Note 3).

While the use of movement is used thoughtfully, the true beauty of the cinematography has to be situated in its effective use of two single cinematographical elements. The first one is the single use of slow-motion that frames the first meeting of Asako’s and her Baku’s eyes – note that the use of slow-motion, besides infusing cinematographically some romanticism, should first and foremost be read as a “subjectivication” of their first encounter from the perspective of Asako. The second single element is the zoom-out. Because of its one-time use, Hamaguchi is able to underline Baku’s act of leaving as a meaningful event.

Even though the narrative fails to make the subjective evolution of Asako deeply felt, this cannot be attributed to the performanceso of Erika Karate and Higashida which are great. Erika Karate succesfully exploits her kawaii appearance to bring the shy and innocent nature of her character touchingly and endearingly to the fore. Furthermore, she also succeeds in highlighting the inner-conflict Ryohei’s presence and, later in the narrative, Baku’s re-appearance causes. Higashida, for that matter, proves his versatility in acting by bringing the two different personalities believable to the fore (Acting-Note 1).

Asako I & II is a rather unconventional love narrative and is as such not for everyone. Instead of delving into emotions, it is a narrative that has to be read at the surface level. Only at the surface level, the narrative is able to reveal itself as a subtle but purified tale of subjective realization – the speech-acts – and what communicates love – the signifiers of love. But unfortunately Hamaguchi forgets to infuse his narrative with some more honest emotionality that would have made the message of the narrative so much more powerful. While Asako I & II avoids cheap melodrama – and in this respect also moments for heartfelt drama, the emotionally subdued finale is still able to ‘unsettle’ – evoke a rather annoying sadness – and touch the spectator in a sensible way. Asako I & II is far from perfect, but this subtle narrative still breaths much needed fresh air into the rather stale genre of Japanese romance narrative.

Narra-note 1: The repeated framing of Haruyo’s doubts concerning Baku in the opening moments of the narrative emphasizes his mysteriousness as well as acting as a lingering reminder of the possible sad fate her best friend awaits her.

Narra-note 2: Ryohei’s kiss is an act that cuts right into Asako’s inner conflict. In other words, this kiss, this shared intimacy, has no other effect than emphasizing the distance between the idealized image of Baku and the being of Ryohei as such. That Asako sees no other choice than to flee is a direct result from the fact that she has yet to come to terms with the loss of Baku, a loss emphasized by Ryohei’s appearance.

Music-note 1: Especially in the beginning of the narrative, when framing Baku’s and Asako’s relationship music is applied. Besides having a rather nostalgic mood, the music infuses the framing of their relationship with a subdued atmosphere of happiness and comfort.

Narra-note 3: Asako’s coming-back-into-love only truly starts from the moment she is able to use the signifier “Ryohei”, a signifier radically different from the signifier Baku.

Narra-note 4: The narrative plays with the signifiers dream and reality. Asako comes to realize the reality in her dream/ideal relationship with Baku and realize the dream/ideal quality in the reality of her relationship with Ryohei. Concerning the former, Asako has to realize that her memory is but an idealization of something that never will be as it was for the very reason that it never was that what it is in its idealized remembered form.

Narra-Note 5: The fact that Baku returns to Asako so to be able to start from where they left of, is as the cinematographical framing suggests nothing other than a desirable ‘nightmare’. In other words, while his reality, as linked with the traumatic event of his departure as well as precious time they spend together, is unwelcome, it also rekindles (her memory of) her old feelings.

Cine-Note 1: The fluidity of movement is departed when framing instances of travelling, e.g. by bike, and to frame the 2011 Tohoku earthquake. To frame these instances shaky shots and shaky moving shots – shots highlighting the movement, the act of travelling as such – are used.

Note that the shaky shot is also once applied as a subjective shot – a shot from Asako’s perspective.

Cine-note 2: Nevertheless, there are various instances where another character’s comportment is cinematographically followed as such, e.g. Nobu, Asako’s roommate Maya, … etc., cinematographical movement is used to introduce a given scene. In the former case, Asako is only of secondary importance.

Cine-note 3: The reason why Asako remains the main focus in this shots is precisely because the camera movement doubles the movement of her gaze. [To be comprehensive, we should note that such kind of following shot is also applied earlier in the narrative in relation to Baku.]

Acting-Note 1: We should not forget to praise the performances of both Koji Seta and Rio Yamashita, as both are central to the most tense scene of the narrative.