As the year’s end nears, the year reaching its conclusion, it is time to present our top 10 Japanese movies of this year. It was an adventurous year, not only on a personal level, but also on a cinematographical level. Japanese cinema, despite keeping mass-producing live-action productions, pleased us by bringing a wide variety of narratives to the silver screen. Of course, our list reflects this pleasing variety.

As not all movies could make the top 10, we decided to give an honorable mention to three movies. These movies, despite not making the numbered list, should be on every Japanese movie-lover’s to-watch-list.

Dance With Me is an extremely fun musical comedic experience. While the somewhat unconventional elements lead to a predictable finale, this predictability does not matter at all, as one is able to happily drift on the enticing fun oozing from the narrative ride as such. In other words, due to the successful mutually empowering marriage between imagery and music, a marriage supported by Miyoshi’s performance, Dance With Me has become one of the most pleasing musical experiences of recent years and one fine encouragement to people to find and do what they love.

HIKARI’s 37 seconds is a honest and heartwarming narrative about securing a place for one’s subjectivity in society by exploring one’s sexuality and breaking the subjectively asphyxiating relation between mother and daughter. Even though a certain amateurism marks Mei Kayama’s performance, this amateurism actually empowers the framing of Yuma’s coming-into-being. As Yuma’s process of securing a place for herself coincides with Kayama’s process of becoming more confident in herself, as both ‘stories’ coincide, 37 Seconds attains a emotional power that does not fail to resonate with the spectator.

Sion Sono’s Forest Of Love is a true Sono narrative. Not only because it explores, like in many of his narratives, the interplay between power, violence, and enjoyment but also because he succeeds, with his characteristic poetic lyricism, in confronting the spectator with the problematic darkness inherent to the interplay of these three elements. Forest of Love might not be an easy watch, but it is a compelling and emotional powerful exploration of the darkness of the human being and his sexuality. 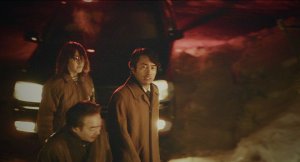 With its dreary and downright depressing atmosphere – no ray of sunshine to be seen, Red Snow ventures, in a psychological way, into the complex domain of truth. While this may put some people off, those that give the narrative a chance will become captivated by its moving evocation of the tension between speech and truth – a conflict sensibly highlighted by the evocative anti-climax. Red Snow might only be Sayaka Kai’s first feature-length narrative, but what she has crafted is truly impressive.

Michihito Fujii, with his talent, has turned Day and Night into an impressive narrative. While this impressiveness of course finds its foundation in the very pleasing framing of the narrative spaces, the colour-design, and the highly effective musical accompaniment, its true impressiveness lies in the touching and slightly devastating way in which it reveals the perverting effect power has on justice. While Day And Night is not an easy watch – an uneasiness born from our sense of justice, it still is one of the most effective drama narratives of this year.

Tsubota’s Stolen is, in short, this year’s indie-gem. Not only is his narrative a powerful critique on the perverse sides of media and the destructive power their insatiable desire for drama has, Stolen is, at the same time one of the most touching and a-political statement on the importance of familial bonds in dealing with loss, a loss that impacts each family member differently.

Blue Hour is a wonderful narrative about the ways in which a subject can organize his own misery. The narrative beautifully shows how the distance Yuka installs between her and the other acts as the origin of her dissatisfaction. With her impressive and touching debut – one of the most beautiful examples of how thoughtful cinematography can empower the performances of the actors/actresses, Yuko Hakota reveals herself as one very promising director.

With Cry, Watanabe has delivered his most experimental and most pure slice-of-life narrative yet. While this radicalization makes it more difficult for spectators to get into the narrative, those spectators that succeed will discover a strangely powerful narrative on life’s monotonous cyclicity. The power of the narrative is born from Watanabe’s play with visual and musical repetition, a formalistic play that confronts the spectator with the cyclicity that grounds his life as well as the life of every other human being. 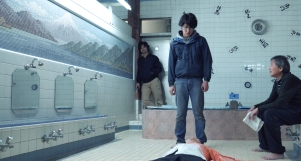 Melancholic is an amazing debut by Seiji Tanaka. By mixing crime, romance, friendship, and a pinch of violence into a coming-of-age narrative, Tanaka has succeeded in crafting a truly entertaining statement against oppressive control and the importance of finding, on one’s own subjective account, moments of happiness, which are ever relational in nature. One can only do right by this new talent, by watching his touching and, in essence, humanistic narrative.

Chiwawa is another extraordinary narrative from Ken Ninomiya. With a precise cinematographical hand, he leads the spectator, via the mesmerizing and poetic framing of the excesses of enjoyment and the sparkling quality of the image, to a confrontation with a rather confronting truth about the contemporary relationships: the lack of investing in inter-subjective bonds and the lack of interest in the other as Other. With Chiwawa, Ken Ninomiya reconfirms his extra-ordinary talent, proving he is truly one of a kind.

His Bad Blood is a truly amazing coming-of-age narrative. This is, in first instance, not due to the fine acting, the masterful cinematography or the effective musical accompaniment, but due to the crystal-clear way in which Oyama uncovers, as psycho-analysts well know, the problem of fatherhood and its only functional solution. If there is one narrative that one needs to see this year, besides Ninomiya’s Chiwawa, it is Oyama’s fabulous debut.