While Okinawa is a beloved vacation destination for many, it has not been such an attractive place for shooting entire movies. One of the reasons for this might be that Okinawa, with respect to the main image of Japanese culture, Okinawa functions, in various respects, as an outlier. With Okinawan Blue, Kishimoto Tsukasa, himself an Okinawan, allows the spectator a fresh look into the beauty of the Okinawan islands.

When photographer Christophe (Daniel Lopez) needs to visit Okinawa for his work, his fiancé Meg (Rino Nakasone), who is of Okinawan descent, decides to join him to explore her grandmother’s birthplace. Arrived at one of the smaller islands, Yuhi (Shogen), who works for the Full Moon Hotel, a local hotel run by Hana Hanashiro (Taeko Yoshida), comes to pick them up. As Christophe and Meg do not know any Japanese, communication becomes very difficult.

Around the same time, Yoshiya (Takashi Nishina), wanted for embezzling 100 million yen, and his girlfriend Sen (Canae Akamine) arrive on the island. As his time is limited, Yoshiya’s return to Okinawa is primarily in order to say goodbye to his son. The night they arrive on the island, Yoshiya’s brother Chuya (Akira Fukuhara), who all this time cared for Makoto (Rosa Fukuhara), does not allow his brother to meet his son.

Ao (Natsu Ikema), the local car and boat technician, and her father and Sabani carpenter Natsuki (Masaya Kato), are met with an ill event. Kyoko, Ao’s mother and Natsuki’s wife, left the island with Takeichi (Shinya Arakaki) in order to start a life together. But, only a day after having eloped with Natsuki’s wife, Takeichi returns.

If there is one thing that Okinawan Blue has succeeded in, it is finding a pleasing balance between lightheartedness and drama for the unfolding of the narrative. This balance is not only found within a certain narrative – each narrative is marked by drama, but in the concatenation of the narratives as a whole – the lightheartedness subtle making way for more intimate drama. The structure of the narrative might surprise some – putting three narrative chronologically while they happen at the very some moment, but there are clear motivations governing this structure. With each narrative, we as spectator, are allowed deeper into the intimacy – and the drama as mentioned above – of the community. By discussing each narrative in turn, both at the level of its drama and lightheartedness and the themes it touches upon, one will come to sense this duplicated vertical orientation. 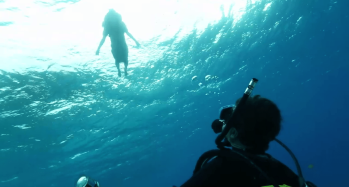 The lightheartedness of the first narrative is obviously grounded in the communication problems between the foreign couple and the owners of Full Moon Hotel. Even though one can see that gestures can be somewhat communicative, the lack of a shared language – the inability to truly enter the field of understanding – creates not-so-subtle but ever funny rifts in communication (Narra-note 1). The great thing about this lightheartedness is that it never feels forced, that it is born naturally from the very failure of communication, the continued attempts, despite failure, to interact, and those moments where something of communication is able to be established – a possibility often function of the very import of English words into the Japanese vocabulary (Narra-note 2).

While this narrative is the most lighthearted of the three, there is some contrasting relational drama present as well. In a rather ‘funny’ twist, Christophe and Meg are revealed as having, despite the language they share, problems of meeting each other in an inter-subjective way. In truth, it is the dislike of Japan that Christophe has, that renders him unable to value Meg’s subjectivity – her interest in her origin. Can Christophe’s subjective position change by facing the impressive beauty of Okinawan sea (Narra-note 3)? That’s the question.

In the second narrative, the lightheartedness is not born from communication problems but from the inner dynamics of the conversations as such. While true comedy is diminished, the lighthearted mood of the narrative subtly persists. As this narrative doesn’t concern tourism, the spectator is allowed a deeper look into the lives of the islanders and, as such into the particular ways small in which communities function. The fundamental tension that drives this narrative is the tension between putting the protection of one’s community – the insiders – before everything and one’s official duties.

While the drama had a minor role in the previous narrative, drama plays a much more important role in the second narrative – an equal mix between drama and lightheartedness. Beyond the ‘drama’ of Yoshiya being a criminal,  the true drama of this narrative situates itself between father and son. To put it more concretely, the drama is that of a son denying its biological father the symbolic status of father – a denying that also, albeit in a somewhat superficial way, touches upon what constitutes a father on a symbolical level. The question in his narrative concerns the possibility for Yoshiya to establish a bond with his son.

The third narrative – a narrative where drama has overtaken lightheartedness – concerns the impact of Kyoko’s and Takeichi’s affair. In this narrative, another aspect of the inner-working of a local community is laid bare: the gossip that is born from an event, like eloping with another man, that ripples the fabric of the community as such. The drama in this narrative is not so much situated in the eloping as such, but in the secondary ripple that Takeichi’s solitary return causes in the community – a return that will also impact the subjectivity of Natsuki (Narra-note 4). Of the three narratives, this narrative is the most dramatic – while glances of lightheartedness swiftly pass, the dulls sounds of punches resounds sensibly throughout this narrative. By virtue of the dramatics, this narrative is also able to become a touching closure of the narrative as a whole(Narra-note 5).

While Okinawa forms the background of the three narratives, each narrative introduces the Kerama Islands of Okinawa in its own way – be it by showing its nature (vistas of the island or the hidden beauty of the sea), the Okinawan cuisine (Pomnikasa, Awamori, Inamuruchi), or some of its culture (Sabani carpentry) and language. Despite the change of mood throughout the unfolding of the narrative, Kishimoto succeeded in framing the beauty of Okinawa and the Okinawan culture in such way that (non-okinawan) spectators are able to meet Okinawa as an alluring vacation destination. 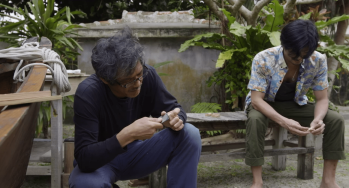 The cinematography of Okinawan blue consists of a normal mix of fluid (and often subtle) moving shots, following movement, and fixed shots. While this defines the general tendency of the cinematography, the cinematographical mix is a bit more complex than is implied by our former statement (cine-note 1). We can also discern some tendencies at the level of the shot. Fixity in the cinematography generally focuses on framing conversations as well as on emphasizing, by a pausing movement, the beauty of the Okinawan setting. Moving shots, for that matter, also aim to introduce the beauty of Okinawa, but, in some cases, subtle horizontal movement is also used to support the framing of conversations or of certain interactions (Cine-note 2).

As Okinawa as setting is central to Okinawan Blue’s narrative development, it’s great to see that the cinematography truly supports the introduction of Okinawa’s beauty. Through floating moving shots and fixed shots, the mesmerizing beauty of the Okinawan paradise is vividly shown. The cinematography is also instrumental in supporting the lightheartedness that is mainly born from the visual – another source of lightheartedness, one not mentioned before. In the case of framing such visual lightheartedness, a lightheartedness ever a function of visual surprise – a element of surprise introduced through facial expressions, strange interactions, or unexpected situations – one will quickly see that such element of surprise is ever framed with fixed shots (Cine-note 3, Music-note 1).

Narra-note 1: It is funny to see how Yuhi, in his laid-back style, keeps on babbling in Japanese to his guests who have no Japanese ability at all and how a simple act of giving some Okinawan sweets gives rise to a situation where each person speaks in relation to the replies of the other one cannot understand.

Narra-note 2: The character of Yuna is deepened by each narrative of Okinawan Blue. In the first narrative, she appears in the guise of a translator – the one who knows some English. In the second narrative, she is revealed as having a position within the restaurant of Yuya.

Narra-note 3: To answer our own question, yes, he will change. Besides becoming able to enjoy Okinawa, he is suddenly able to value Meg’s subjective position – be it as his fiancé or her coming-into-touch with her Okinawan roots.

Narra-note 5: Note that the signifier “mazui” in the final shot of this narrative evokes, by its repetition, as much the father’s cooking skills as the situation Kyoko has left them. Due to the insistence of the signifier, this final shot is able to a heartfelt conclusion to the their narrative.

Cine-note 2: Sometimes vertical movement is applied as well. This in order to shift the spectator’s attention within a shot or to add some variety in framing conversations.

Music-note 1: The traditional music that supports the unfolding of the narrative further succeeds in emphasizes the wondrous beauty of the Okinawan setting.