Another year, another film by Hirobumi Watanabe and his family business, Foolish Piggies film. Having won the Japanese Cinema Splash Film Award at the Tokyo International Film Festival (TIFF), we at psycho-cinematography were, of course, eager to review Watanabe’s latest.

[We would like to thank Watanabe’s grandmother, who passed away in August at the age of 102, for her contributions to Watanabe’s cinematographical oeuvre. ]

With Cry, Watanabe delivers another one of his (fictional) slice-of-life narrative starring himself. But, in contrast to his earlier slice-of-life narratives, Watanabe’s latest radicalizes the genre by refusing to give the visualisation of his life as a pig farmer an over-arching narrative frame. In other words, the only ‘narrative’ the spectator is given is the concatenation of tasks (e.g. feeding the pigs and cleaning the stables) and pastime (e.g. reading books and going to the cinema) that gives Watanabe’s life as pig farmer its daily rhythm (Narra-note 1). The only element that gives the staging of his daily rhythm as pig keeper external structure is the chapter-like division that divides the Cry in seven days. This temporal division, besides temporally structuring the concatenation of shots, further emphasizes the narrative’s focus on rhythm as such. This rather experimental focus on rhythm, a rhythm marked by an abundance of visual repetition, turns Watanabe’s slice-of-life narrative into a meditative narrative of the repetitive cyclicity of life as such.

The experimental nature of Cry is also evident it its approach to speech. Contrary to Watanabe’s previous narratives which monologues and meandering speech (see for instance our review of Life Finds its Way (2018)), Cry is almost entirely devoid of speech. Hirobumi Watanabe’s position of pig-farmer is only introduced by way of the concatenation of shots. Cry is a visual experience.

The surprise of the spectator effectively underlines the self-referential dynamic that underpins most of Watanabe’s narratives. As Hirobumi Watanabe is a director that fictionalized himself in his slice-of-life narratives, the spectator is always forced to question why Watanabe chose to fictionalize himself in this particular way. This time around, formulating an answer to this question is difficult, as the Watanabe does not give any reason or any context that might explain his surprising position. In our view, Watanabe plays himself as pig-farmer in order to touch upon the cyclicity of human life as such. 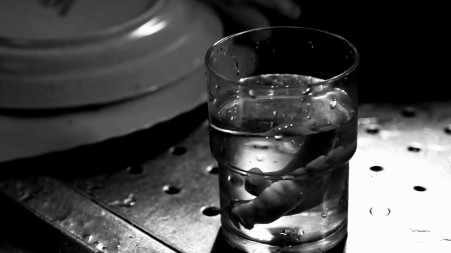 While one can read the little day-to-day differences, such as Watanabe’s Sunday cinema visit, as adding variety to the daily monotony that marks the life of the pig farmer, many of these aspects ultimately point towards a repetitive cyclicity at the level of the week. It is, for instance, not unrealistic to suppose that Watanabe’s fixed cinema day is the Sunday.

Another question we need to pose concerns the ownership of the cry. To whom does the cry ultimately belongs to? While the opening of the narrative clearly associates the cry with the pigs, can we not associate the cry with Watanabe and, at the limit, with the spectator? Does the crying of the pigs, a crying emphasizing their own cyclic monotony, not vocalize Watanabe’s subconscious and unpronounced cry? Does their endless crying of the pigs not reverberate Watanabe’s not-yet-assumed desire to escape the cyclic monotony of farm-life? And is the impact of Watanabe’s narrative on the spectator not function of the visual duplicity of cyclicity, a duplicity subtly confronting the spectator with the repetitive cyclicity that marks his day-to-day life? Is Cry not a narrative that confronts us with the structural similarities between the captive position of the pig and the master that needs to care for them?

While previous narratives of Watanabe were mostly framed with fixed shots, Cry subtly departs from Watanabe’s usual compositions by adding more movement – spatially as well as following movement – into the cinematographical mix (Cine-note 1). Another difference is to be found in the trembling frame that marks most of the narrative’s framing. It is this tremble that gives Cry its rather unique style of home-made naturalism. In truth, this unique style of home-made naturalism marks Watanabe’s other narratives as well, but it is the first time that this naturalism is emphasized by way of a framing tremble.

Another element, an element also featured in Watanabe’s previous narratives, that supports the home-made naturalism of Cry is the temporally long shot. One could even say that the diminishing of the amount of cuts also diminish the ‘stylish artificiality’ of the composition (Cine-note 2). Watanabe’s cinema, as is corroborated by his cinematographical style, is always straight-forward and honest. But, while this cinematographical honesty is evident in Cry, Watanabe’s insistence on visual repetition subtly formalizes the home-made naturalism around the notion of cyclicity.

There is, in fact, only one decoration in Watanabe’s latest: music (Sound-note 1). At certain points in the narrative, i.e. those moments where Watanabe is walking home after work, rhythmical drum-music accompanies the Cry’s framing. This music, not only by being rhythmical but also be being exactly the same every time its applied, subtly empowers Watanabe’s focus on the rhythmical monotony of a pig farmer’s daily life. There is, nevertheless, one day where another kind of music is used. The piece of classical piece that accompanies the framing of Sunday breaks the daily musical repetition as well as echoing the week repetition of taking a rest.

With Cry, Watanabe has delivered his most experimental and most pure slice-of-life narrative yet. While this radicalization makes it more difficult for spectators to get into the narrative, those spectators that succeed will discover a strangely powerful narrative on life’s monotonous cyclicity. The power of the narrative is born from Watanabe’s play with visual and musical repetition, a formalistic play that confronts the spectator with the cyclicity that grounds his life as well as the life of every other human being.

Narra-note 1: At the same time, we are given Insight in the various (but repetitive) behaviours of penned-up pigs.

Cine-note 2: What we aim to convey with stylish artificiality is the fact that Watanabe never indulges in cinematographical extravagance. His style is devoid of visual decorations and aims to frame his personal stories in a direct manner.

Sound-note 1: The lack of decent sound-equipment is more apparent than ever. Watanabe’s latest is full of sound-artifacts, due to the interplay between the wind and the camera’s microphone. While the narrative would have been better without these artifacts, it is not a major annoyance.