After shooting numerous commercial videos for Toyota, Shiseido, and Google, among others, Yuko Hakota, by winning the Jury Special Award of the Tsutaya Creators’ Program for her project-idea in 2016, received the change to turn this project idea into her first feature film.

Sunada (Kaho), a 30-years-old CM director, is not satisfied with either her marriage or work. One day, while being in the car of her friend Asami Kiyoura (Shim Eun-Kyung), Sunada receives a call from her mother asking when she’ll come to visit her grandmother. Asami, who overhears the conversation, promptly decides to drive her friend to her parents’ house in Ibaraki. Her parents, both farmers, are surprised by the sudden appearance of her daughter (Narra-note 1).

That Yuka’s life is marked by unhappiness is immediately touched upon by opening the narrative by with her infidelity. Even though this infidelity implies a certain dissatisfaction with her marriage, it’s important to underline that Sunada, in her speech interactions with her lover, hides this dissatisfaction. The implications of her statement of ‘My husband is great’ are twofold. At one level it implies that she has yet to assume her state of unhappiness, while, at another level, it implies her interaction with her partner-in-crime remain superficial. 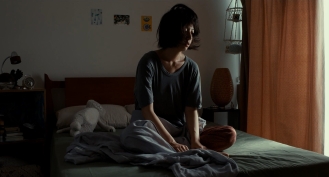 Her work as a CM director also fails to bring her happiness. While she is less able to hide her discontentment/agitation at her work, she is never able to express her annoyances in a direct way. Whether on the phone or against her colleagues, Sunada either delivers her annoyances with some cynical comedy or retracts, with a subtle comical flair, the truth of her displeasure as soon as she has formulated it.

It should be evident that Yuka, by avoiding to express her true feelings, keeps the other(s) at a distance. The unhappiness that marks Yuka can thus be said to be function of the distance she keeps between her subject and the other.

The first time when she is confronted with her lingering unhappiness/loneliness is when her comments about her feature – e.g. her refusal to start a family – leads a colleague to ask her why she is married. This question has no other effect that confront Sunada with her own subjective position, her own position of being dissatisfied with her life. But far from , she annuls this confrontation with alcohol and karaoke. The second time she is confronted with her unhappiness is when the mama of a local bar asks her why she is smiling. This question, by putting the honesty of the smile in question, forces her to recognize the lying quality of her smile.

Due this confrontations Blue hour successfully uncovers the imaginary and symbolic ways the subject employs to evade the confrontation with one’s own unhappiness/loneliness – the subject as director of his own misery. The distance Yuka keeps to others is nothing other than the distance she keeps to herself. One can only let another come close, by allowing oneself to become close to one’s subjectivity.

The flashbacks to her childhood, memories ever circling around life and death, should be read as the return of the repressed. These memories have no other goal than to underline the loneness that marks her subject. Given the pressing nature of her memories, will Yuka be able to realize her loneliness, realize that her unhappiness was function of her own refusal of closeness (Narra-note 2 (spoiler))?

Even though spatial moving shots are present in the cinematographical mix of Blue Hour, one quickly realizes that the choice for cinematographical movement or fixity depends on the presence or absence of movement of the most important character within a given narrative space (Cine-note 1).

What’s most pleasant about Blue Hour is the rhythm by which the narrative unfolds. But what makes the rhythm of the narrative truly special is the fact that is has a function beyond merely creating a pleasant flow. The rhythm, as created by the cinematographical composition and supported by the musical accompaniment, is also instrumental in expressing the emotional dimension of Yuka Sunada and/or Asami (Cine-note 2). The fact that the narrative rhythm succeeds in both elements, reveals Yuko Hakota’s talent in staging a narrative.

Another aspect that makes the narrative so enjoyable is the on-screen chemistry between Kaho, who portrays the somewhat inhibited Yuka Sunada, and Shim Eun-Kyung, who plays the happy-go-lucky Asami. The nuance that both actresses infuse into the portrayals of their characters successfully gives their interactions a charming and satisfying naturalness.

Blue Hour is a wonderful narrative about the ways in which a subject can organize his own misery. The narrative beautifully shows how the distance Yuka installs between her and the other acts as the origin of her dissatisfaction. With her impressive and touching debut – one of the most beautiful examples of how thoughtful cinematography can empower the performances of the actors/actresses, Yuko Hakota reveals herself as one very promising director.

Cine-note 1: Following movement is either fluid or shaky in nature.

Cine-note 2: The ‘fun but silly’ side of Asami’s personality is emphasized by the use of comedic sounds.

Narra-note 1: What Yuka meets at home is her family as slightly dysfunctional. Her mother Toshiko Sunada (Kaho Minami), left alone to deal with works on the farm, refuses to cook her husband and her son. Her father, Koichi (Denden), for his part, has started collecting all sort of antiques, like samurai paraphernalia, and has, according to her brother Sumio (Daisuke Kuroda), already spend 5 million yen on antiques. Yuka’s brother, who works as a junior high school teacher, is nothing other than a creepy oddball – note how he avoids eye-contact.

Narra-note 2: The revelation that Asami is nothing but Yuka’s imagination further underlines the distance she has installed between her and the other. Asami acts in fact as the imagined obstacle that keeps the others at a distance as well as allowing her to evade the loneliness that marks her.

It is thus her disappearance that evokes Yuka’s will to open herself up to others.