While the name of Katsuhide Motoki might not ring any bells for many readers, he can already present a decent oeuvre. While most of these movies had only domestic appeal, Motoki’s latest, based on Jun Ikeido’s novel “Soratobu Taiya”, is one of his first to cross the ocean for an international screening at the Dutch Camera Japan festival.

Akamatsu doesn’t want to hear about any of this as he sees it his righteous duty to protect the eighty staff and their families of his company no matter what.

But then disaster happens. The front wheel of the Kensuku Yasutomo’s truck (Katsuya Maiguma) flies away and kills Taeko Yuki (Mitsuki Tanimura). The Kohoku Central police, led by Shinji Takahata (Yasufumi Terawaki), as well as the media blame bad maintenance as the cause for the incident. Hope Motors’ investigation corroborates this suspicion. But Akamatsu trusts his personnel and his technician Shunichi Kadota (Aran Abe) and believes the error lies elsewhere. To safe his company, no other option is available than to prove that what no one wants to believe.

Recall reveals – like so many other Japanese cinematographical narratives, the ‘societal’ preoccupation with the image and the effects such preoccupation effectuates. As Akamatsu transport is accused of faulty maintenance, no one, associated with the former company, wants to endanger their societal image – no one wants the public to question the ‘ethics’ of their company. 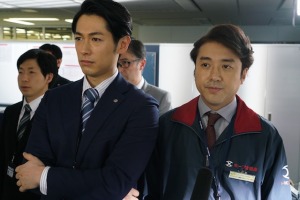 As such, Bank of Hope any money and Sagami Machinery, one of Akamatsu transport’s biggest client, ends their contract. In other words, track records and long-standing business relations evaporate in light of the importance of the (preservation) of the societal embedded image.

In light of the power of the image as embedded in the social ‘mediatized’ sphere, Akamatsu’s company is thus quickly in dire straights. Nevertheless, Akamatsu wants justice, justice that will safe his company and the families his company feeds. The fight that follows, the fight between Akamatsu and Hope Motors, a large corporate company that is hiding some secrets, forms the main narrative thread of Recall. But the narrative – and this constitutes the second important narrative line – also explores the hierarchical structure of the company through Yuta Sawada (Dean Fujioka), who works at the Sales department.

By following this character, the spectator quickly realizes that Hope Motors is not entirely unified in their attempt at self-preservation and hiding secrets. Moreover, as Yuta Sawada questions the integrity of the Quality Assurance and R&D branch of the company, the spectator is given an insight in how power relations and company politics are an instrument to protect, in any way possible, the profit of a company. In other words, Recall shows the worst side of capitalism, as protecting the profit – self-preservation – is shown as more important than any human or company whatsoever.

While Recall presents the usual narrative structure for these kind of narratives (e.g. Fight, setback, final fight), three interrelated aspects make this narrative achieve greatness. First of all, the fact that this David – two Davids to be precise, against one powerful but corrupt Goliath is set in the world of Japanese corporate life, that is framed in a very believable and realistic way (Narra-note 1).

The second aspect is the ability of the narrative to touch the spectator. As the spectator is touched – e.g. by the emotions of the widower – the narrative successfully generates support/sympathy for Akamatsu and for his righteous quest to bring Hope Motors to justice (Narra-note 2). In this way, the narrative – the question on how Hope Motors is going to be brought on their knees – is made even more compelling and, for that matter, the conclusion that much more satisfying.

The third aspect is found in Recall‘s cinematography – i.e. its use of shakiness. Shakiness is not only applied to evoke some tension and to underline the turmoil the incident causes, but, and this is by far the most important function, to emphasize – opening the space for identification – the subjective turmoil of Akamatsu – empowering the subjective importance of his company and his workers (Cine-note 1, Acting-note 1)

. This shakiness thus supports the ability of the narrative to touch the spectator and is, for a great part, responsible for the investment the spectator is able to make in Akamatsu’s quest.

To be complete, the applying of shakiness rests on a cinematographical framing that consists mostly out of concatenations of fixed shots, with, a regular intervals, a moving shot thrown into the mix (Colour-note 1). While most of these moving shots emphasize emotions or feel natural given the framed situation, some of these shots have no other contribution than to add cinematographical diversity.

While Recall does not break any new ground at the level of narrative structure – presenting a rather predictable structure, it is nevertheless a very compelling narrative. By cleverly using shakiness and infusing emotionality at the right times, Katsuhide Motoki opens up the necessary possibility for the spectator to engage satisfyingly with Akamatsu’s quest. In short, Recall is a fun, emotional and engaging narrative, but nothing more.

Cine-note 1: The fact that the shakiness evokes some of Akamatsu subjectivity as well is sensible in the communicative difference between fixed shots and shaky shots framing Akamatsu.

In shaky shots framing Akamatsu, we usually see a more vulnerable and emotional Akamatsu, while fixed shots frame an Akamatsu that is more sure of himself or is in the process of thinking up a plan. Nevertheless, sometimes it remains obscure why shakiness is added to a given shot.

Narra-note 1: To be complete, account manager Kazuaki Izaki (Issey Takahashi) of Bank of Hope – bank of Hope is part of the Hope conglomerate just like Hope Motors – is not willing to make it that easy for Hope Motors either – much against his higher-ups.

Narra-note 2: What is most effective in the speech of the widower is the fact that he directs it to the wrong person. The addressee of his emotional speech is, without his knowledge, to be directed to Hope Motors.

Acting-note 1: Tomoya Nagase who plays Akamatsu gives a great performance, making it even more easier or the spectator to engage with his quest.

Colour-Note 1: The narrative space is framed in Yellowish colours