Tomu Uchida (1898-1970) has remained, for some unknown reason, largely unknown in the west. For a director so versatile, so talented, and so socially engaged, it is only logical that he deserves more recognition for his cinematographic accomplishments. In order to introduce a wider audience to this unknown Japanese master of cinema – and to try to rectify the lack of international recognition, Arrow Video decided to release Uchida’s Bloody Spear at Mount Fuji on blu-ray.

Sakawa Kojūrō (Teruo Shimada), a samurai, is on his way to Edo with his servants Genta (Daisuke Katō) and Genpachi (Chiezō Kataoka), who also acts as spear-carrier. While travelling around Mount Fuji, they encounter various people with each their own problem, such as a police officer that is trying to catch a thief and a woman who is to be sold into prostitution. But Kojūrō, while kindly for the most part, becomes a changed man after some alcohol.

First things first, Bloody Spear at Mount Fuji is not your typical samurai narrative. In truth, as the narrative essentially concerns the travel of one samurai and his two servants, it is incorrect to call this narrative a story about samurai. It is – in more correct terms – a story of one travelling samurai within Edo-society. The narrative is thus not concerned with staging dilemma’s between human feeling (ninjo) and duty (giri), but with staging a slice of Edo society as such.

As a more generalized look at Edo-society, Bloody Spear at Mount Fuji provides a truly pleasant and engaging (codified) visualisation of Edo society, providing some truly interesting and remarkable moments, like how the open-air tea ceremony is conducted. Furthermore, this visualization also mixes the two subsequent pre-war Jidai-geki traditions into one pleasing whole. While the focus on various members of Edo-society and the representation of Kojūrō as a samurai with subjective problems – note his symbolic impotence – reveals the narrative’s humanist tendency, there is also a lingering flair of nihilism – already hinted by the English title as well as the Japanese title – that only comes to full bloom at the conclusion of the narrative

The pre-war humanist jidai-geki tendency is also sensible in the truly charming light-heartedness that characterizes most of the narrative. The main source for this light-heartedness is, unsurprisingly, to be found at the level of Sawaka’s servants. The heart-warming interactions of Genpachi with Genta, his fellow servant, and orphan Jiro (Motoharu Ueki) who aspires to become a spear carrier or samurai himself, are sure to put a smile on one’s face.

As most great samurai narratives do, Bloody Spear at Mount Fuji also questions and subverts the societal system of bushi and non-bushi as such.This questioning is present in the film’s comedic dimension, e.g. the open-air tea ceremony, as well as in the more nihilistic and dramatic dimension of the narrative. In other words, by showing the humanity of Sawaka in particular and by revealing the importance of a true heartfelt human relationships, Bloody Spear at Mount Fuji is able to become a critical reminder of the fictional dimension of such feudal constellation and the cruelty such patriarchal system can give rise to. While this critical reminder was very relevant at the time this narrative was released, it has not lost his relevance for contemporary Japanese society (Narra-note 1).

While fixed shots and moving shots are present, what is most peculiar and pleasing about Bloody Spear At Mount Fuji’s cinematography is its use of tracking shots. As movement is central to the narrative, the abundant use of tracking shots evokes the sense of travel as such. But – and here you see the creative vision of Uchida – the reverse is equally true: when our travelers rest for the night, the cinematography mirrors the diminishing of movement and turns into a more fixed composition – a fixed composition that opens up the possibility for the narrative to unfold itself (Cine-note 1). 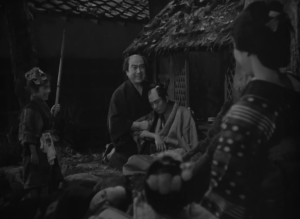 More than the consequent cinematography, it is the performances of the actors that turns this narrative into such a sensible societal critique and plea for heartfelt human relationships. While Teruo Shimada’s staging of Sawaka is great, it is Motoharu Ueki’s performance as Jiro and Chiezō Kataoka’s as Genpachi that truly steals the show.

Bloody Spear at Mount Fuji is, in short, an amazing narrative. Moreover, this light-hearted tale of a symbolically impotent samurai and his servants is also a sharp critique of Japanese societal functioning of the fifties – a critique that remains relevant for contemporary Japanese society. As one can, without a doubt, consider Bloody Spear at Mount Fuji a forgotten masterpiece by Tomu Uchida, we cannot but recommend every movie enthusiast to pick up Arrow Video’s latest Blu-ray release (Blu-ray Note 1).

Narra-note 1: The fictional dimension of the feudal system is questioned when the narrative questions  the problematic dimension of the master/senpai and servant/kouhai relationship – something that still persists up until today in contemporary Japanese society.

Cine-note 1: The fighting a mix of dance-like choreography – which was very common in Japanese cinema before 1924 – and realism.

Blu-ray Note 1: The audio commentary by Jasper Sharp is truly enlightening. As it provides the interesting information about Uchida’s life and career trajectory, the spectator is enabled to appreciate the Uchida’s Bloody Spear at Mount Fuji even more.