“Okada has not failed to compose a truly refreshing take on the fantasy genre.”

It is not common for us to review a Japanese anime narrative, but we’re glad to make an exception for Maquia, the debut anime-narrative of Mari Okada. The reason for this exception is simple, if your fiance urges you to review this anime narrative – as some say it is even better than Kimi no Nawa (2016) – then you have no other option. So, without further ado, we present our review of Maquia, When the Promised Flower Blooms (2018) (general-note 1).

Maquia (Manaka Iwami) is a being of an ancient race called the Lolph that live for hundreds of years, even though their appearance does not change that much. The Lolph live a rather secluded life far from the lands of man and fill their days, like they did for many centuries before, with weaving, weaving, and weaving Hibiol cloth. More than just cloth, the act of weaving is an act of speaking and expressing one’s emotions.

One day, the peaceful existence of the Lolph is disturbed when three armed Renato-dragons appear. The soldiers, led by division commander Isol (Tomokazu Sugita), have come for one thing: a female Lolph so that they can find their king can find they key to attaining immortality. Maquia is able to escape, but loses everyone she holds dear. And then she finds a baby and decided to adopt him. 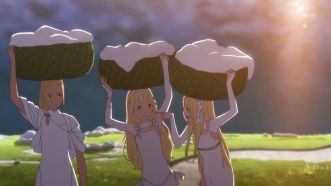 While the narrative of Maquia consists of various interlinked plots, the themes Okada wants to evoke are crystal clear – the various plots are obviously written in function of the themes Okada wants to convey (Narra-note 1). With Maquia, Okada aims to underline the inherent power of women, e.g. in the act of giving birth, and to highlight in melodramatic fashion the importance of a mother in a person’s coming-into-being – and the importance of the child in the never-ending ending changing subjectivity of the caretaker/mother. But Okada also underlines, albeit in a more subtle fashion, that one cannot settle in the function of a mother for eternity and that motherhood fundamentally implies a process of letting go, a process of allowing the child to become his own subject.

While the theme of motherhood is mainly explored in the development of the relationship between Maquia and Erial (Miyu Irino) – evoking many milestones of motherhood, the side-plot of Leilia (Ai Kayano) and her child empowers, by its contrasting nature, the very concept of motherhood Okada wants to convey (Narra-note 2). In Okada’s view, the fundamental dimensions of motherhood, when all is said and done, have nothing to do with something biological (Narra-note 3). Maquia evokes the rather radical idea that, even though a emotional bond is formed through being pregnant, every woman has to become a mother.

The art-style of Maquia is utterly beautiful, be it the way characters – courtesy of Akihiko Yoshida – are drawn or how the backgrounds are painted. The rather simple style that characterizes the drawing of characters is powerful as it allows every line to become expressive in the process of its animation. In other words, by using a drawing style that is simple, emotional expressions, and movement can be animated in such a way so that the potential of communicating emotions is optimally used.

And while one can already enjoy the movements and the expressions that the rather  simple drawing style allows, another joy is to be found in the beauty of the backgrounds. From the ethereal beauty of Lolph’s idyllic land – a land touched by the decline of the glory of the past – the impressive grandeur of Mesate’s capital, the rural villages, to the more dirty industrial city Dorel, what stands out is the superb attention to detail. And what truly makes the backgrounds shine and bring them alive is the very interaction between the fabulous colouring and the exquisite lighting – the subtle play of light and shadow. While the interplay between light and shadow is great throughout the narrative, there are some shots that become, because of this interplay, truly mesmerizing.

The animation of Maquia is great and even attains at some moments a level that we could call art. These moments are those moments where the animation of movement – the interplay of different moving elements – becomes a source of enjoyment itself. One such moment is when young Maquia runs away from an ill and thus uncontrollable Renato-dragon. These moments underline, that animation more than any live-action movie is able reveal how beautiful and how mesmerizing movement can be. The music, composed by Kenji Kawai, is fantastic. while the music has various purposes, what really stands out is the music’s ability to empower the emotions certain scenes wants to convey. The music plays a vital role in bringing the climax of the narrative to melodramatic heights.

While Maquia’s narrative is epic in scale – offering an abundance of mesmerizing imagery – its true beauty lies in the fact that it reveals the most intimate, the realization of the fundamental importance of a mother for one’s life and the radical act of giving life, as more epic than anything men can cause, e.g. deathly wars, in the world. Yes, Maquia might offer some good melodrama – so please beware – but Okada has not failed to compose a truly refreshing take on the fantasy genre.

General-note 1: While Maquia is a great narrative in its own right, it does not attain the technical perfection and the emotional power of Kimi no Nawa (2017). Yes, kimi no nawa would be an honoured movie.

Narra-note 1: Another theme that is present in the narrative is, in the case of the Lolph, the difficulty of accepting the fact that everyone ages and dies. The loneliness the elder talks about in the beginning of the narrative refers to the very loneliness caused by seeing, as a Lolph, everyone non-lolph that one hold dear die before you, while you live on.

Narra-note 2: While the fact that Maquia adopts the child so that he will not be alone in the world, the very act of adopting erases her own feeling of loneliness. So her initial motives for becoming a mother are selfish.

Narra-note 3: The difference between the symbolic position of the mother and the biological position of motherhood is sensible touched upon in Ariel’s struggle after realizing Maquia can’t be his biological mother.

The importance of forming an emotional bond with one’s child during pregnancy is underlined by leilia’s emotional struggle, a struggle caused by the fact she cannot see her daughter.

Psycho-note 1: It is funny and interesting to note that the position of the father is largely ignored in the narrative – one exception is to be found in Erial’s enunciation that he will become Maquia’s father. For some reason, this element reminds us of the fact that in almost all of Freud’s cases the position of the father was problematic. While we do not want to imply anything about Okada’s own family-context, the absence cannot but have a subjective relevance.