Last week, Adam Torel contacted me to ask if I could help a friend of him. This friend, her name is Hikari, is currently in the process of filming her first feature film and needed extras for the shooting day in Tokyo. I accepted the invitation, even though I could not be present for the entire shooting schedule. 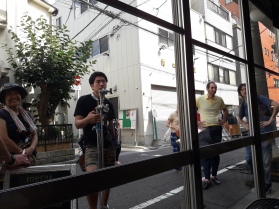 Before I share my impressions of the inner workings of a film-set and my experience as an extra, I do want to provide some information on the movie itself. Information that I – I have to confess – did not really knew at the time of shooting.

I might have used the signifier of composition in some of my reviews, but this signifier regained a richer meaning/signified through my experience as an extra. 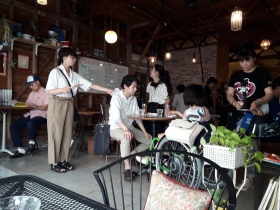 In the picture, one can see my final position on the set, but my initial position was on the other side of the room – and I had another position before being seated at the window. Another difference, for example, to the initial set-up are the positions of both characters, which were initially the other way around. What is logically hidden behind the surface of the film, is the act of composing the narrative space. Even though I knew this truth already, to see the act of composing unfolding on the set itself, was truly impressive.

The importance of sound and the annoyance of the heat

As composition is of fundamental important to the establishing of a narrative space, it shouldn’t surprise us that sound is composed as well. There were two sound-recordings. First we had the recording of the conversation between our two characters – I’m not going to spoil anything, but it sounded romantic. This, of-course, necessitated all the extra’s to enjoy their drinks in silence. This also meant that the air-conditioning had to be turned off. 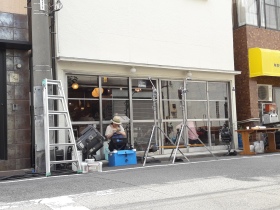 The latter logically caused the room to attain the out-side temperature, which was more than 30 degrees. While I suffered because of the heat, I also felt a certain fulfillment.

Of course, a cafe without the usual murmuring noise of people speaking is a bit strange. So after the shooting of the important scenes were finished – and after shooting a short shot of Adam Torel, me, and two Japanese people drinking – the extra’s were invited to simulate a living breathing cafe. We were grouped in three groups, one seated left, one in the middle and one on the right. At first we were all talking naturally, but then a member of the staff began, as a conducter, to regulate the noise level. The left group had to speak loud, the others had to be more silent. Then the middle group needed to raise their voices while the others remained more quiet. And then our group could talk loud again. The conductor repeated this process, seemingly in random order, a few times, before ending the shooting day all together.

Even though this was only a short experience as an extra, it showed, or better re-revealed the beauty of cinema to me. While the experience of watching is already enjoyable, being part of the process of composing narrative spaces and to stage the narrative as such – the place where the deception takes place and illusions are created – is truly enjoyable. Moreover, I allowed me to meet some truly interesting people, including Hikari, the director of this truly interesting narrative.

For those who want to keep following news about this movie, be sure to check this movie’s twitter and facebook page.