While winning an award with one’s feature debut is an amazing experience not many directors are able to re-affirm their talent with their second-feature film. Can Natsuki Nakagawa, who won the Skip-Award with her graduation film, She Is Alone (2018), at the Skip City D-Cinema International Film Festival 2018, escape this ‘fate’ and re-affirm her talent with her follow-up, Beyond The Night?

One night, Mikiro Toyama (Kenta Yamagishi), wandering in the forest, observes how Sotoko (Saki Tanaka) tries but fails to escape her abusive husband Atsuya Hashida (Yasuhiro Isobe). Some days later, he sees Sotoko slowly walking into a river. He – obviously thinking she is about to commit suicide – runs over to her and pulls her out of the river. Mikiro offers his help, but Sotoko refuses. But Mikiro, in love with Sotoko, will not stop until he saved her from her husband. 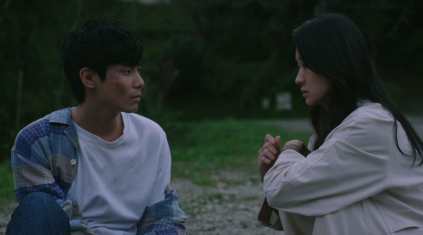 Nakagawa’s Beyond The Night offers a detailed exploration of the complexity of toxic marital relations. She reveals – to get straight to the point – the codependent nature of such relations and shows how the cycle of abuse is, in some cases, actively supported by both parties.

At the beginning of the narrative, the spectator feels that Atsuya completely controls Sotoko’s life. He controls, to put it more poetically, the rhythm of her life. His obsessive control, a control seemingly erasing her subjectivity, is to make sure she does not undermine his investment in and preoccupation with (having) the phallus for her. Whenever Sotoko attempts to escape his control, escape the ‘laws’ she is subjected to, the laws supporting his fantasy of having the phallus, she confronts her husband with the male fragility that marks him. 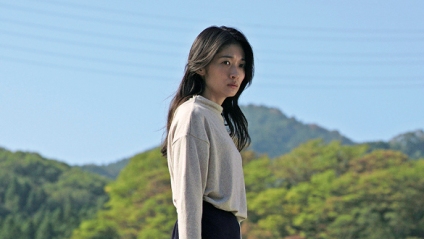 Atsuya needs Sotoko because it is only in relation to her that he is able to sustain his fantasy of having the unattainable phallus. The abuse she endures has no other aim than to force Sotoko to play her role, the role of ‘ideal-wife’, within his phallic fantasy. That the abuse continues – that Sotoko needs to be abused over and over again – does not only underline how crucial Sotoko as woman is for Atsuya’s male fantasy, but also implies that something, i.e. Sotoko’s female jouissance, remains ‘outside’ his control.

Sotoko‘ｓattempts to escape her husband are – it has to be said – only half-assed attempts. She is not able or does not want to escape. These attempts, by virtue of being failures, show how complex the abusive marital situation is and how entangled Sotoko is in the fantastic pre-occupation of her controlling husband. She needs to fail her escape – she needs to be found by him – so that she can confront him with his phallic insufficiency while ensuring herself that he loves her (Narra-note 1, Narra-note 2). Sotoko’s failed escape attempts are thus not only a way to defy his phallic fantasy, but also a way to ask him if he truly loves her.

Sotoko’s refusal of Mikiro’s offer to help her further underlines this marital complexity. With her refusal, she does not only deny the situation of being abused, but also tries to play her role of ‘ideal wife’ as demanded by Atsuya. That Sotoko eventually turns to Atsuya for help is because the co-dependence that underpins the marital situation renders her unable to perform any radical subjective act (Narra-note 3). She needs, in other words, a third party to break the relational cycle she is stuck in. But will that be enough to go ‘beyond’ the night and leave her hometown (Narra-note 4)?

Nakagawa’s visual composition – a mix between static shots and ‘floating’ dynamic shots – offers a pleasing natural fluidity and a slow-paced enticing rhythm. Her composition is visually powerful, but this is not due to her shot-compositions – even though there are some truly impressive shots – or her scene-compositions, but due to her use of a realistic lightning design.

Nakagawa utilizes musical accompaniment to great effect to infuse tension into her narrative. But the infusion of tension is not only function of her thoughtful application of music, but also of the slow-paced nature of her visual composition and the natural lightning design. It is, in fact, the flawless interplay between these three elements that allows the tension – the tension of the relational triangle – to linger throughout the narrative and to become more sensible over time (Narra-note 5).

Beyond The Night is an extra-ordinary narrative by Natsuki Nakagawa. With great clarity and clear precision, she unfolds the very complexity of toxic relations and uncovers how a male and a female subject actively partake in a cycle of abuse dictated by a phallic fantasy. Nakagawa, furthermore, confronts us with the very opaqueness of female enjoyment and desire – what does she desire? No one knows, not even her. With her exquisite narrative, Nakagawa, in short, reaffirms herself as one of the most promising female directors in Japan at the moment.

Narra-note 1: Sotoko does not only try to show her husband his phallic insufficiency by attempting to escape, but also by speaking about ‘going to another guy’. While the former aims to defy his male authority in a direct way, the latter aims, in a more titillating way, to show him that his real phallus does not suffice.

Narra-note 2: We should not forget to underline that Atsuya also entices Sotoko to undermine his phallic fantasy. What he, in fact, attempts in a rather twisted way is to assert his phallic superiority with respect to the ‘imaginary’ men vying for his wife.

Narra-note 3: Her cry for help only comes after suffering a devastating imaginary injury concerning motherhood. This implies – even though we never receive any confirmation, that her true desire and enjoyment circles around the notion of motherhood.

Narra-note 4: The way we have written about Nakagawa’s narrative implies that Sotoko is a passive object subjected to the violence of her husband, but that could not be further away from the truth.

But, as the Nakagawa’s finale implies, Sotoko plays with the fantasies of men without knowing her own subjective desire and source of her female enjoyment. The ease by which she enters, as woman, the fantasy of the male subjects (Atsuya and Mikiro) ultimately hides Sotoko’s failure to understand herself as subject.