In 2012, Keiko Tsuruoka surprised audiences by winning the Grand Prize at the 2012 PIA Film Festival with her graduation work, The Town of Whales (2012). This success that also ensured her work to be screened at many international film festivals. For her fourth feature film, she presents her adaptation of Kanako Nishi’s novel Makuko.

One day, just as he arrives home, a mysterious girl calls out to 11-year-old Satoshi (Hikaru Yamazaki). She expresses her interest in him by asking him rather peculiar questions. Highly uncomfortable by this sudden female attention, Satoshi’s suddenly ears turn red. The girl, obviously mesmerized by this colourful phenomenon, points it out to him. Satoshi runs away embarrassed.

The next day, at school, Satoshi learns that the mysterious girl is called Kozue (Ninon) and that she and her mother, who was hired by his family, his mother (Risa Sudou) and father (Tsuyoshi Kusanagi), to work at the inn, will also be living at the employee dorm of the Akatsukikan inn. Eventually, she confesses to him that she is an alien who has come to earth to research the meaning of death so that can save her home planet.

The central theme of the narrative of Makuko concerns the fear of growing up, the fear of entering the complicated and contradictory world of adults. If Satoshi fears growing up it is because of the conflict he perceives between his grandmother’s words, his father’s actions, and his own bodily changes.

On the one side, his grandmother underlines that his growing consciousness of the Other and how this Other might see him functions a sign of him growing up. In Satoshi’s case, his consciousness of the Other, a consciousness of himself in respect to the eye of the Other, starts when he feels embarrassed for having joined in the past Dono (Jun Murakami) reading the latest manga at the school gate. On the other, he is confronted with his philandering father, a father who does not care one inch about how the Other/others might see him. Within the Other, structured by the societal ideals supported by the others part of said Other, Satoshi’s father philanders without letting the eye of the Other curtail his desires.

Satoshi is conflicted because even though he wants, not unlike his dad, to keep on doing what he likes to do without having to consider the eye of the Other, the birth of the consciousness of this eye in his subjective experience reveals the familial and romantic mess that the insensitive conduct of his father has created. Satoshi’s wish to not grow-up is, in our view, not only caused by his fear of becoming like his father, but also because he wants to evade the conflict between personal desires and (often oppressive) social ideals that marks the adult life and one’s realization as an adult subject. 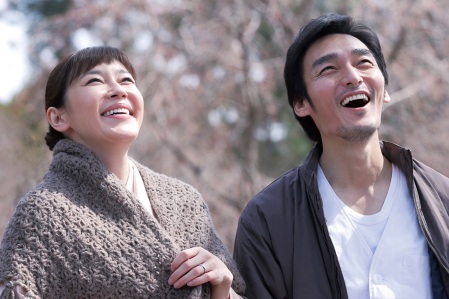 Kozue, although in a different way than Satoshi’s father, is not subjected to the eye of the Other either. She is – and this is beautifully shown in the narrative – not conscious of how her presence as such and her direct acts are perceived by others, e.g. her classmates, the people at the inn. Kozue is odd, she does not fit will within the societal fabric, but she is not conscious of this oddness as such (Narra-note 1).

Satoshi, for that matter, is troubled by his blooming consciousness of the Other. His embarrassment in relation to Kozue is, thus, not only instigated by her un-Japanese straightforwardness and her genuine interest in him, but also caused by the self-consciousness her fascination and his romantic interest in her engenders. It is, in a certain way, the perceived weight of the (eye of the) Other that makes Satoshi so shy about his blossoming sexuality.

The issue Makuko explores how Satoshi can overcome his fear of growing up and accepts his blossoming sexuality. Important for the answer Tsuruoka formulates at the very end of her bittersweet narrative are the contrast between eternity and impermanence, the cyclicity in nature between death and rebirth, and the link between sexuality and death. That said, the more fantastical sequence in the finale of the narrative felt unnecessary, not only due to the unconvincing visualization, but also because bathes in a misplaced sentimentality. Without this sequence, the narrative would have been so much better. 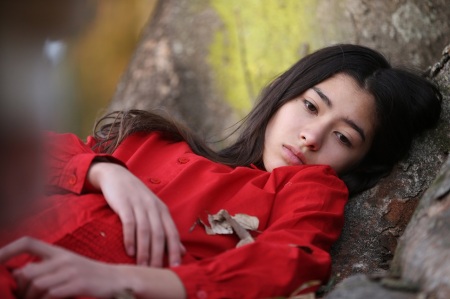 The cinematographical composition of Makuko offers a balanced mix between static moments and moving moments. It is, furthermore, immediately apparent from the overall composition that, notwithstanding some obvious exceptions, all shots/compositions circle around one character: Satoshi (Cine-note 1). This cinematographical emphasis – fixed moment often emphasizing his facial expressions, moving shots generally following his movement within the narrative space – establishes Satoshi as the main character and reveals him as the center around which the narrative turns.

The opening as well as the ending of the narrative of Makuko features a narrating voice, the voice of Satoshi. The use of a narrating voice corroborates the fact that Satoshi is the main character by putting his subjective perspective at the auditive level on the forefront. While the narrative voice is only used once at the beginning, this use does reveal what Makuko is all about, the staging of the subjective perspective of Satoshi, a fifth grader at elementary school. This is also apparent in the cinematographical composition as such. Slow-motion, for instance, is applied whenever Kozue’s mysterious beauty touches/mesmerizes Satoshi. 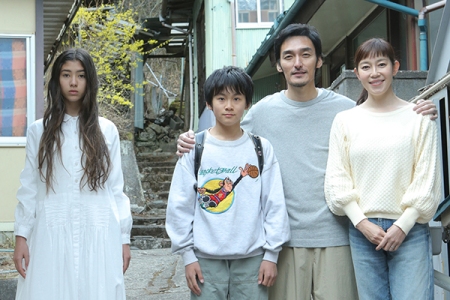 Makuko is a bittersweet coming-of-age narrative. While the fantastical sequence feels out of place and infuses a sentimentality the narrative did not need, this misstep does not stop Keiko Tsuruoka’s narrative from offering a pleasing exploration of the fear of becoming an sexually desiring adult and rightly stating that life can only attain its beauty by its very ephemerality, that life can only attain its beauty because we, as human beings, are sexed beings.

Narra-note 1: That Kozue is not conscious of how others see her is beautifully evoked in the scene where all fifth graders need to craft a 3D self-portrait in class. Rather than making something that corresponds with how she would see herself in the mirror or how other would see her, she makes something that, in her current form, bears no resemblance to her.

Cine-note 1: The emphasis on Satoshi’s emotions is also apparent when he meets Kozue for the first time. His uneasiness is echoed by the shakiness of the frame.