Shun (Koji Moriya), Tomoki (Haya Nakazaki), Kazuya (Yusaku Mori), and Eita (Shugo Nagashima), who have been friends since their childhood, all work at the same construction company, a company run by Kazuya’s family. They lead a rather carefree life, until Kazuya’s uncle, their former teacher, is found dead. His death does not only lead to the discovery that he had a young widow but also to the subtle change in the dynamics between our friends. 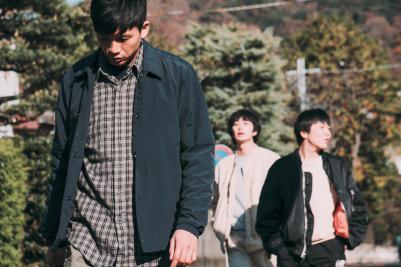 The Murders of Oiso is not, as the title may imply, a murder-narrative in the strict sense. First and foremost, it is a narrative exploring the subtle effects the passing of someone has. Put in this way, Misawa’s narrative explores how the death of someone alters the social structure – i.e. the structure created by the relation each subject, and the (destructive) effects this alteration slowly sorts.

Even before the death of their former teacher, spectators will notice that interactions between our friends are not devoid of any underlying conflict – see for instance the interactions between Katsuya and Eita. In truth, these tensions or little conflicts are caused by the specific hierarchal dynamic between our young men. Kazuya, obviously the leader, exerts a subtle power over the others, his followers, because he made sure that his friends got a job at his family’s construction company. Shun, Tomoki, and Eita have, in other words, a symbolic debt, a debt that makes it difficult to change or truly disturb the nonreciprocal dynamic between them (Narra-note 1). Keeping this in mind, one could even argue that their friendship has, at least, already been corrupt to a certain level (Narra-note 2). 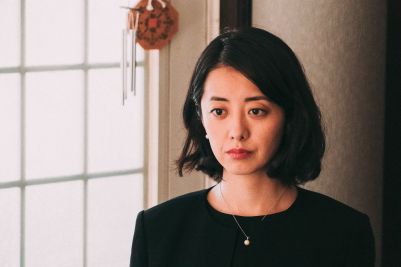 The death of Mr. Ito is, in this sense, nothing other than a subtle catalyst, a catalyst that intensifies points of conflicts, points of conflict that were, while suppressed, already present before his passing. For our friends, Mr. Ito appeared to be an external point that kept our young men, at least at the surface, unified. His passing thus allows their corrupted but intimate union to slowly deteriorate. This does not only evident in Shun’s interest in Mr. Ito’s young widow, but also in, without spoiling too much, Kazuya’s perverse act.

What makes Murders of Oiso so engaging is the evocative narrative structure. While Misawa’s narrative can, by no means, be called experimental, his inclusion of visual moments that the spectator, given the unfolding of the narrative, cannot fully place/understand generates mystery and tension and subtly engenders a desire to know. It is only after a while, due to visual association and visual repetition, that the spectator can give the evocative visual moments its meaning within the narrative’s unfolding and allows the narrative as a whole to become touching. 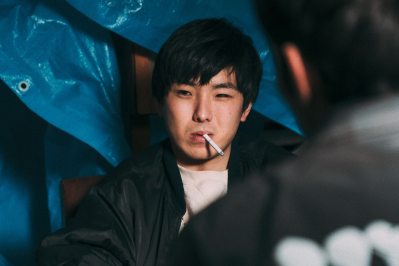 The cinematography of Murder of Oiso retains, despite its initial reliance on static shots, a pleasant feel of dynamism due to its inclusion of cinematographical movement and use of techniques like slow-motion. But this pleasant dynamism – i.e. the way shots are concatenated – is not the only thing that is pleasing about the cinematography. Another pleasing element concerns the composition of the shots as such. By paying attention to geometry, Takuya Misawa and Lui Timlui, the cinematographer, give the framing of the mundane a subtle artistic dimension. The shot compositions would, nevertheless, not be so visually pleasing were it not for the natural lighting design. It might be subtle, but the way lightning is approached in this narrative truly helps the composition of the shots – and, for that matter, the shots of nature – shine.

Musical accompaniment is used sparingly, but when it is applied the stylish musical pieces by Iwamoto Eiji always succeed in elevating the cinematographical composition. Sounds are used in a thoughtful way. Not only in the opening sequence of the narrative but also at other points in the narrative, dull tensive sounds warn the spectator of the yet to be revealed relational ‘darkness’. The subtle suspicious atmosphere, as generated by the sound-design, points to the fact that the truth of the murders will have to be situated in the relations between our four young guys. 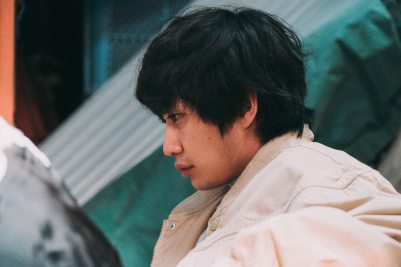 With Murders of Oiso, Misawa Takuya delivers a smartly structured narrative that exploits the evocative dimension of cinematic medium. This is not a narrative that spells out everything in a conventional way, but uses visual elements, such as visual association and visual repetition, to force the spectator to construct the various ways in which Mr. Ito’s death disturbs the relational and social dynamics of our four friends. Highly original and touching to boot, we highly recommend Misawa Takuya’s second feature Murders of Oiso for anyone who loves cinema.

Narra-note 1: Our four guys share, as is later revealed, a secret. This secret, a secret that needs to remain a secret from the company, binds them together as accomplices. This forms another reason for why it is difficult the escape the group dynamic as such.