Within the genre of live-action adaptations, it does not happen often that live-action adaptations receive sequels. While various reasons may be in play in these decisions to produce sequels, no one will deny that the potential of financial gain is ever the prime motivator. As the performance of Tokyo Ghoul pleased Shochiku, it was only a matter of time that a sequel would be made (General-note 1).

One day, Toka Kirishima (Maika Yamamoto) and Minami Fueguchi (Hiyori Sakurada) are watching a talk-show about the recent murder of popular model Margaret (Maggy). The commentator remarks that the peculiarity of this case, i.e. the fact that only her eyes were consummated, reveals the perpetrator as being a ghoul called ‘The gourmet’.

Not that much later, a guy named Shu Tsukiyama (Shota Matsuda) visits Anteiku café, the cafe where Ken Kaneki (Masataka Kubota) has found shelter. Unbeknownst to Kaneki, his half-human aroma makes Tsukiyama, ‘The gourmet’, obsessed with him. 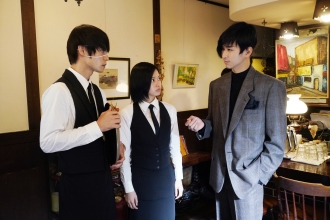 The main narrative thread of Tokyo Ghoul S concerns ‘The Gourmet’ and his culinary interest in Kaneki. As the villain is so central to the story, the pleasure of this narrative is largely function of the way the villain is framed. In this respect, the narrative starts of well. Directors Kazukiho Hiramaki and Takuya Kawasaki beautifully establish the refined ‘gourmet’ as a threatening ghoul that enjoys eating humans beyond a need for nutrition. While this strongly resembles our own human behaviour of seeking some enjoyment in the act of eating – i.e. the satisfaction of our oral drive, there is one fundamental difference that effectively reveals him as evil: the violent assertion of his right to enjoy the body of the other in an oral way. This violent assertion goes, as expected, hand in hand with a reduction of a subject to but a mere edible object/delicacy to satisfy his refined oral desire. Every aspect of Tsukiyama’s refined behaviour communicates his oral-erotic fixation on culinary pleasure. His obsession with Kaneki is, in this respect, nothing more than extension of his search for exquisite oral enjoyment, a search for culinary plus-de-jouir.

While it might seem strange and hard to believe for some spectators that Kaneki, as naïve as he is, remains blind to the seductive dimension of Tsukiyama’s behaviour, this is, when all is said and done, not the aspect that unbalances the level of tension in the narrative’s unfolding. What unbalances the tension and, in the same movement, problematizes the treat Tsukiyama poses, is nothing more than the failure to make the tension linger through the narrative’s development.

Certain aspects in Tokyo Ghoul S are but mere continuations of the narrative threads that started in Tokyo Ghoul. One such element concerns Kaneki’s training-relationship with Toka Kirishima, who is, despite what her innocent looks might imply, a dangerously talented martial artist. Another element that finds its continuation in Tokyo Ghoul S is Kaneki’s continued struggle as half-ghoul. While he succeeded to embrace some part of his reality as half-ghoul – as was framed in Tokyo Ghoul – his human part continues to be in conflict with his ghoulish side (Narra-note 1). This conflict is sensibly underlined by his reluctance to use his Kagune and his shyness concerning his ghoulish healing powers. Kaneki has, in other words, not yet found a way – we doubt he ever will – to truly accept his reality as half-ghoul.

Tokyo Ghoul S also touches upon the problematic given for ghouls to integrate in human society. While it is not so much the act of integration that is difficult (i.e. pretending to be human), the forming of bonds with humans remains problematic due to the fact that human flesh, when all is said and done, forms the sole nutrition for the ghouls. While this theme is already made present earlier in the narrative through the evocation of Toka’s subjective struggle, this theme is only put on the forefront by the framing of the ‘interspecies’ relationship between Nishiki Nishio (Shunya Shiraishi) and Kimi Nishino (Mai Kiryu). Beyond using this narrative thread to add melodrama into the mix, this romantic co-existence forms, at a thematical level, a stark contrast with the objectifying way the ghoulish predators, most notably Tsukiyama, lust for human delicacies. This contrast, this contrast between love and lust, eventually becomes the main narrative device to evoke the main structuring theme of Tokyo Ghoul S: the worth that each life has.

The cinematography Of Tokyo Ghoul S is characterized by a certain level of fluidity. This fluidity does not only point to the fact that the narrative is framed with a lot of camera movement – be it following or spatial, but also to the fact that the concatenation of shots has a natural fluid flow (Cine-note 2). Another aspect that defines the framing of Tokyo Ghoul S concerns the subtle tremble that often comes to define the framing. It is not difficult to see that much of the tension generated in the narrative is function of these two aspects (Cine-note 2). Both aspects work hand in hand in creating a frame that is able to communicates tension (Cine-note 3/Music-note 1). But while tensive moments are present, the directors duo sadly do not succeed in making this tension linger throughout the narrative, a failure that makes the threatening quality of the main villain inconsistent.

Cinematographical movement and trembling frame are also applied to frame the various action-sequences of the narrative (Cine-note 4). While the action-choreography is not extravagant in nature, the directors duo do succeed, by their thoughtful cinematographical underlining of various moments within the choreography, in turning each action-composition into a satisfying experience (Cine-note 5). While the narrative could have used more such pleasing action-sequences, spectators will not be disappointed by the exquisite finale, i.e. the final showdown with Tsukiyama. 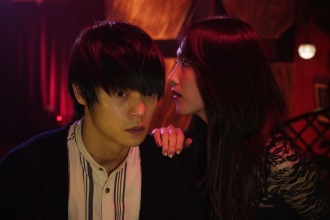 Just like its predecessor, the overall horror atmosphere of Tokyo Ghoul S is dictated by a certain level of darkness and a subdued colour-palette. While darkness in movies can often lead to difficulties in discerning the elements of a shot, the thoughtful lightning and colour design of Tokyo Ghoul S – a design which creates a rich nuanced palette of subdued colours and shadows – ensures that every important element within the shot remains discernible. The dimension of horror is further underlined by the inclusion of blood and moments of gore. It is precisely in these cases, these cases focusing on blood or gore, that one will find moments of fixity (Cine-note 5).

The CGI that brings the predatory organ (Kagune) of the Ghouls alive is, just like in Tokyo Ghoul, of a decent quality. While the integration of the CGI in the frame obviously benefits from the darkness that marks the various narrative spaces, the believability of the physical presence of the Kagune is supported by its animation and by the way that the sound-design gives the Kagune a presence within the narrative space. It is therefore not surprising that the most visually impressive and most moving moment of the narrative – a moment within the satisfying final showdown – features the Kagune (Narra-note 2/Music Note 2). 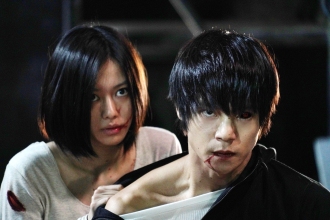 Even though the narrative’s structure has problems keeping the threat Kagiyama poses sensible throughout the entire narrative, Shota Matsuda’s portrayal is effective when it counts: the finale. Shota Matsuda’s dramatic portrayal might sometimes border on the caricatural, he does not fail to bring his orally fixated villain in a pleasing and engaging way to the fore.

While Tokyo Ghoul S would have been better if the directors had succeeded in underpinning the narrative’s unfolding with a lingering tension, a tension evoking the looming threat of ‘the gourmet’, one cannot conclude that this sequel is a failure. Tokyo Ghoul S might struggle with its atmospherics in its middle part, its beginning and finale do not fail to deliver the right ingredients to turn this narrative into a satisfying visual experience. So, all things considered, Tokyo Ghoul S succeeds as a sequel.

General-note 1: While the movie can be enjoyed without having read the manga or anime, we do feel that it might be easier for people that have read the manga/anime to place some narrative elements.

Narra-note 1: While the partial acceptance of his reality allows him to take his training seriously, one should not fail to discern that his motivation is fueled by his humanity.

Narra-note 2: The moment in question comes at the end of Toka’s first confrontation with Tsukiyama.

Cine-note 1: The inclusion of fixed shots fits perfectly within the fluid character of the cinematography.

Cine-note 2: We should add that in more tensive scenes camera movement becomes more jerkier in order to aid the communication of tension.

Cine-note 3: More ordinary techniques to heighten the tension are used as well.

Cine-note 3: Other elements of flourish, like slow-motion, are also used in the framing of the action.

Cine-note 4: The use of fixed shots is not only limited to underlining of elements of horror. One of the other functions is the establishing of the narrative space by way of fixed establishing shots.

Cine-note 5: This underlining is, in most cases, accomplished by using slow-motion.

Music-note 2: The impact of this moment benefits a lot from the accompanying dramatic music.