While Masatoshi kurakata is a rather unknown director – something that will remain as such in the near future, Neko Atsume House’s screenwriter Yuji Nakamori is, without a doubt, the most unknown screenwriter of popular Japanese cinematographical cat-narratives (e.g. Neko Ninja (2017), Neko Samurai (2014), Neko samurai 2: a tropical adventure, Chat Noir Lucy (2012)). With this narrative, he translates the wildly popular game of the same name to the silver screen.Review

One day, our socially awkward writer Sakumoto Kiyoshi (Atsushi Ito) hears about his chief editor’s proposal to turn his main character into a zombie, as to make his story more appealing. Sakumoto is not convinced,

but his chief editor (Tomorowo Taguchi) does not take a no for an answer. Before Sakumoto is able to raise his concerns, the editor ends the meeting, underlining that the deadline for his story is next Monday.

Towada (Shiori Kutsuna), another one of his editors, actually confesses that she doesn’t like the zombie idea, but underlines that Sakumoto’s novel, as it is, is utterly boring. Sakumoto, lost in life, decide to refresh himself by moving to the countryside.

Even though Neko Atsume House is, on the surface, a lighthearted comedy about a writer trying to overcome his writer’s block by re-inventing himself, the narrative also constitutes a heartwarming search on how one can position oneself in relation to a cat. In this respect, the narrative frames – through the interactions between Sakumoto and the somewhat eccentric but seductive cat-shop owner Yoko (Tae Kimura) 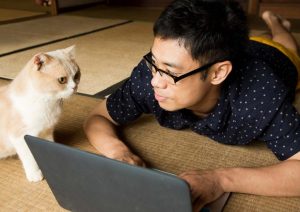 – the coming-into-being as cat-owner that every cat-owner goes through and the necessary road to follow in order to learn the cat’s personality, e.g. his likes and dislikes (Narra-note 1).

It will not surprise anyone that, as a narrative, Neko Atsume House lacks psychological depth, but it surprisingly offers a heartwarming, tender and recognizable account of the relationship between a human subject and cat. The narrative succeeds in framing, in a very lighthearted but touching way, various moments that are extremely recognizable for cat-owners. It is only through the framing of Sakumoto’s bond with cats that the true purpose of the narrative becomes apparent, i.e. offering, for the spectator, a celebration of the healing function cats have for the human psyche. This narrative allows any cat-lover to be brought back into contact with the very power residing in the very special bond between a cat and a human.

For a rather simple story about collecting cats, Neko Atsume House does boasts interesting and even some slightly unconventional cinematographical moments (Music-note 1).

Especially the cinematographical choices in the beginning of the narrative reveal a thoughtful use of the power of the camera. The interesting shot-compositions – those revealing his way of life – and the slightly claustrophobic focus on Sakumoto’s face and facial expressions have no other purpose than to highlight the very stress Sakumoto suffer from. And while no special cinematographical techniques are used to frame the cats, apart from the occasional play with depth of field and slow-motion, the director succeeds in letting the cats show their inherent beauty and majestic glory in the frame.

While Neko Atsume House will not win any prizes for its narrative complexity or its psychological depth, the narrative does succeeds in providing an honest but lighthearted framing of the bond between subject and cat(s). Highly recognizable for cat-lovers, screenwriter Nakamori has, with Neko Atsume House, created his most pure celebration of the very positive function cats can have in a subject’s life.

Narra-note 1: One should not read the narrative’s ending as a rediscovering, but as discovering that enables Sakumoto to re-invent himself. In other words, by being confronted with the signifier ‘cat’ in his first novel, he is able to become a new writer.

Music-note 1: The music supporting the framing of the narrative is playful and bittersweet in nature