While Kiyoshi Kurosawa might be known for recent narratives likes Creepy (2016) and Before We Vanish (2017), his first international acclaim came 12 years ago with the release of his horror-crime thriller Cure. As this narrative and the various other horror narratives he created in the following years, cemented him as one of the creative forces reviving Japanese horror, it is only natural we delve into the narratives that make up the beginning of Kurosawa’s oeuvre.

One day, detective Kenichi Takabe (Koji Yakusho) is asked to investigate the murder of a prostitute. At the crime scene, an identity card bearing the name Kuwano (Yukijirō Hotaru) is found. Not that much later, a 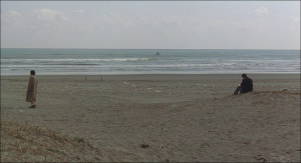 naked and distraught Kuwano is found hiding in a small closed-off space.

While the excess of violence and the rationality of the murderer is mysterious as such, what baffles Takabe the most is the fact that, without any leak of communication, two similar murders, both with different murderers, have already happened. Together with Sakuma (Tsuyoshi Ujiki), a psychologist, he tries to make sense of these murders. After the fourth murder, the murder of Tomoko by her busband Hanaoka (Masahiro Toda), a mysterious man called Mamiya (Masato Hagiwara) comes into focus.

As a slow psychological narrative, Cure could have been easily a boring affair, but, due to Kurosawa’s artistry, Cure has become an elaborate, psychologically deep and subtle tensive experience. The main element that makes the narrative structure of Cure so enjoyable is its reluctance to answer the mysteries in a direct way and the insistence, despite the elliptic way by unfolding the answer to the mystery, to keep things vague. 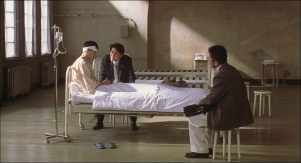 This vagueness is first of all evoked visually, as the narrative space is full of strange and often truly visually mesmerizing elements (e.g. Mamiya as presence, the murders, shots of water flowing,  …etc.). While these elements are not strange as such, their repeated occurrence subtly ripples the normality of the narrative space. In other words, these occurrences unearth the unfamiliar in the familiar – and it is the persistence of the unable-to-be-explained unfamiliar that turns the narrative into a mysterious and rather unsettling experience.

Concerning the murders as strange elements, it is their thoughtful framing that is instrumental in turning the murders into occurrences rippling the familiar and evoking the mystery of their meaning and their cause. The first murder, for example, is framed in a fait-divers way – the rather rapid concatenation of shots explicitly avoiding giving meaning/motive and importance to the act (Cine-note 1). The subsequent emphasis on the excess of violence as such, further underlines the mystery that surrounds the motive. The second murder, for that matter, evokes the psychological 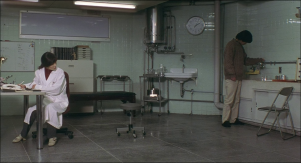 and traumatic effects of the act of murdering (i.e. suicide) rather than showing the murder happening as such. This shift in framing further emphasizes the mystery of motive – a mystery made explicit by the subsequent questioning of Hanaoka.

It is, by way of this thoughtful narrative unfolding, that the first thematic element of Cure is able to be evoked: the beyond-meaning of violence and the senselessness of the violent excess. In this respect, the narrative also shortly frames the traumatic impact of realizing one has murdered someone. While Kurosawa is able to highlight the beyond-sense of violence and evoke the impact of the real of violence in a refreshing way, the centrality of Kenishi Takabe’s detective work of course means that an explanation for the seemingly unexplainable string of murders is going to formulated. But in the process of unfolding the answer – an answer that concerns mesmerism, the narrative does not fail to evoke another beyond: the beyond-the-conscious. By subtly evoking repressed desires, enjoyment and/or thoughts, the narrative eventually reveals the structural possibility for each subject to become a violator. 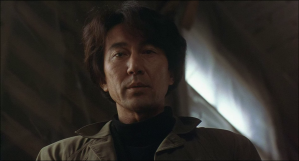 Horror is, first and foremost, that what a subject is capable off. The evoking of the truth of this beyond, an evoking without any compromise is, in our view, the narrative’s greatest power (Narra-note 1).

The narrative of Cure is framed by a thoughtful mix of temporally long fixed shots, subtle moving shots, and slow dynamic moving shots – these dynamic shots, besides being temporally long, quite often combine following movement as well as spatial movement. Besides the various visually mesmerizing shots mentioned above, various shots are characterized by a pleasing geometry – shots that emphasize certain interactions by creating a frame within a frame or shots that allow, by using movement within the shots, various visual elements to be underlined at the same time (Cine-note 2; Cine-note 3). While close-up shots are present in the narrative mix, the camera tends to remain distant – distant from the characters as well as distant from the violence as such.

The almost clinical cinematographical distance used to frame the narrative, infuses the narrative spaces – some which are rather empty – with a chilly, depressing atmosphere. As we glide from one narrative space into another, one easily feels that something is disturbs the social plane, i.e. the aspect of non-understanding and the dimension of the non-speaking between subjects. The question if people truly speak to each other while communicating with each other subtly resounds throughout the narrative (Narra-note 2).

Another strength to be found at the level of the cinematography is the framing of the ripple in Takabe’s mental state. The insertion of ‘subjective-mental’ shots within the rather objective concatenation of shots may be disorienting, but it is only by way of this disorientation that the problematic dimension of Takabe’s mental state is successfully communicated (Cine-Note 4).

Cure is a truly magnificent horror-mystery detective-narrative. This is not only because of the thoughtful narrative structure that thrives on a rather disconcerting vagueness, but also due to the successful way Kurosawa weaves psychology into the cinematography and the core of the narrative. As we travel through the atmospheric but desolate narratives spaces, the true message of Cure comes to pulsate sensibly. The pulsating revelation that every subject hides a destructive drive and violent desire is the true scandal of the narrative.

Cine-Note 1: The fait-divers effect is created by the contrast between the lighthearted music accompanying the framing of the murder and the grim reality of the act of murdering as such.

Cine-note 2: The creation of a frame within a frame is most often realized by using furniture or doors.

Narra-note 1:  The final shot, which is visually powerful, only further emphasizes the enduring presence of a destructive repressed desire (and jouissance) within the subject.

Narra-note 2: Takabe has one moment in the narrative where he speaks his truth. This event is, in our view, a fundamental event in the narrative. The very fact that he is able to become conscious of the truth of his feelings and able to fully accept them is what makes him immune to Mamiya’s mesmerism – the title of the narrative denotes this moment. Takabe is able to create a non-lying moment concerning his own subjectivity and desire.