“Takayama Kohei has potential as director as he treats the spectator on some truly exquisite shot-compositions and frames the devastating effects of alcoholism and the importance of love in the coming into being of the subject in a precise and creative way.”

Even though Kore-eda won the Palme D’or with his socially engaged Shoplifters, one should not forget that other directors are producing socially engaged narratives, narratives that underline various pressing problems in contemporary Japanese society, as well. One such director is Takayama Kohei.

One day, Shosuke is called by his sister to announce that his mother is ill and will soon die. From the very first minutes of the narrative, i.e. the exchange of loving words, it is clear that the narrative aims to explore the theme of love. But rather than approaching this theme in a positive way, The Path Leading To Love approaches the importance of love from a negative viewpoint. By subtly exploring the superficiality of uttering loving words, the blindness a subject can have towards love, and the inability to love due to an intimate relationship with alcohol, Takayama Kohei touchingly unearths the importance of love in the process of becoming a ‘socialized’ subject.

All these aspects are approached by framing the life of Shosuke, our depressed and lethargic lead, in an intimate way.

His emptiness – this is very sensible in his communicative failures – dictates the emptiness that characterizes his relationship with Sawako as well as the entire narrative space. In other words, the spectator feels that something is missing, something that could be situated in the register of affection.

Shosuke’s inability of functioning in a positive way is short-circuited by his intimate relationship with alcohol, a relationship that puts him in fact outside society. Kohei beautifully shows that while problematic drinking has a function, i.e. to try to cope with past failure, to try to exorcise the seemingly traumatically insisting past, it has by definition deregulating effects on the social level – the seducing power of alcohol making each promise an empty one. But Shosuke’s problematic alcohol consumption reveals an even deeper underlying subjective problem: he is not able to transform moments of personal setback into something productive on a subjective level. In other words, Shosuke is stuck in the position of passive victim and fails to show any tendency to take subjective responsibility (Narra-note 1) 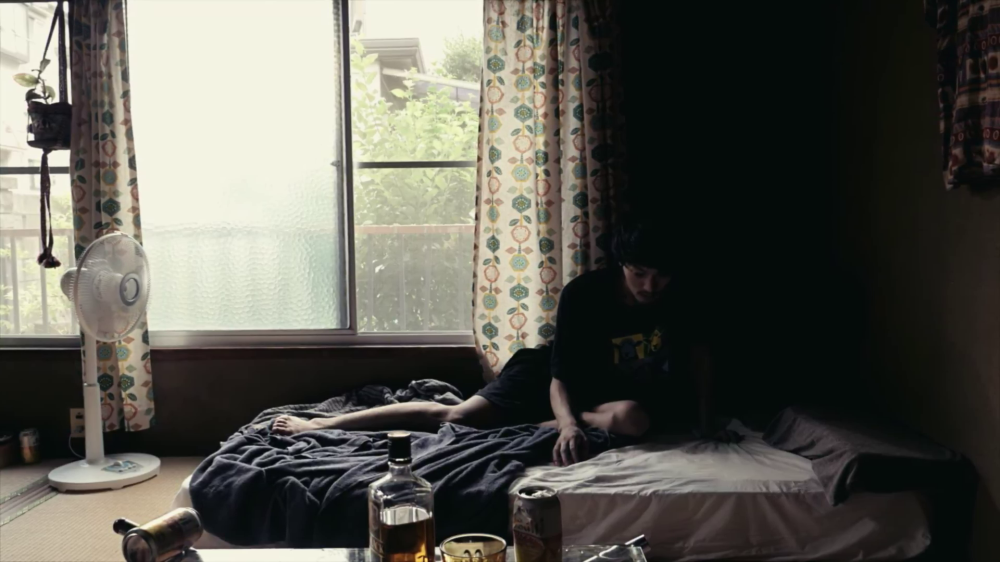 The cinematography of The Path Leading To Love is well thought-out and reveals a director who knows how to communicate with the moving image (Cine-note 1). The narrative features some beautiful shots and compositions, e.g. Shosuke’s affectionate encounter with a nude statue and the beautiful long take to frame Shosuke’s encounter with Sawako. And while these moments are the main cinematographical highlights of the narrative, Kohei’s ability to communicate with the moving image is best illustrated by his use of the shaky shot. 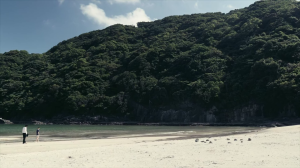 But alas, the cinematography also features some impurities that hurt the overall cinematographical flow. In one instance, the continuity between two consecutive shots is slightly off. Near the end of the narrative, Shosuke’s place in two consecutive shots is different, breaking the continuity of the narrative space. Impurities can be noted at the level of sound as well. In some instances, transitions of sound lack the smoothness the flow of imagery asks for (sound-note 1). In contrast to the sound, the integration of the soft post-rock like music is flawless. As the music ebbs and flows – subtly empowering the forlorn mood characterizing Chosuke and his interactions.

Even though The Path Leading To Love is already a great narrative, one can feel that Takayama Kohei is still in the process of finetuning his own style, a finetuning that would make his narratives even more powerful. Despite his ongoing process, it is nevertheless clear that Takayama Kohei has potential as director. He treats the spectator on some truly exquisite shot-compositions and frames the devastating effects of alcoholism and the importance of love in the coming into being of the subject in a precise and creative way.

Narra-note 1: It is difficult to interpret the subjective effect of the Shosuke’s new manga, due to his problem of alcoholism. This manga, as it seems a minimal elaboration of what happened between Chosuke and Sawako, is nevertheless a different solution than the solution of consuming alcohol.

Cine-Note 1: The narrative is framed with a concatenation of temporally long fixed shots and, in some instances, steadily moving shots.

Cine-note 2: This defining moment also returns in the overlaying of shots. In this way, Kohei is able to evoke what haunts Shosuke while he is living his life.

Sound-note 1: In the narrative certain images are accompanied by speech – sometimes fragments of uttered speech that were vocalized in the past, sometimes narrating speech. In the beginning of the narrative, this overlaying might feel odd for the spectator as Shosuke’s subjective position is not yet known to the spectator. As the narrative progresses the overlaying becomes more natural.