“[A beautiful narrative that shows] that a genuine bonding, a bonding beyond the preoccupation with the superficial ego-images, is still possible – and is now more needed than ever.”

With The Name, Akihiro Toda, born in 1983, already presents his fourth feature-film. While he still widely unknown as a film director – especially for foreign audiences – he made his feature-film debut already in 2008 with Hana no Fukuro. His second and third feature film, respectively Neko Ni Mikan and Yokotawaru Kanojo, arrived in 2014. And now, in 2018, he presents his adaptation of a narrative written by Michio Shusuke, a Naoki prize winning author.

Akihiro Toda’s The Name, already the closing movie of Osaka Asian Film Festival, is now slowly entering the international festival circuit – its first stop being the Udine Far East Film Festival. Let’s see if this indie-narrative should be on your to-watch list.

One day, a guy (Kanji Tsuda) visits an open house, either to rent or to buy, and is urged by the salesman to fill in some papers. As his name, our guy writes Taro Suzuki. Not long thereafter, one of his female colleagues, a colleague very much interested in Suzuki-san, addresses him as Yoshikawa-san. After arriving home the very same evening, the girl who is staying over designates him as Ishii-san. And the neighbour complaining about Ishii-san’s trash the day after, gently yells Nakamura-san to attract his attention.

One day at his work, where Masao Nakamura is known as Yukihiko Kubo, his boss suddenly confronts him with the strange fact that no-one in the hospital has ever heard of his wife. Before he is able to give an explanation, Kubo and his boss are informed that a visitor is waiting for the former. The unexpected visitor appears to be Kubo’s daughter Minako (Ren Komai). But, strange as it may be, Kubo doesn’t have a daughter. And, veen worse, the girl, Emiko, posing as Kubo’s daughter,

appears to know all about our subject’s toying with names and ego’s (General-note 1).

The Name establishes the fact the ego, as an image circulating within society, is ever relational: by speaking we evoke an image of ourselves in the other, an image ever designated by a name. This relational aspect is sensibly shown in the various interactions our male subject has with secondary characters, characters who can only interact with him at the level of image they have constructed of him – a construction based on our subject’s speech. But while the ego is relational, it is also evident from the narrative that this ego, as constructed in interaction, acts as a protection for our subject.

While seeing the games our subject plays with his colleagues is already amusing, the narrative becomes truly amusing from the moment our subject, the man of many facades, meets Emiko Hamaya, the girl who knows about his facades (Narra-note 1).

The many facades of our subject have only one purpose: to hide his subjective position (uchi) from society, the Other (Soto). From the perspective of society, the Other, our subject would be seen as failure. In other words, his flight into the creation of a myriad of ego-images is his way to hide his subjective from himself and society and to escape from the judgment of the societal eye. The difference between one’s subjective position and one’s ego-image is the central axis of this narrative. In this way, by touching upon the inherent lying nature of the ego, the partial lying nature of speaking, and the alienating effects of a problematic preoccupation with the ego-image, 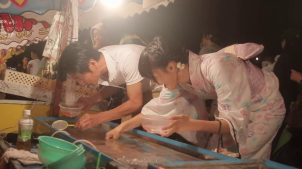 Akihiro Toda is able to turn The Name in a lighthearted and charming meditation on relations in contemporary Japan. While our ego-image will always be deceptive – first and foremost for oneself, it is still possible to meet someone in a genuine way, a way in which the societal ego-images have lost their primary importance (Narra-note 3).

The possibility to meet someone in a genuine way is subtle revealed by putting the spectator into touch with two different levels of speaking, i.e. empty speech and full speech. Empty speech is the speech that concerns nothing but the ego, but full speech is that speech that, grasped within interaction, delineates one’s subjective position – in first instance for oneself and, in second instance, for another subject (Narra-note 4). There are many moments in the narrative where either Emiko or our subject express something of

their subjective position, but, for our subject, the single most important one is the revelation of his real name – The Name.

The cinematography of The Name provides a pleasant mixture of fixed shots and near-fixed shots, i.e. shots characterized by a slight tremble. The latter sort of shots, even if they are less prevalent then the former, subtle enforce the naturalness of the narrative space (Cine-note 1). The cinematography also incorporates less subtle but measured movement. This following movement, by mirroring our subject’s and Emiko’s movement within the narrative space, quickly reveals both of them as the main focus of this narrative (Cine-note 2). In some instances, unintended shot-tremor can be noted, but this tremor doesn’t break the cinematographical continuity or distract the spectator.

While The Name is a lighthearted narrative, it doesn’t fail to touch upon a important problem within contemporary Japanese society: the preoccupation with ego-images, a preoccupation that ultimately leads to nothing other than the alienation of the subject. The power and the beauty of this narrative, enforced by the great chemistry between our main leads, lies in showing that a genuine bonding, a bonding beyond the preoccupation with the superficial ego-images, is still possible – and is now more needed than ever.

Narra-note 1: It is evident that the various facades of our subject have a common denominator: his being. While names and stories differ, our subject stays the same at the level of his being. At one point, Emiko underlines his being by kicking him and saying “You ARE right here”.

Narra-note 2: It is also funny to see how our subject has to integrate the presence of Emiko in the various images he has constructed in relation to others.

Narra-note 3: It is clear that the relation between Emiko and our subject goes deeper than just a daughter-father relation.

Narra-note 4: In the fight between Hayama and her senior during the rehearsal of the play, both subjects ‘lie without knowing’. There is not true self, no true ego. And, as mentioned before, the act of speaking, the act of presenting oneself to another, always involves an aspect of lying. What Hayama’s senior could mean – in light of the themes of the narrative, is that Hayama has not confronted herself with her own subjective position.

Cine-note 1: The slight tremble that characterizes the framing acts as a subtle indication of framing ‘reality’.

Cine-note 2: One time a shaky POV-shots is applied as well. In one instance a more shakier following shot is used as well.