For our first interview, we sit down with the director of Bamy, Jun Tanaka. Throughout the interview, we talk about his decision to make a fiction movies, the difficulties of working with a small budget, the importance of fate and ghosts, his influences, … etc. This interview proves to be a very interesting read into the mind of a promising Japanese director.

[Our Review of Bamy can be read here. The Japanese version of the interview can be found here]

P-C: You made a – if you allow me to use the word – strange trajectory in life. You studied at the Faculty of Economics at Shiga University, then followed a documentary course at the Film School of Tokyo. In the end, you made a fiction movie. Could you explain this trajectory somewhat?

J.T: Certainly, I think life is sometimes strange. But it is also true that most parts of life are indifferent. I think we [shouldn’t or] aren’t supposed to rely too much on [stuff like] miracles and luck.

When crafting a movie, I find the thought “prepare one half very carefully, and let the other half be seized by accident on location”. I learned this way of thinking at the documentary course at the Film School of Tokyo. [It might be surprising, but] directing and preparing is also necessary for documentary films. And coincidence is also indispensable for fiction movies.

Sorry, I forgot the reason… but…, during high school I wanted to be a journalist. Therefore I went to the Faculty of Economics at Shiga University as the majority of the newspaper articles were articles about the economy. But while the professor in charge talked with excitement, I could not get excited about the [basic and] rudimentary economic theories. On the other hand, I got very excited to help my friends who were making films as their hobbies

Then, I also started to make my own films. I wrote scenarios very carefully at the beginning, however, I became lazy to write them eventually. It is because I had to take the role as the camera man, director, and assistant director. I would still like to do location hunting quickly and start filming, afterwards editing. That is why I think I chose the documentary course. That being said, I didn’t know what films were all about at that time.

P-C: You didn’t have a large budget to shoot this movie. Some artists say that creativity is born out of limitations. What is your opinion on that?

J.T: If you have found such ideas in BAMY, I am very happy. 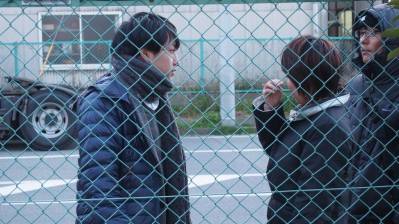 However, I think the biggest tragedy of low budget movies is that the director will take less time to think about his movie as a director and think about the cinematography. When the budget is small, the director immediate has the become the operator, the assistant director and the producer. [Normally,] everyone has his respective professional position [so,] to having to play all the roles on your own is not easy. Many Japanese indie filmmakers are forced to become a generalist [if they want to realize their projects].

P-C: As a first time director. Can you explain us some of the joys and problems that went into making your debut feature?

J.T:  I was so happy that I could reconfirm the feeling that making movies is fun. And luckily, the idea for my next movie came up while we were shooting. I think that the idea I got when I was enjoying myself will result in a fun movie. I dare say that my next movie will be more entertaining.

One problem was that it took a lot of time to communicate with the staff. This is unavoidable, as I am not a famous director. I was not trusted by everyone, as I was supposed to be like an amateur. To better the communication and to build trust between me and the staff, sacrificed some scenes.

P-C: Who has been the biggest influence on your cinematographical style?

What concerns the cinematographical style for BAMY, Kiyoshi Kurosawa’s name will always be mentioned. That is a great honor for me. Mr. Kurosawa is an excellent filmmaker who represents Japan and I am also a big fan of his work. So of course I am greatly influenced by his work. But, for me, he is still a star in a distant world. Even if I try to imitate him, it seems to me that he can hardly be imitated.

P-C: Which kind of director do you aspire to become? What should people expect from a Jun Tanaka movie, if they decide to go see one in the future?

J.T: I love Robert Zemeckis’ Back to the Future. Just like Back to the future, I have always wanted to make such fun, rich and amazing film.

P-C: The story is about the red thread of fate, it structures the entire narrative, just as the myth would structure one’s love life. Why the choice to create a narrative around the lover’s fate?

J.T: I always want to see movies that are full of delightful surprises. I think that [ the experiencing of “surprise” provides a very rich movie experience. For me, “surprise” means “unpredictability” and “incomprehensibility”.

Jean-Luc Godard once said that a film can be made with just a man, a woman and one car (Note 1). I think it is true. In short, the narrative of the movie requires the existence of a third person [or a gadget] that causes the relationship between two people to change.

In the case of BAMY, that third person is the “red thread of fate”. I wanted to make that third person an incomprehensible presence. When the human drama of the young lovers seems to fall into harmony, I wanted to forcefully change that flow in an unpredictable direction. Is “God”, “Fate” , “Curse” not the most aggressive and unreasonable power in this world?

P-C: How important is fate in general and the idea of the red thread of fate in particular in your life?

J.T: I received the following question from a certain actor: “I have read the scenario, but I don’t understand why this woman fell in love with this man”. I could not explain [or provide an answer], because I think that there is no reason for people and people to fall in love.

P-C: Besides the fact that the story is about inescapable fate, the narrative also concerns ghosts – ghosts are an important part of Japanese culture. What made you decide to approach fate from the perspective of ghosts? 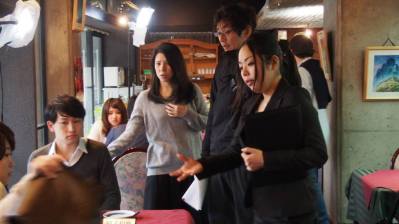 I like the motif of “mismatch of gazes”. Gazes are, I think, a very cinematographical material. In the relationship of Ryota and Fumiko, they always miss each other [,they are unable to meet]. This “missing each other” is expressed through Ryota and Fumiko’s gaze, namely by their line of sight.

The mismatch of gazes is simply amplified by the contrast between persons who can see ghosts and those who cannot see ghosts. This is also similar with [the contrast with] the relationship between Ryota and Sae.

P-C: The ghosts, by way of the expert use of lightning, reside mostly in the shadows, disturbing the view of the spectator. It is an unsettling effect. Could you explain how you decided to approach ghosts from the level of that what disturbs the view?

J.T: I am afraid of the darkness. Because, as one can’t see well in the darkness, it remains enigmatic and mysterious.

At least for Japanese people, ghosts are not considered as monsters. Based on religious views, they instead represent psychological darkness. [So ghosts are scary,] we are afraid, when the ghosts are far away and unclear. When they are exposed to solar light or attacked by psychical action, we are not afraid. These ghosts can be attacked by guns and swords and, one day, we will analyze their weaknesses and they will be subjected to experiments or be kept as domestic animals.

The ghosts in Bamy are very Japanese. But, as the story goes on, the ghosts change into a tiny presence, just like a cockroach. One of the themes of Bamy was this “change in fearing ghosts”.

P-C: In my review of Bamy, I already underlined my wish to see your next project. Could you already reveal some of your plans of the future?

J.T: The theme of my next work will be “mermaid transported to Tokyo Bay by ballast water”. I plan it as an action road movie utilizing problems/questions of alien species and immigration. Furthermore, I’m also interested in the theme of a family story, in which the members of the family are played by car test device dummies.

P-C: On the level of the hiragana – I don’t know about the kanji – there is a peculiar resemblance between Sae and Saeki. I can’t get it out of my head. It doesn’t seem coincidental. So is there a reason for that?

P-C: The end of the narrative is the beginning, the throwing away of the red umbrella revealed as the very beginning the relation going downhill. Was the narrative meant to be circular?

J.T: Certainly, at first glance, the story seems to be circulating. However, by the end of the movie the relationship between Saeki and Fumiko should have changed a bit. Concerning the last scene, I did not give that scene the colour tone effect of horror movies. Instead, those shots are very plain and the image of the video camera is vivid.

Like the ordinary tool “the red umbrella” indicates, I like the concept of “[things that] appear to have a harmless existence at first glance, but in reality have a truly terrible existence”.

Note 1: The quotation that Tanaka Jun attributes to Godard, seems to be an error. Even though a lot of people attribute the following similar quote “All you need for a movie is a gun and a girl” to Godard, he himself repeatably underlined that it was Griffith who first said it.