If Yuki Yamato proved anything with her highly successful and popular adaptation of George Asakura’s manga Drowning love, it was that well-composed visual poetry can truly breath life into a romance narrative. Four years after Drowning Love, Yuki Yamato, armed with a creative and energetic vision, offers her interpretation of Miki Aihara’s Hot Gimmick.

One day, Hatsumi (Miona Hori), an ordinary but passive schoolgirl, meets up with her younger and more outgoing sister Akane (Hiyori Sakurada) to give her a pregnancy test. Surprised by the sudden appearance of their older brother, Shinogu (Shotaro Mamiya) and desperately trying to hide the pregnancy test, Akane eventually ends up losing it. Not long thereafter, Ryoki Tachibana (Hiroya Shimizu), who lives in the same apartment building, confronts her with the pregnancy test he found. To keep him silent, Hatsumi offers to do anything for him. He asks her to become his personal slave.

Before the deal can be sealed, they are interrupted by Hatsumi’s childhood friend and now a popular model, Azusa Odagiri (Mizuki Itagaki), who decided to move back in the neighbourhood. Even though Ryoki tries to interfere, Hatsumi, who feels attracted to Azusa, eventually ends up going on a date with him.

While Hot Gimmick, in its opening moments, might seem to be a narrative about two guys fighting over one girl – Azusa trying to captivate Hatsumi by utilizing his image as model and Ryoki attempting to make her his by turning Hatsumi into his slave, Yamato’s narrative quickly reveals itself as focusing on Hatsumi’s coming-into-being as subject. It is, in fact, her interactions with Azusa, Ryoki, and, additionally, Shinogu, that propels Hatsumi’s coming-into-being as subject, that urge her to take reins over her subjectivity.

Hatsumi’s romantic encounter with Azusa ends badly. Azusa, seemingly romantically interested in her, eventually abuses his image of being a successful model to take advantage of her. Hatsumi, in other words, lets herself be deceived by the attention he, as successful model, gives her. His repeated (but empty) utterances of Hatsumi being ‘cute’ have, in this respect, one sole purpose: to please her ego in such a way that it becomes easier to (ab)use her for his own revenge.

Hatsumi’s encounter with Ryoki is different. After being coerced into becoming Ryoki’s slave, becoming his property, he is quickly to underline that he, in fact, does not want to own her as slave, but as girlfriend (Narra-note 1). He wants – and he is very clear in this – her and only her.

The ‘abusive’ dimension of Ryoki’s interactions with Hatsumi also has another effect. His abusive speech-acts tear down the safe ego of ordinariness Hatsumi has clothed herself with and confront her with the problematic dimension of her preoccupation with the image. Not only does her preoccupation with how others see her dictate her comportment, it also disallows her to question the subject behind the captivating image, i.e. Azusa (Narra-note 2).

When Ryoki uses the signifier ‘indecisive’, blames her for not deciding anything by herself, he points to nothing other than the fact that she has not yet assumed her position as subject, that she is not able to take a position as subject and meet the other as subject because she is stuck in the mirror-maze of the imaginary (Narra-note 3, Narra-note 4).

Eventually, after Hatsumi falls prey to Azusa’s revenge, Hatsumi asks Ryoki to help her with becoming less stupid. While, at the surface, this desire concerns her scores at high school, her desire actually concerns her wish to not be so easily duped by the image as well as her wish to not let others define her self-image (Narra-note 5 (spoiler)). Ryoki accepts Hatsumi’s request, effectively transforming their former relation of master and slave into a relation where both can bring something of their subjectivity into play. This relation is, in truth, the only relation within Hot Gimmick where something akin to an inter-subjective exchange takes place. 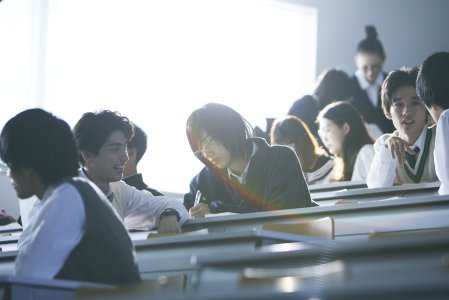 Hot Gimmick is composed with a lot of cinematographical movement. While fixed moments are of course present most shots are, in one way or another, marked by camera-movement. While this use of movement already makes Hot Gimmick a pleasing narrative to watch, the most pleasing moments of Yamato’s narrative are those moments where movement is applied, together with a diversity of techniques like slow-motion, to deliver more artfully composed sequences (cine-note 1). Beyond heightening the overall visual pleasure, these more artfully composed sequences also reconfirm Yuki Yamato’s talent and skill as director (cine-note 2).

Spectators who have seen earlier work of Yuki Yamato, like Drowning Love (2016) and her sequence in 21th century girl (2018), will know that musical accompaniment is integral to Yamato’s style of composing. Hot Gimmick is no different. Not only does the musical accompaniment support the flow of the cinematographical compositions, especially the more artful ones, the music is also highly effective in giving the various interactions between characters a dramatic and emotional weight.

Another element that heightens the visual pleasure of the narrative is the pleasing colour and lightning-design. While natural lightning and colour is used, Yuki Yamato also employs colour in a compositional and more expressive way, further emphasizing the emotional weight of certain scenes.

Hot Gimmick is an amazing narrative, but the evocative nature of Yamato’s adaptation might confusing many spectators – especially those expecting a standard Japanese rom-com (General-note 1). Yamato offers, at least for those who are open to it, a visually powerful exploration of the deceptive nature of the imaginary within romantic interactions as well as an exploration of that exploitative aspect that always seems to be in play whenever human beings engage in ‘romantic’ exchanges at the level of this imaginary. But, more than anything, U-ki Yamato offers, with her visual and vocal poetics, a powerful evocation of the importance for the subject to assume his own subjective position to desire from.

General-note 1: Another aspect that could put off many spectators is the very content of the narrative as well as the vague cohesiveness of the narrative. Especially those spectators  focusing on the former might fail to see how Yamato rewrote the manga into a narrative concerning the coming-into-being of a female subject.

Narra-note 1: That Ryoki’s enslavement and his desire to own Hatsumi is born from his insecurity and the difficulty he has with trusting the female other is not really made explicit in this narrative. By explaining Ryoki’s comportment as being function of a patriarchal society, one denies the subjective dynamics that animates his behaviour as well as the power-dynamics that marks all human relationships.

Narra-note 2: That the dimension of the imaginary, as luring as it is deceptive, is what bothers Ryoki tremendously is also evident in his very rejection of going with his classmates to let of steam with some high-school girls. What he, in fact, rejects is (ab)using his image of being a student at a prestigious school in order to get, by taking advantage of (dumb) girls, some quick satisfaction.

Narra-note 3: While some spectators might find the following strange, but the very emptiness that Hatsumi feels, the very emptiness that she has come to accept as her own, is the most subjective aspect of a human being. In more psychoanalytical terms one can say that Hatsumi is confronted with her lack of being (manque à être), the lack from where metonymic desire can be born.

Narra-note 4: The essential shift in Hatsumi’s subjectivity is that she does not wait until she is taken (advantage of) or offer herself to those that show interest in her, but that she, as subject, from her own body and her own voice, can choose who to be with.

Narra-note 5: Spectators should notice that the stupidity for which Hatsumi asks help for is a different kind of stupidity than the one she assumes at the end of the narrative. The latter stupidity has to do with not knowing where the future will lead Hatsumi and Ryoki.

Cine-note 2: The high tempo of the narrative and the compositional style of Hot Gimmick might strain some spectators. While some might argue that the narrative lacks cinematographical rest-moments, the inclusion of such moments would have defeated Yamato’s purpose. With its high tempo as well as with its fluid compositional style, Yamato tries nothing other than to communicate, via the cinematography, the experience Hatsumi has, an experience that initially, overwhelms her and confuses her deeply.