As we of Psycho-cinematography are always interested in exploring new directorial talent, we are always on the look-out for opportunities to introduce our readers to new and fresh voices in Japanese cinema. This time, we introduce Hiromichi Nakao, who succeeded in winning Pia Film Festival’s grand prize in 2019, by reviewing his award-winning narrative Obake (2019).

Obake is a self-referential work. It is a self-referential work not only because the fragments of the movie, The Balloon (2007), within the movie is an actual short-movie directed and written by Hiromichi Nakao but also because Nakao himself, his movies, and his style of working form the main subjects of conversation between the ghosts – ghosts voiced by Keisuke Kobayashi and Shunpei Tomoyasu (General-note 1). 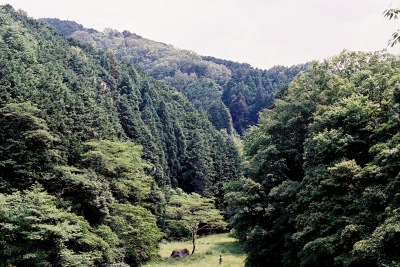 This self-referential nature of the narrative is used to praise himself, but in order to paint a tongue-in-the-cheek self-portrait, a self-introduction full of self-relativizing humour. Aspects that are touched upon in Obake are the DIY nature of Nakao’s directorial work – i.e. being director, actor, screenwriter, cameraman, … etc. at the same time, Nakao’s way of working, and how his choice for cinema impacted him and the people around him.

Besides being a self-relativizing self-introduction, Obake also functions a way for Nakao to express his desire as director. Spectators won’t fail to notice that whenever a cinema is framed the cinema is marked by an emptiness, that there is a lack of audience. It is by contrasting this emptiness with the positive opinion on Nakao’s work one the ‘ghost’ has, that Nakao’s subtle fantasy/desire is able to become expressed. The ‘ghost’, as fantasized presence and, at the same time, as an infinite absence, evokes nothing other than the fantasy every content-maker has that there is someone out there that appreciates/loves the work of art the person makes.

The fact that Obake is a self-introduction is also emphasized by the inclusion of documentary or documentary-like fragments, like the fragments of a Q&A session with Nakao after a screening of The Balloon (2017) for instance. While the sketching out of Nakao’s portrait as director benefits from these documentary sequences, the self-introduction as well as the self- relativization is function of the tongue-in-the-cheek conversations our bodiless commentators have with each other about our director – one being a fan of Nakao’s work, the other being completely new to his oeuvre. Due to the importance of these conversations – conversations driven by a wanting-to-know, it should be clear that Obake, despite being full of interesting visual quirks, is a work that emphasizes speech over visuals.

But Obake is, despite its documentary-like aspects, still a fictional narrative. This becomes evident when the ‘ghosts’ decide to intervene and help Nakao complete his latest project. This fictional act, an act allows Nakao’s narrative to realize its  full absurdity, can also be read as a questioning of the viability of making a narrative from beginning to end by yourself. Does this fictional act not, at a certain level, communicate Nakao’s desire to involve more people in his passion for crafting movies (General-note 2)? Important to note is that this sudden shift to absurdity reveals the self-referential dimension of Obake even more. What is shown in the first half of the narrative, in the guise of a documentary-like exploration of the preparations for Nakao’s latest movie, find their ‘real’ narrative function in the second part of the narrative (General-note 3). This sudden shift also engenders the feeling, which is later corroborated, that Nakao’s self-introduction is more fictionalized than it appeared at first glance. Nevertheless, this does not mean that this narrative does not touch upon some truth of Nakao’s subject.

Nakao’s narrative is framed with a concatenation of static shots, a concatenation only sparsely broken by some cinematographical movement. While this composition as such does not provide anything out of the ordinary, Obake features inventive DIY elements. The first element concerns the star-filled sky-like shots with concentrated spots of light that light up in accordance to sound or speech. These shots of a star-filled sky, by being visually abstract, further underlines that the signifier and the spoken word takes precedence over the visual aspect. The lightning-up of the concentrated spots of lights  (the red and the green one) highlight the act of speaking as such as well as differentiate who in the current conversation is speaking.

Those who speak are, in fact, speaking beings lacking a real body, lacking a real presence in the world – ghosts indeed. This is made explicit by the second abstract visual element. One of these speaking beings, who likes to visit earth, is visualized as a travelling ball of light. Of course, once the spectator realizes that the ghosts are visualized as a travelling ball of light, some of their conversations become truly absurd, due to the fact that the voices, the concentrated spots of light, speak as if they have a real body. The third inventive element – a true visual element, concerns the strange but mesmerizing stop-motion sequences in the second half of the narrative.

Hiromichi Nakao’s Obake is one of the finest examples of how creative one can make a self-introduction. Nakao’s self-referential  narrative is, to be very clear, not a documentary. Obake is a low-budget and tongue-in-the-cheek sci-fi narrative that questions Nakao’s subjective choice to be a DIY director. This narrative proves that creativity still has a place within the art of cinema.

General-note 1: Nakao’s self-referential movie also features making-of sequences of Obake. These sequences may seem like a normal documentary, but the tongue-in-the-cheek shot of the storyboard thrown on the ground reveals nothing other than the fact that this making-of sequence in particular and the whole of the narrative is staged and scripted.

General-note 3: Please note that Nakao had collaborators for his previous narratives (e.g.  Tatsunosuke Hanado, Atsuko Hatano, Takuya Dairiki, Takashi Miura) and that he, in fact, did not do everything alone. The same is true for this narrative.