While Japan abuses Christian holidays like Christmas and Eastern for commercial gain and Christian-styled weddings are widely advertised, one might forget that there are Japanese people, three million according to some reports, who truly follow the teachings of Christ.

And despite being a minority religion, it has not failed to find a form of expression in Japanese literature and in visual media, like Sion Sono’s four-hour long epic Love Exposure (2008). And now, Hiroshi Okuyama present us Jesus, another narrative that takes Christianity as an important narrative element.

After the death of his grandfather, Yura Hoshino (Yura Sato) and his parents return to his father’s hometown to move in with Yura’s grandmother. Yura’s father has, despite his wife’s worries, enrolled his son in the nearby Christian school.

As Yura has never been to such kind of school, he struggles to adapt to this strange environment of which he does not understand a thing. One day, he sneaks into the school chapel and asks Jesus to help him make a friend. To Yura’s surprise, a miniature Jesus (Chad Mullane) appears in front of him. 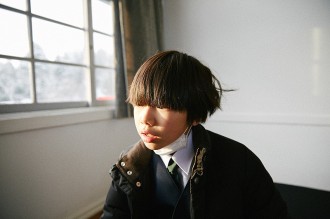 Jesus gives, due to its setting, the spectator a subtle insight at how a Christian elementary school differs from an ordinary elementary school in Japan. The most obvious difference concerns the inclusion of worshiping/praying in the school schedule. Other differences include bible references on the black-board, a cross hanging in the classroom, and the presence of multiple bibles and hymn-books in the classroom. For westerns viewers, especially those born in catholic countries, it might come as a surprise how seriously Christianity is integrated in the daily school-schedule and how Christianity forms an integral part of the curriculum.

If we look closer to how Yura tries to fit in this new environment, we can discern a well-known strategy with regards to the divine: ‘I do not believe in you, but if you do exist, help me’. In Yura’s case, he addresses, despite not believing in God/Jesus, a prayer to Him in order to receive help for making friends. This strategy beautifully evokes the given that people often address higher forces when they lack confidence in forcing a change themselves. 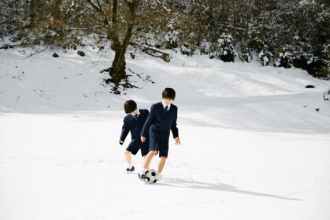 The fact that Yura succeeds at making a friend, Kazuma (Riki Okuma), after addressing Jesus turns this chance-encounter into an encounter only made possible by the divine intervention of his personal Jesus.  While the appearance of Jesus does not (clearly) turn Yura in a Christian – one could even contend that Yura’s Jesus functions irrespective of his devotion to or belief in Christianity, he’s nevertheless eager to use the wish-fulfilling power this mute appearance seemingly has for his own benefit. It is in Yura’s interactions with his Jesus – interactions that quite often feel like a form of abuse, that some comedic relief enters Okuyama’s narrative.

Notwithstanding the Christian elements, the theme of Okuyama’s Jesus concerns the process of adapting to a new (somewhat alien) environment and the importance social bonds have in such a process. The appearance of Jesus should thus be read as a result of Yura’s imagination in order to aid him in his integration (Narra-note 1). It is not difficult to see that most of Yura’s wishes/prayers aim to consolidate his bond with Kazuma.

But while Jesus starts off lighthearted, the narrative ultimately takes a dramatic turn. Without revealing too much, we can still disclose that when Yura needs Jesus the most, he fails to appear. While various reasons for his disappearance can be formulated, the most obvious reading is that Yura’s Jesus is only able to turn moments of chance into supposed moments of divine intervention (Narra-note 2). When chance is not implicated in the situation Yura wants changed, when the asked intervention goes beyond Yura’s wish to fit in, his Jesus fails to appear. While some might argue that Jesus by his disappearance, allows Yura the experience of suffering, it’s more correct to state that Yura hits the limit of his imagination.

Through this dramatic turn, Okuyama is able to confront the spectator with a sore point of religion: the ever existing divide between the act of praying and their (lack of their) fulfillment. In the case that one does see one’s prayer fulfilled, it is, as Okuyama underlines, function of interpretation and not of actual divine intervention. But this dramatic turn also allows Okuyama to end Yura’s narrative in a true positive way (Narra-note 3 (spoiler)).

The narrative of Jesus is, for the most part, composed with fixed shots. Nevertheless, two types of cinematographical movement can be discerned in the composition. The first type, a type used rarely, is function of a narrative element, i.e. a driving car, and not by moving the camera as such. In other words, the fixed shots become moving, because the fixed point of shooting moves (Cine-note 1). The second type of movement, true following movement, is applied to frame Kazuma and Yura playing in the snow.

Both forms of movement are marked by a certain level of shakiness. But while this shakiness, in the second form of movement, is a deliberate choice, the shakiness in the first type of movement feels more like it was a consequence of technical limitations (Cine-note 3). Nevertheless, this difference has no real impact on the ‘harmony’ of the cinematographical composition. 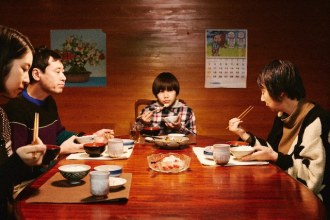 Of course, such cinematographical simplicity puts (more) emphasis on the performances of the actor/actresses. As there is no cinematographical flourish to empower emotions or actions, the narrative is solely carried by the acting as such. And the acting, especially the acting of Yura Sato, does not disappoint. His endearing performance makes it very easy for the spectator to comprehend his initial struggle, to empathize with his suffering, and to feel the importance of his formative act (General-note 1).

The imagery of Jesus is pleasant to look at, due to the natural lightning design and the pleasing colour palette it enables (Lightning-note 1). The fact that the lightning design is natural is made evident by the various moments of overexposure – i.e. those moments where the white of the snow is a burning visual presence within the frame – that mark the narrative’s framing. While such moments of overexposure can be said to be problematic from a photography perspective, these moments are not misplaced within the natural atmosphere created by the interplay of colour and lightning.

While the visual integration of Jesus in the narrative space has some near-perfect moments, there are also moments where his integration feels ‘incorrect’. His ‘fakeness’, a fakeness the spectator can always sense in one way or another, is born from the subtle differences that exist in lightning. Yet, given the limited budget and the lingering fakeness that surrounds Jesus, the visual integration of his Holiness in the narrative space is still impressive.

Jesus is, when all is said and done, a great narrative and a promising debut of Hiroshi Okuyama. While the narrative starts off lighthearted, Okuyama’s evocation of the irreducible tension that exists between praying and the lack of results enables him to turn Yura’s narrative into a truly touching tale of subjective growth and emancipation from religion.

Narra-note 1: Yura’s materialistic wish for money should be seen as testing the boundaries of Jesus’ wish-fulfilling potential.

Narra-note 2: Jesus leading Yura to the hospital seems an exception to this rule.

Narra-note 3: At the end of the narrative, Yura is able to perform a true subjective act. By smashing Jesus out of his life, Yura communicates that he will, from now on, rely on himself in order to find his way in life.

Cine-note 1: If one shoots a fixed shot from a driving-car, this shot becomes moving because the car moves and not because the camera as such moves.

Cine-note 2: One can also sense this later in the narrative. While an attempt is made at making a fluid moving shot of Yura running, this shot is initially jerky. Only after a while, the shot attains the intended fluidity.

Lightning-note 1: In some cases the lightning design even supports shot-composition as such.

General-note 1: Even those that are knowledgeable of Christianity might have a position of not-knowing with regards to the daily structure of a Japanese Christian elementary school.