With Yasushi Sato’s novels being brought to the silver screen in the last couple of years – e.g. The Light Shines Only There (2014), Over The Fence (2016) and And Your Bird Can Sing (2018), one might forget that certain works of other Japanese writers have been cinematographically adapted. One such writer is Kanae Minato. Narratives like Confessions (2010), Penance (2012) and The Snow White Murder Case (2014) are all based in her novels. Homecoming is the latest movie to be released based on her work.

Nine years after he left the island, a transfer of elementary school sees Wataru Osaki (Shunsuke Daito) returning to his island of birth in order to take up a teaching position at the Shiratsuna Elementary school.

Upon his return, he accidently meets Mutsuko Tayama (Shihori Kanjiya) and her daughter. While giving her a lift, he surprisingly hears that her husband works at the same school as him. While reminiscing about their childhood, Mutsuko remembers – and tells her daughter when she asks about it – her childhood-wish of going to Dreamland, a wish whose realization was thwarted by Mutsuko’s very strict and controlling grandmother.

While Homecoming tells two separate narratives, a fact emphasized by giving both sequences a different title, the underlying theme is the roughly the same. Before further exploring this theme, a theme concerning the process of subjectivity as such, let us first explore the particularities of each narrative.

Mutsuko’s narrative turns around her childhood dream, her dream to go to Dreamland. Already early in this narrative, it is made clear that this dream became, for our subject, a symbol for the impossible. It is not so much that Dreamland became a screen upon which she could project her desire as impossible to fulfill, but that Dreamland became a stand-in for the impossible as such, an impossible – an impossibility to attain subjective freedom – that might one day become possible – maybe after the dead of the grandmother (Kazuko Shirakawa).

It should not surprise us that this symbol of the impossible, so central to Mutsuko’s subject, has disturbed her relations with her mother. Due to the failure of Mutsuko’s mother (Tae Kimura) to actively guide her family’s life – her mother being subjected to the strict and oppressive traditions of her terrorizing grandmother, and her mother echoing the voice of the grandmother, Mutsuko has forced a certain distance between her and her mother (Narra-note 1). On a side note, her relationship to her mother-in-law is not without tensions either. These tensions are born from the image of The Mansion (i.e. the image others have of her being raised in a rich environment), an image that, by preceding her own speech, positions her beyond her own control (Narra-note 2).

As the narrative gives time to Shihori Kanjiya to evoke the emotional reality of her character, a reality defined by the oppressive image of the mansion as related to the grandmother and the impossible represented in Dreamland, one can really feel the lingering dissatisfaction that marks her subjectivity (Narra-note 3). The use of a narrating voice further supports the framing of this emotional reality as her narrating voice underlines her failure to actualize her subjective position through her speech. One can easily hear, as the the narrative unfolds, how Mutsuko struggles to state statements that reveal something of her subjectivity (Psycho-note 1). When she does state such statements, the subjective importance of these speech-acts are sensibly felt by the spectator.

The second narrative concerns Wataru Osaki. This narrative focuses on Wataru’s difficulty to deal with the bullying of Mia Miura (-), a bullying orchestrated by Midori Fukada (-). Even though one can understand his righteous intentions – his duty as teacher, one also feels that his ways are somewhat manipulative. But this subtle manipulation, a subtle manipulative act in order to get the truth out of Midori, is nothing compared with the manipulative way by which Fukada’s mother safeguards her child. In this sequence, we are confronted in a beautiful way to the ways by which parents keep their child pristine and how they are unable to accept any negatives about their child.

When Fukada’s mother viciously attacks Osaki’s father (Naoto Ogata) for having been a violent teacher, Osaki is surprised, but he quickly comes to realize that those memories he has about his father only paint a vague image of his father. Fukada’s statement causes Wataru to explore his relation with his already deceased father, an exploration focusing on who he actually was as teacher (Narra-note 4, Narra-note 5). By sheer luck, Wataru is aided in his exploration by a former student of his father, Hatano (Kenta Hamano). Can his story, a story framed with flashbacks, shine a new light on his father as teacher and help him in his own path as teacher?

As the first narrative concerns Mutsuko’s relation to her mother and the second narrative Osaki’s relation with his father, it is clear that Homecoming’s narrative focuses on subjectivity as grasped within the context of family. It is for this reason that both narratives are structured around the notion of guilt. It is only through the flashbacks that the spectator is brought into touch with how the experience of the past formed the subject in the present (Narra-note 6). But more importantly, both narratives reveal how a change of perspective is able to rewrite the past sort a subjective change in the present.

The beauty of Homecoming‘s narrative primarily originates from the naturalistic conversations (e.g. the interactions between Mutsuko and her daughter Nanami, how Mutsuko’s future husband tires to ask her out, … etc). This naturalistic approach is most sensibly in the way that Takeo Kikuchi, the director, uses moments of silence. By letting moments of silence exists, moments emphasizing the corporal presence as well as the facial expressions of characters, Homecoming is able to become evocative of the unsaid and the emotions that are linked with it. Of course, sometimes silence can only take up this function by virtue of what was said before (Narra-note 7)? 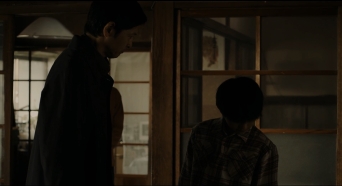 The cinematography of Homecoming is framed with a blend of fixity and fluid following movement – and occasionally as fluid spatial moving shot (Cine-note 1, Cine-note 2). While fixity and following movement alternate within shots, fixity and movement also alternate within shots as such. This internal alternation immediately reveals Wataru, while he is one the boat, as one of our main character. The centrality of Mutsuko is revealed in very much the same way, thus due to a cinematographical focus on her facial features and her movement within the narrative space (Cine-note 3). In some instances, movement focus on other characters as well, but this movement is ever related to the central character of the narrative as such.

One can feel in this narrative how the string music is ever able to evoke a certain meaningful emotion or, in other words, how music evokes an image that guides our emotive reading of the cinematic image. For instance, the music that supports the framing of the narrative’s opening has no other effect than guiding the spectator, guiding him to attribute an element of nostalgia to Wataru’s act of homecoming, to his experience of homecoming.

While the colour-scheme of the narrative is generally marked marked by a subtle subdued vagueness, a vagueness underlining the mundane reality as such, there are nevertheless some exceptions to be noted at the level of the flashbacks. These exceptions reveal that a subtle subjective dimension is in play (Colour-note 1). For instance, in the first flashback of Mutsuko’s narrative, there is a moment – the moment where Mutsuko’s dream is still deemed reachable – that is framed with more yellowish colours (Colour-note 2, colour-note 3). In Wataru’s narrative one can also find the subtle manipulation between warmer yellowish colours and weaker colours – a contrast that does not fail to underline the subjective importance of his father’s presence for Wataru.

While one can say that Homecoming centers around the notion of guilt and how this notion influences a subject’s familial relationships, the narrative’s true focus is only made revealed at the very end. The narrative shows with great clarity how we are ever a desiring subject-in-changing and how a change of ‘perspective’ rewrites past memories and influences the subject’s trajectory. With its clear message, beautiful cinematography, and naturalistic approach to conversations, Homecoming truly has become a fine piece of cinematography on the flexibility of subjectivity as such.

Narra-note 1: Her grandmother is also revealed as defining which path Mutsuko’s life should take – i.e. a nearby women’s college.

Narra-note 3: Mutsuko finds first and foremost happiness in her interactions with her daughter.

Narra-note 5: A point where both narratives “meet” is found in the fact that both Mutsuko as Wataru go look from the wish-granting carved-out cross on the grounds of the mountain temple. The act of looking for the cross reveals both subjects as desiring.

Narra-note 6: This aspect is somewhat less clear in Wataru’s narrative. Nevertheless, one can state that his non-knowledge about his father is, as is revealed, caused by how he experienced his father, an experience not unrelated to the aspect of guilt, an aspect that also marked Mutsuko’s subject.

Psycho-note 1: One could say that what makes her struggle is an uber-ich-like presence of the grand-mother. As long as her grandmother is alive, every desire she has conflicts with the restrictions imposed by the grand-mother as uber-ich.

This is why Mutsuko, after seeing her grandmother dying on the ground, is able to give herself to her future husband. That is why going to Dreamland is only possible when this ferocious prohibiting uber-ich-like grand-mother is dead. While certain things becomes possible, what Mutsuko most desired is remains impossible: freedom.

Cine-note 3: By writing about cinematographical focus on the faces of characters, we actually mean that Kikuchi often uses close-ups or medium close-ups to frame his main characters.

Narra-note 7: One such moment is when Mutsuko fall silent after having said that various things have happened. The spectator feels in this moment of silence a certain unfulfilled desire, a certain sadness about having not been able to realize certain dreams.

Colour-note 1: Let us not forget to mention that there are also a lot of scenes that are set at nighttime. These moments further highlight the (structural) dissatisfaction that marks our subjects.

Colour-note 2: Let us note that as Mutsuko’s flashback progresses the colour subtly changes. Warmer when the possibility of going to Dreamland is still a reality and more subdued when this possibility is made impossible. The colour-difference subtly communicates the impact this experience had on her coming-into-being as subject, which is how she views herself and her surrounding reality.

Colour-note 3: When Mutsuko and her mother with the big prize, i.e. tickets for Dreamland, at a raffle in the shopping street, one can discern a subtle yellowish colour-schema again. In this case, the possibility of going to Dreamland suddenly becomes possible again, a possibility immediately turned down by her angst-ridden mother.