In cinema, love is an enduring theme. The very genre of the narrative does not even matter: matters of love find their place whenever signifiers structure a narrative. Of course in romance narratives love is the most central, but in these narratives love either ends up being idealized or ends up being analyzed. While both ways of framing love have their merits, the middle way often leads to forgettable narrative. Is Snow Flower, in the overabundance of love narratives, able to escape this middle way of mediocrity?

Miyuki Hirai (Ayami Nakajo) has been suffering from an illness ever since she was born. One day, she hears from the doctor that she only has one more year to life. The same day, she is victim of a purse-snatcher, but Yusuke Watabiki (Hiroomi Tosaka) is able to return the purse to the visibly distraught Miyuki.

Some time later, Miyuki recognizes Yusuke on the street and decides to follow him. By following him she learns that he works at a cafe and that that cafe will close in the near future, due to the debts of the cafe’s owner (Kenta Hamano). Miyuki decides to give Yusuke the money to pay of his boss’ debts. In exchange, he should become her boyfriend for one month.

Snow Flower, as a narrative, is simplistic and focuses, as romance movies generally do, on the development of the romantic relationship as such. Nevertheless, more than half of the narrative can be read as a fun and subtle investigation of the very superficiality of the societal images that form one’s image/expectations of how the ideal relationship and the ideal boyfriend should be – it is endearing to see how Miyuki directs Yusuke into her ideal boyfriend-image. While this investigation might have made for a great meditation of what constitutes the impact of an act-of-love, Hirokazu Okada quickly reverts to the safe haven of un-inventive and predictable J-romance narratives and crafts a narrative that is, at no point, able to evoke the power of the song it has used as inspiration.

While the best Japanese romantic narratives are able to induce some doubt concerning the (predictable) outcome of the narrative, Snow Flower fails to do that. While the best predictable romantic narratives are able to turn their predictable resolution into a moment akin to a catharsis, Snow Flower fails to do that. The main reason why Snow Flower fails to realize both aspects is that the romance between Miyuki and Yusuke is at no moment whatsoever sensibly felt. This is mainly due to the structure of the narrative, a structure hardly giving time to Ayami Nakajo and Hiromi Tosaka to communicate their chemistry (Acting note 1, Acting-note 2). The narrative spends too much time framing the  coming-into-being of Yusuke as Miyuki’s boyfriend, a coming-into-being that has to answer Miyuki’s ideals and realize her pure and innocent image of romance. And while Yusuke’s coming-into-being provides some truly fun and lighthearted moments, the narrative fails to sensible frame those subtle moments where the act/the lie are in fact the truth/the way he truly feels.

As this shift is not sensibly evoked, it should not surprise us that the conclusion of the narrative, a conclusion deriving its power from the above-mentioned shift, lacks the moving power it should have had. While it has to be applauded that Kojiro Hashimoto did not chose the easy route of evoking sentimentality, 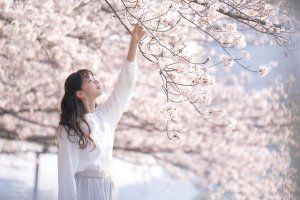 While one can still extract some enjoyment from Snow Flower, the narrative ultimately fails to evoke the warmth of love – the warmth of love abundantly present in the song that inspired the narrative – in a moving and truly heartwarming way. Yes, tears may fall at certain points, but there is no way that Snow Flower will ever be able to become a valued guilty pleasure for couples or individuals. Nevertheless, for those who remain eager to see a mesmerizing love narrative utilizing Finland’s poetic potential, we gladly recommend Julio Medem’s Los Amantos Del Circulo Polar (1999).

Acting-note 1: The chemistry between both leads is nevertheless beautifully framed on their trip to Finland, but it is not enough to make the finale truly moving and emotional.

Acting-Note 2: Contrary to the two main characters, Yumena Yanai, who portrays Yusuke’s sister, and the actor who plays Yusuke’s brother have a chemistry immediately sensible onscreen.