For some, Toshiya Fujita’s revenge film Lady Snowblood will inevitably be linked to Quentin Tarantino’s Kill Bill vol. 1, for which it was a major inspiration; Tarantino borrowed aspects of the narrative structure and the plot, used the song ‘The flower of carnage’ and let the cinematography inspire him (general note 1). And even though Lady Snowblood influenced Tarantino, it is surprising to find that the two Lady Snowblood movies have an anomalous character in Fujita’s oeuvre, as nothing he made, before or after, bears any stylistic resemblance to these movies. But, how anomalous these narratives may have been, what Fujita created with Lady Snowblood is nothing short of a cult classic.

The narrative of Lady Snowblood starts on a snowy evening at the beginning of the Meiji restoration (Gen-note 2, narra-note 1). In a dark prison in Tokyo, Sayo Kashima (Miyoko Akaza) gives birth to a child. Referring to the snowy day on which she was born, her mother names her Yuki and, in her dying moments, underlines her fate to exact revenge on those who raped her and who murdered her husband and Yuki’s big brother (narra-note 2, psycho-note 1). 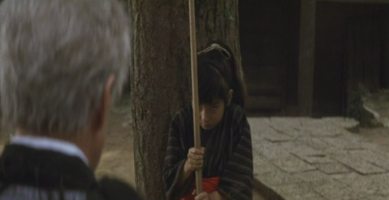 Besides being a straight forward revenge story centering on a strong female character, Lady Snowblood has diverse political dimensions that underpin the frame of the narrative. Set in the early Meiji period, a time of transition from a feudal system, i.e. the Tokugawa Bakufu, to a modern westernized Japan, the first sensible tension is the one between modernity and tradition. Throughout the narrative themes of corruption and exploitation evoke this tension, a tension that, in the end, will find its most apparent translation in the western style masquerade ball where the final showdown goes down. This tension should not be read as a statement to return to the tradition of old, as a more subtle, a more pressing commentary aligns with the first tension. Wrapped up in the guise of Western decadence, the narrative vocalizes a subtle leftist commentary on right-wing politics and imperialism. The last villain that plunges to his death, pulls down a Japanese flag with him. His blood taints it, his right-wing imperialism taints it.

Lady Snowblood‘s narrative puts the dimension of revenge and destiny into question – the dimension of destiny counteracting a reading of Shurayuki as the embodiment of female empowerment. Furthermore, the purpose of revenge is questioned as such, as the lack of a positive catharsis that follows the conclusion of Yuki’s revenge, confronts Yuki and the spectator with the emptiness that lies beyond.

Even though each actor performs great, it is Meiko Kaji that really steals the show. Her mesmerizing presence haunts every image of the narrative. Besides bringing the feral calmness and cool determination of Shurayuki, the ashura (demon) clad in a stylish kimono on her way to fulfill her destiny of taking revenge, memorably to life, she is also able to underline, using the phenomenal emotional subtlety of her facial expressions, Shurayuki’s compassionate side.

The episodically told narrative of Lady Snowblood – the convoluted plot of Kazuo Koike’s manga inventively condensed by Norio Osada, is approached with a refreshing creativity. The narrative travels smoothly across time in surprising ways (e.g. flashbacks within flashbacks) and incorporates frames of the original manga effortlessly. Furthermore, each important character is painted on the screen with a certain depth and personality.

The visuals in Lady Snowblood are utterly stylish and the careful attention that went into their composition is apparent – the cinematographer being Masaki Tamura. The camera, in general, moves through the narrative space with a raw fluidity, the occasional avant-gardish shot creating moments of decorative flourish. Each action scene, irrespective of their focus on Shuriyuki or the impact of her sword, is framed with an exhilarating elegance. 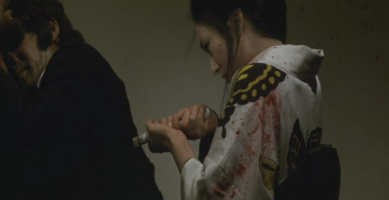 The interplay between red and white, as a sort of literal translation of the name Snowblood, is a recurring visual motif in the movie; the pure white of the snow providing the canvas for the painterly crimson red of the blood that gushes around in abundance.

Lady Snowblood proves to be an expressionistic cinematographed revenge tale, with powerful and stylish imagery that lingers in one’s mind. Lady Snowblood may not have any really impressive set pieces, but empowered by the mesmerizing performance of Meiko Kaji, Fujita artfully translated Koike’s true purpose to the screen: the creation of a strong, beautiful demonic woman who turns cutting down people, with her beautiful sword, into an art.

Gen-note 1: Lady Snowblood was not the only narrative from that period that served as an inspiration for Tarantino’s Kill Bill. The influence of Nuribumi Suzuki’s revenge/exploitation film Sex and Fury (1973) with the fabulous Reiko Ike in the lead, should also be apparent.

Gen-note 2: The translation of Shurayuki hime to lady snowblood is perfect as Shura refers to the site of a bloodbath, while Yuki means snow.

Narra-note 1: In the Japanese title one can also hear a reference to Ashuradō, one of the six Buddhist realms of existence where fighting demons are ever in turmoil.

Narra-note 2: The signifier “Shura no ko” Yuki’s mother uses for her child, can be translated as “child from/of shura”; shura either understood as referring to the bloodbath that started it all, or as Asura, by which the mother denotes herself, as the place (Ashuradō) from where Yuki, metaphorically, originates.

Psycho-note 1: In a way, the narrative underlines the impact of the signifier on one’s existence. On her dying bed, the last signifiers her mother gave her, shaped her total existence, her reason d’être.