“As the various secrets are slowly revealed, Harmonium vividly reveals how the inability of giving narrative to the trauma keeps a trauma alive and lingering. (…) [A Narrative] that (…) will long linger in the spectators mind”.

In less than a decade, Koij Fukada has proven to be one of the most innovative directors of Japan. While his first sociopolitical feature Hospitalité/Kantai only impressed domestic audiences for the most part, his second feature Hotori no Sakuko/Au revoir l’été (2013), meant a definitive international breakthrough, gathering many nominations and awards at international festivals. And then the biggest reward and confirmation of this talent until date came, when Harmonium, his latest cinematographical narrative, won the Jury-prize at the section “Un Certain Regard” in Cannes.

As almost every narrative Fukada has created became award-winning, it is more than time for Psycho-cinematography to review his latest cinematographical composition, Harmonium, which, according to the director himself, investigates the fundamental loneliness of each human subject. Does Harmonium provide the spectator with an enjoyable melody or are there some false notes to be experienced?[

[For people interested to buy the dvd in Belgium: Harmonium released by Imagine Film]

In a suburb of Tokyo, Toshio (Kanji Furutachi), a rather absent father, is living an uneventful life with his christian wife, Akie (Mariko Tsutsui) and daughter Hotaru (Momone Shinokawa), who learns to play the Harmonium. One day, Sotaro Yasaka (Tadanobu Asano), an old friend who just got our of prison, appears, asking him for a favour. Toshio accepts and gives Yasaka work and a place to life. Akie, who wasn’t involved in this decision, is unhappy with this decision, but begins to trust him once Yasaka appears to be more helpful and attentive to her needs than her husband. But Yasaka carries an important secret.

From the very start of the narrative it is apparent that Toshio’s family is dysfunctional. For Akie, who is mother for both her husband as daughter, and Hotaru, Toshio, the father, is just a presence devoid of any authority. Even if Toshio is a father on level of the real, the level of reproduction, he fails to realize his position as father on both the imaginary as the symbolic level. The act of inviting Yasaka in the house, an act that has impact on the entire family,

does not underline any authority Toshio might have, but rather how his wife, as subject, has no importance to him whatsoever. Furthermore, this act sensibly uncovers how problematic communication can become – the lack of eye-contact between Toshio and his wife and exchanges of speech fail to become true speech.

And then we have Yasaka, the enigmatic presence suddenly introduced in the narrative. His motivations eludes the spectator as much as Toshio’s presence and motivations does, giving both characters a certain unfathomable depth. But, contrary to the absent presence of Toshio, Yasaka becomes actively involved in the lives of Toshio’s wife and his daughter. And while he disposes some of the enigma he represents for Akie and the spectator by sharing some of his past with her, his enigmatic nature persists, remaining sensibly present, even in his absence.

Harmonium‘s main theme concerns secrets, the unsaid, and the effects the intricate web of secrets and their revelation have. While the uncovering of the secret, that Toshio and Yasaka share, enlightens some of the dark depths that both characters share – revealing Akie as ignorant, the making-present of this secret as such makes some psychological tension linger through the narrative. This tension is then, by way of a secret Yasaka alone keeps, joined with mystery surrounding Yasaka’s disappearance (Narra note 1).

Harmonium is framed with a cinematography that excels in simplicity. The slow tempo of the narrative finds it translation in the use of temporally long shots, which emphasize the speech and the comportment of each character. Fukada paints the washed-out coloured narrative world mostly with fixed camera viewpoints, while introducing subtle movement by inserting pan, tilt and dolly shots and slow zoom-ins. It is by virtue of this simplicity that Koji Fukada is able to create powerful compositions, often playing with symmetry. 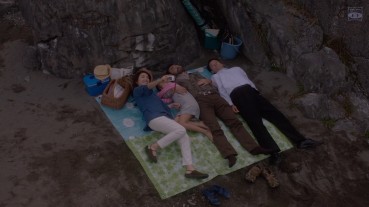 This play with symmetry is essential to the narrative as these symmetrical compositions carefully frame and uncover the asymmetries at the level of the relations (cine-note 1). Furthermore, the cinematography is characterized by a sudden shift, a shift introducing more handheld shakiness, a shift coinciding with the main twist of the narrative and the changes this twist causes in the relation between Akie and Toshio and in the emotionality of the narrative (narra-note 2, Psycho-note 1, Acting-note 1).

With Harmonium, Koji Fukada has created a chilling psychological narrative that, despite the somewhat subjective distant cinematography, provides insight in the effects trauma can have. As the various secrets are slowly revealed, Harmonium vividly reveals how the inability of giving narrative to the trauma keeps a trauma alive and lingering. Harmonium proves to be a narrative that, by virtue of various powerful shots, playing with symmetry, and its rejection of providing the spectator and Toshio and Akie any closure whatsoever, will long linger in the spectator’s mind, just like some melodies would.

Acting-Note 1:  The psychological dimension of the narrative, the complexity of Akie and Toshio, is beautifully brought to life by Mariko Tsutui and Kanji Furutachi.

Cine-note 1: One shot/scene that should be mentioned in this respect is the first dinner scene with Yasaka. This symmetrical composed shot gives the spectator the ability the slowly discover the differences between each character’s presence.

Narra-note 2: The incident gives Akie, even though she looses herself in the care for her daughter, and Toshio a common purpose to bond over. Whereas they were living alone together in the first part of the narrative, they appear, as a couple, a couple that communicates in the second part of the narrative. In this respect, it is not unimportant to underline that Toshio becomes some kind of a father for Takashi.

Psycho-note 1: Akie’s symptom – it really deserves the signifier symptom, of cleanliness, reveals the trauma the incident caused. The “don’t make you dress dirty” of eight years ago, has been fixated, structuring Akie’s life and care for Hotaru.