“An artful narrative that brings the problematic given of (assuming) one’s ego in the Other, the imaginary-symbolic discourse structuring reality, to the fore.”

The Yakuza genre, a specific subgenre of the more broad gangster genre, has spawned various cinematographical narratives that should be considered as true cinematographical classics. Any true fan of Yakuza cinematography knows exceptional narratives like Battles Without Honor and Humanity (1973), Seijun Suzuki’s Branded to Kill (1967), and Takashi Miike’s ichi the killer (2001) – of course I’m forgetting some.

And even Norifumi Suzuki’s artful Sex And Fury (1973), a movie from the famous Toei Pinky violence series, can be considered as a true yakuza classic – influencing Kill Bill (2003) for instance. With so much exceptional and diverse yakuza narratives already, can Tôru Kawashima’s  Ryuji (1983) be considered a true yakuza classic or should it better be forgotten in the depths of the Japanese underworld?

From the very intro of the narrative, it is obvious that Ryuji (1983) is not a narrative about the Yakuza in general, but nothing other than a subjective story of a yakuza, Ryuji. 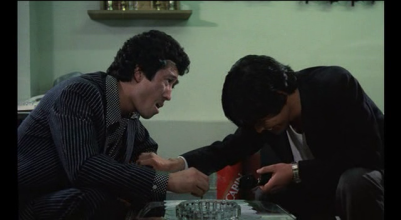 The dedication to stage his subjectivity, his struggle with past, the present and the future, is foremost revealed by the very structure of the narrative, i.e. which scenes that form and structure the narrative – scenes of Ryuji collecting protection money and overseeing gambling dens, are mixed with scenes of family happiness.

The attention that the narrative gives to daily interactions and the daily life – yakuza-related or not, has two important implications. Firstly, it paints an atmospheric picture of Tokyo and Kyushu in the eighties, a ‘modern’ Japanese cultural sphere where traces of traditional culture are still present. Secondly, by creating this backdrop, the character of Ryuji is able to come to full subjective fruition. And it’s in the very interplay between Tokyo, associated with Yakuza, and Kyushu, associated with family life, caused by the lingering shadow of death, that the main subjective question where the narrative revolves around is made so sensible. 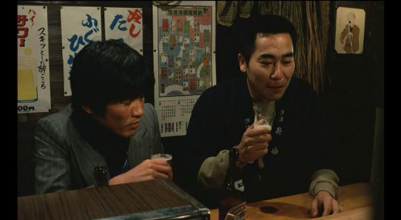 In more psychoanalytic terms we can say that Ryuji’s dilemma is function of two differentgazes, the gaze of the Other of the Yakuza and the gaze the Other of non-Yakuza. As Ryuji’s dilemma is foremost a dilemma between two different sets of symbolic coordinates, the question for Ryuji becomes by which set he wants himself to be signified by – In which reflection of the Other can he assume his ego the most. In this way Ryuji (1983), which is by no means an ordinary yakuza flick, reveals itself as a narrative that brings the problematic given of (assuming) one’s ego in the Other, the imaginary-symbolic discourse structuring reality, to the fore.

As Ryuji (1983) is a character driven narrative, the cinematography, dedicated to stage Ryuji’s subjectivity, stages for the most part speech-interactions. These interactions are mostly framed as such, but often one individual character –  Ryuji in most cases, is underlined – by way of positioning characters in the narrative space. This focus on characters is also evident in the use of ‘following’ shots, which in most cases single out the most relevant character in the scene, or the use of zoom-ins and moving-shots to emphasize facial expressions or other details.

The cinematography nevertheless introduces interesting variations on, what we can call, the base cinematography, which is characterized by steady framing, and the use of medium to long shots and following shots – creating a calm and rather aloof cinematography.

The first variation concerns the sparse use of a minor shakiness in shots to enforce the action. This is in contrast to those scenes where action is staged without ‘shakiness’, where action is framed and followed as it happens in the narrative space – putting the focus on the space and the action itself. Because aggressive interaction is ever framed at a safe ‘distance’ and in a space characterized by the noise of silence, the impact of the aggression (e.g. the aggressive outburst of Ryuji) on everyone concerned is sensible for the viewer. As a matter of fact, the background silence that structures the entire narrative, is the element that enables speech and gestures to evoke emotionality, subjectivity, and Ryuji’s dilemma.

A second variation concerns the sound or rather the complete lack of sound. This lack is

sometimes used to reveal scenes as being in the past and visualize their connection with the current narrative timeline. The transitioning to the visualization of memories is often signaled by way of internalized speech. In another case the lack of sound underlines the emotional importance of a scene, while enabling the introduction of the following scene through the use of overlapping speech 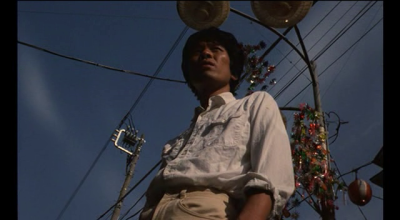 It’s by way of this interplay that this narrative, masterfully directed by Tôru Kawashima, deserves to be categorized as a true yakuza classic. But it only accedes to this status, because it exceeds the confines of the yakuza genre by touching upon the fundamental problematic condition of the human subject. Ryuji is not so much a story about a Yakuza, but a story about a subject finding its place as ego, knowing very well that his ego can never fit the gaze of the Other.