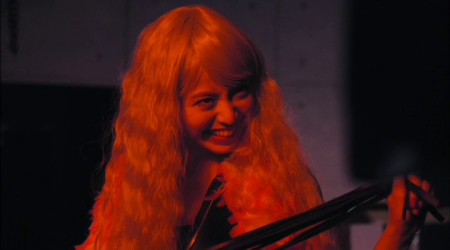 The central dilemma reveals that the main story-line is not so much about the gang of foes that want to take over the school, but about the relation between Kyosuke, Aiko and (used) underwear. The narrative is about how those three aspects (Kyosuke with Aiko, Kyosuke with underwear, Kyosuke/underwear with Aiko) can have any relation with each other whatsoever. The plot about the gang of foes is, in fact, nothing more than a wafer-thin narrative device to enable Yûichi Fukuda to explore if a relationship between Aiko and Kyosuke is possible and touch upon the possibility of love to make a certain sexual perversity acceptable. 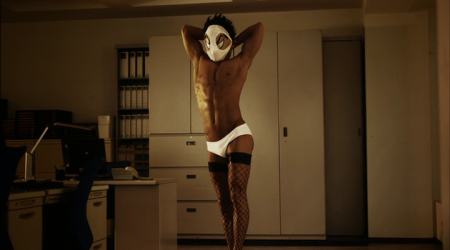 Speech is used in a rather special way in Hentai Kamen. More specifically, besides the normal conversational use, speech is used in three different ways. Speech as inner monologue, which is mostly applied in the beginning of the narrative, is used to give the viewer the coordinates of Kyosuke’s subjective position. This second way Kyosuke’s speech is used is as a narrator, by which he further explains who he is. The third way, and this way is used abundantly to stage Kyosuke’s dilemma, is the externalization of inner monologue; the voicing out loud of Kyosuke’s line of thought in the narrative reality – in the end we even get a externalized inner dialogue between Kyosuke and his alter-ego.