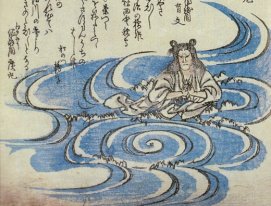 First of all, the power of the writer to touch a subject with his writing. Second, the receptivity of the subject to be touched by the writing of a writer. Third, the possibility of a connection between that particular writer and that particular subject who reads his writings. These three interdependent things enables us to point to the fact that words have effects.

I should however be noted that the connection between writer and reader doesn’t mean that the reader knows or understands the intention of the writer. This connection is thus in no way a reference to the intentional fallacy, which is “the mistake of attempting to interpret a literary text by appealing to the supposed intentions of its author (Bennet and Royle, 2004, p. 292)”. The connection we’re speaking of only entails the ability of the writer to hook the reader to his writings.

Psychoanalytically we could say that writers – not all of them off course; James Joyce is often seen as an exception – or the writings they produce bear the potential to touch one’s unconscious (note 1).  This is an entirely subjective and particular effect – the when, why, what differs for everybody. This effect reveals the unerasable subjective implication of the reader.

If we research a given author and his writings, we need to treat this subjective implication as a potential danger, a potential interference or blind spot – even though this implication is always (implicitly) present. We face the danger of finding ourselves, our own subjective implication, in these writings, instead of the writers implication (note 2) – if it’s the writers implication we want to research (note 3). Instead of inquiring into the more general repercussions related to the writer, we would – if we were to ignore this danger –  inquire primarily into the repercussions related to our own subjectivity structure.

(This small commentary is also available on the page writers/poets.)

Note 1: Can a text or a sentence have any other effects than touching upon one’s unconscious? We could say – as a hypothesis – that a text/sentence has at least two different kinds of feasible effects. The first effect is the effect of touching one’s subconscious – a variety of effects on the subject are possible. The second effect is no effect, which can be caused by the writer, the reader, or the lack of connection between writer and reader.

Note 2: The writers implication is in no way a synonym for his authorial intention. ” ‘Conscious intention’ (…) can always be considered as subject to the unconscious workings of the mind. With psychoanalysis, it is no longer possible simply to privilege consciousness as the sombre judge of what is intended” (Bennet & Royle, 2004, p. 21).

Note 3: Even if the writers implication in his own writings isn’t the main concern of the study, the danger of our own subjective implication as a blind spot remains present.

Picture 1: The first illustration appeared in the Kyōka Hyaku Monogatari (狂歌百物語), a kyōka e-hon published in 1853. The theme of this Kyōka concerns yōkai. It was edited by Rōjin Tenmei, and illustrated by Ryūkansai (Masasumi Ryūkansaijin). The picture shows Hashihime, the maiden of the bridge.  She’s a woman who spends lonely nights waiting for her lover to visit, but she becomes – because of his infidelity – a fierce “oni” or demon fueled by jealousy.

Picture 2: The second picture concern two calligraphy pages from the Tale of Genji, a classic work written by Murasaki Shikibu, a noblewoman and lady-in-waiting, in the early years of the 11th century, around the peak of the Heian period.