Ever since their childhood, Takuya Dairiki and Takashi Miura have been making films together. Their films, always highly experimental in nature, received screenings around the world, and in 2008, at the Image Forum Film Festival, they secured, with their short-film Nikotoko Island (2008), their first big award. With Kinta And Ginji (2019), they present another highly experimental film.

Kinta, a raccoon, and Ginji, a vintage robot, are friends. Every other day, they meet up and spends they day together. They roam the fields and forests, while having conversations about a variety of mundane things. Sometimes, other entities, like buildings, chime in to provide commentary on our two unlikely friends or to talk about themselves.

Kinta and Ginji may be the first cinematographic narrative that takes the notions of mundanity and superficiality so far. While Kinta and Ginji’s conversations touch upon many things (and delineate their radical subjective differences), their conversations remain, psychoanalytically speaking, at the level of the imaginary. At no point, Kinta or Ginji show any interest in each other as subject.

Yet, despite evading each other as subject, Kinta and Ginji keep talking. They talk about the mundane problems they have (e.g. like how to solve Kinta’s dislike of climbing down tree), they share their subjective realizations as well the things they do not understand about themselves. At one point in the narrative, Ginji realizes that he does not love fishing because he likes catching fish, but because he likes watching the wet stones dry in the sun. But while he is sure about enjoying seeing wet stones slowly dry up, he does not know why it makes him feel so great. 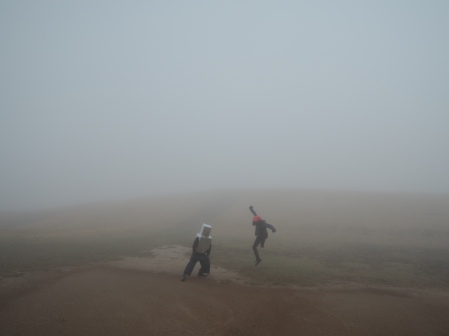 Their conversations also touch upon the cyclic evolution of the activities they find pleasure in – Ginji, for instance, becomes tired of wetting stones and, in search for some pleasure, discovers the joy of polishing stones, only to re-find, after polishing becomes boring, the enjoyment in wetting stones again. Moreover, interacting with each other allows them to reminisce about the past, to indulge in some superficial philosophizing (e.g. about meaning, about the end of the world, …), and to quarrel with each other (e.g. like when Ginji calls the cap Kinta gave his father ‘uncool’.)

As the interactions between Kinta and Ginji accumulate, a certain senselessness becomes palpable. There is, in fact, so one comes to realize, no real purpose to their conversations; they meet and talk every other day, they became friends, because they have time.

What Kinta and Ginji’s mundane conversations also reveal is that both Kinta and Ginji are marked by a certain subjective emptiness and that both are devoid of any desire. Even though they lack a desire, it does become apparent, throughout the conversations, that both are content with finding pleasure in simple mundane things (e.g. tree-climbing, rock-watching, …etc.). It is therefore not a radical interpretation to state that the meetings of Kinta and Ginji are, while not always that apparent, another way for both to attain some mundane pleasure.

The pleasure of interacting with each other – a pleasure possible without having to take the other as subject into account – is what gravitates them towards each other and enforces their friendship. It is this pleasure, as found within their conversations and their solitary activities, that ultimately allows Kinta and Ginji to avoid the confrontation with their own subjective emptiness and their lack of desire. Put in this way, Kinta and Ginji can be understood as being emblematic for the kind of youth our pleasure-based capitalistic society is able to produce.

Kinta And Ginji is composed with a concatenation of temporally long static shots, alternating between atmospheric shots of nature and shots of our duo (within the forest, on the fields, … etc.). Due to this visual minimalism, it might be more correct to state that the film’s cinematography acts as a visual support for the concatenation of conversations. Despite a variety of atmospheric nature shots in the cinematographical composition, nothing really happening at the visual level.

While this visual minimalism forces the spectator to focus on the conversations between the two radically different subjects, the same simplicity might also confuse some spectators about who exactly is speaking – Kinta or Ginji? Due to the lack of visual ques for speech – no moving mouths nor clear nonverbal elements of communication, the spectator is only able to discern the speaker by listening to the difference in voice and the content of the conversations.

The lack of visual cues for speech also has another effect. This lack, in fact, creates an ever-sensible distance between the vocal exchanges and the minimal ‘interactions’ we see between them on screen. The sensibility of this distance is the sole reason why Kinta and Ginji is such an estranging experience. To put it differently, if Miura and Dairiki’s narrative is an estranging experience it is because the conversations the spectator hears are not embodied by the characters he sees.

If one would be asked to sell Kinta and Ginji to an audience, one can only fail. Dairiki’s and Miura’s exploration of a friendship between a robot and a raccoon is as absurd as it is estranging. Yet, despite the absurdity, the concatenation of mundane conversations does offer the spectator a confrontation with the kind of subjective ravage our pleasure-based capitalistic society is able to produce. If you love experimental cinema, this comedy of mundanity is really worth to check out.