To say that One Piece is popular might be an understatement. Having sold 454 million copies worldwide, One Piece is the undisputed king of manga. That such popularity led to the production of a long running anime series, light novels, movies and a variety of video games should this not surprise anyone.

One Piece: Stampede, the fourteenth feature film, was made in order to celebrate the 20th anniversary of the One Piece anime.

In 1,000 theater locations across the U.S. and Canada. Check local listings: http://funimationfilms/onepiece

One day, the Straw Hat Pirates and their captain Monkey D. Luffy (Mayumi Tanaka) are invited by Captian Buona Festa (Yūsuke Santamaria), a big-time pirate thought to have died in a Sea King accident, to join the Pirates Fest. While there are a lot of activities to do at the fest, Monkey D. Luffy, Ussop (Kappei Yamaguchi) and, Tony Tony Chopper (Ikue Ōtani) , are only looking forward to the treasure-hunt related to the deceased pirate king Gol D. Roger (Masane Tsukayama).

Of course, such an event does not go unnoticed by the marines, the World Government’s military sea force. In order to apprehend the festival master Festa and Douglas Bullet (Tsutomu Isobe), Vice Admiral Smoker (Mahito Ōba) and captain Tashigi (Junko Noda) have infiltrated the festival.

Suddenly, Trafalgar D. Water Law (Hiroshi Kamiya), captain of Heart Pirates, appears from the Thousand Sunny’s cabin. Wounded, he advices Monkey D. Luffy to leave this island immediately as Festa and Douglas Bullet are plotting something bad, something that would turn the island into a warzone. But Monkey D. Luffy, not afraid of the extra challenge, decides to split his team: one team will, together with Tra-kun, investigate the true intentions behind the festival and the other, led by Luffy, will participate in the treasure hunt.

While narrative of One Piece: Stampede is not hard to follow – as the main plot elements are well introduced, the abundance of characters will overwhelm those that are not familiar with the franchise. Nevertheless those who are familiar with One Piece know what to except: an absurd crazy action-packed pirate comedy. By inventing an event that allows a wide array of iconic characters, like Buggy the Star Clown (Shigure Chiba) and admiral Fujitora (Ikuya Sawaki), to be featured and (thus) a wide range of crazy superpowers – each more pleasingly silly than the one before – to be visualized, Atsuhiro Tomioka and Takashi Otsuka succeeded in crafting a very enjoyable and visual rich tapestry of utter craziness.

Of course, One Piece: Stampede is not only a comedy-narrative. By introducing a pleasing (and visually impressive) power-hungry foe to beat, a foe that (logically) will test the abilities of our heroes, the narrative infuses some sensible tension into the narrative’s unfolding. While we know from the start that Luffy will overcome this mighty foe, the narrative is successful in keeping the spectator on the edge of his seat until the final super-powered punch. 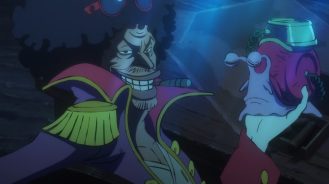 It is through the confrontation of Luffy with Bullet that the underlying theme of friendship and loyalty is brought into play. What fires Monkey D. Luffy up, what motivates him to beat this foe, is Douglas bullet’s statement that ‘friends are a weakness’ – a statement that goes radically against the importance friends have for Luffy. Monkey D. Luffy’s strength does thus not only come from his desire to become the Kind of Pirates but also, as is clearly implied by the narrative, from his will to protect those that he holds dear. On another level, we can translate this opposition as an opposition between selfishness and self-indulgence, a position beyond any kind of true social bond, and the power that resides in having found a place within a structure of friendship. Put in this way, one can argue that Monkey D. Luffy fights for the social bond as such because he understand the importance it has for the subject.

Of course, one should not except One Piece: Stampede to provide a deep and challenging exploration of this notion of friendship. It is a shonen-narrative through and through: its main aim is to entertain.

Because the narrative’s main focus is to entertain the spectator, it’s not unsurprising to see that Once Piece: Stampede does not aim to offer anything new at the level of the visual or at the level of animation. That being said, One Piece Stampede does succeed in entertaining us. This is not only due to the (often subtle) visual comedy, the ever comically charged animation, and the quirky shot-compositions, but also due to pleasing but ever quirky action-sequences. In other words, the narrative does not need any true elaborate animation as the visual swash-buckling quirkiness that fills the frame is already captivating as such. That One Piece Stampede does accomplish to impress with some visual sequences, like the final transformation of Douglas Bullet into a monumental giant, is icing on the cake.

While the animation in the movie is only slightly better than the animation in the anime, the overall look of the visuals, due to a better lightning design, is (visibly) more refined. The impact of the lightning design on the feel of One Piece Stampede might be subtle in day-time scenes, it becomes really sensible in more darker sequences, for instance night-time sequences. This design also empowers the dark reddish atmosphere that coincides with Douglas Bullet’s final transformation.

At certain points in the narrative, the animation is supported by the inclusion of 3D CG animation. While it is obvious that the first reason for including such models, like pirate ships (e.g. Monkey D. Luffy’s ship) and the models to animate large crowds, is to cut costs, these moments never disturb the overall feel/look the narrative wants to evoke. One model that is seamlessly integrated into the framed visual space is the final form of Douglas Bullet (Cine-note 1). This integration shows in a beautiful way how common animation and 3d cg animation can complement each other.

While One Piece Stampede will not win any prizes for originality or artful visual, it executes every element the Shonen-genre has to offer perfectly. The narrative, which does not neglect to evoke that strength resides in friendship/being together, is a pure unadulterated mix of quirky comedy and crazy swashbuckling action. If you crave a narrative that, in Martin Scorsese’s words, only amounts to being a theme-park ride delivering thrills, One Piece: Stampede perfectly fits that description.

Cine-note 1: This integration is seamless because of the dark reddish colour-schemes and the abundance of smoke that surrounds his final form.