While Umi Ishihara’s selection in the Bright Future category of the IFFR might surprise some people, it might not be a big surprise for those people familiar with her former artistic work. In fact, as her art-movies and art installation, which have been featured all over the world, center around love, one should see her debut feature The Garden Apartment not as a break with, but as a logical evolution of her oeuvre.

While the relationship between Hikari (Yukari Shinomiya), who is pregnant, and her boyfriend Taro (Yu Suzumura) seems fine on the surface, the failure to attain a steady income since graduation has not failed to impact their relationship. One day, while going out for breakfast with her boyfriend, Hikari has a change encounter with Kyoko (Kaori Takeshita), Taro’s somewhat eccentric aunt. Appalled from the fact that Kyoko has no clue who she is, she subtly emphasizes her importance by asking Taro about his outstanding debt. Startled by Kyoko’s intrusion,

Hikari follows Kyoko to demand an explanation. But instead of explaining herself, Kyoko seductively invites Hikari to visit her at her place.

The Garden Apartment is as much about femaleness as it is about that strange little thing called love. In truth, it is only through the framing of the meeting of two forms of femaleness, that the narrative is able to evoke some truth about love, the central aspect of a neurotics life. Represented by Hikari – a signifier that denotes light, we have an angelic femaleness marked by naivety and innocence and, through Kyoko, we are introduced to a femaleness marked by seductive eroticism. But Kyoko’s femaleness is a problematic one. Her subjectivity is marked by a problematic enjoyment, an enjoyment directly in function of the lack that marks her. In other words, Kyoko’s acts and speech have to be read as expressing her lack (Narra-note 1).

The meditation on love is only realized through the character of Sekai (Kiyoshiro Ishida), who is, like the five girls allowed to live in Kyoko’s house. It is not so much his presence that causes this meditation, as it is his sudden disappearance – his running away with Hikari into the world he as signifier

represent, that reveals, in light of that one element love, Kyoko’s fragile subjectivity – as marked by separation anxiety – and instigates Hikari’s path to subjective understanding (Narra-note 3).

So while one can say that it is the meeting with Kyoko, this strange element, that heightens Hikari’s doubt about Taro, it is Hikari’s entering into the garden apartment, an apartment as marked by enjoyment, that instigates her departure from her angelic being (Narra-note 2). But while it is clear that this adventure is an allegory – from the under-world, i.e. the garden apartment, back to the world of the living – Ishihara has, in our view, missed the change to make Hikari’s adventure even more moving. The only element that truly hints to her development, are those shots where Hikari, who changed into some more daring lingerie, comes to mirror Kyoko (Narra-note 4).

But while the aforementioned passage lacks some impact, Ishihara does not fail to conclude her narrative with a compelling and emotionally moving ending. Moreover, The Garden Apartment constitutes an effective play with the associative power of the signifier. It is only by association that the true meditation on love is able to come to the fore. Ishihara evokes the very insecurity love as signifier induces. 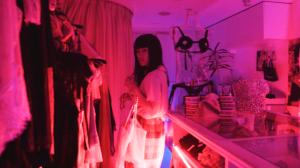 As there is no final signifier, be it as act or as speech-act, that proves another person’s love, love is always subject to insecurity, especially when the real, be it as death or as adultery, intrudes. In other words, the presence of love is always dangerous, as it is fundamentally marked by its possible absence.

The cinematography of The Garden Apartment is noteworthy for its simplicity. The narrative is mostly composed by mixing semi-fixed, ‘crudely’ following, or subtly moving shots. As shots are often temporally long, they often involve internal shifts, e.g. from semi-fixation to following movement or from following movement to semi-fixation (Cine-note 1). Moreover, as the concatenation of shots unfold, one cannot fail to notice Ishihara’s talent for crafting visually strong shots. Another aspect that stands out in the framing of The Garden Apartment is the way colour is applied. Colour as such is truly exploited to craft a visual appealing and atmospheric narrative space. But colour is not only used to define narratives spaces, but also the two heroines as such. Hikari’s innocence is subtly empowered by the colour white, while Kyoko’s emotionality is, in contrast, evoked by associating her with with various reds (Narra-note 4).

While there is some unevenness to be noted in some of the performances, there are two minor and one major highlights to be noted among the perfomances. The two minor highlight concern Yukari Shinomiya and Yu Suzumura. While the former is successful in communicating the endearing innocence of Hikari, the latter is able to sensibly evoke the neurotic separation

anxiety that marks his character. The major highlight of the narrative is no-one other than Kaori Takeshita as Kyoko. Her melodramatic acting – acting that truly evokes the problematic nature of her subject – is wonderful and compelling.

When all is said and done, Ishihara’s talent as director and screenwriter is evident. Despite this fact, we are nevertheless left with a feeling that Ishihara, maybe due to budget constraints, was not able to fully realize her creative vision. This is for instance sensible in the implementation of electronic music into the framing of the narrative space. While these musical pieces do not fail to evoke a detached and dreamy atmosphere, we do feel that a better sound-design would have increased the power of The Garden Apartment‘s visual and musical blend.

While The Garden Apartment could have benefited from more poetics, more drama and a better sound-design, Ishihara has nevertheless succeeded, by exploiting the associative power of the signifier, in crafting a beautiful meditation on the dangerous nature of love. If we would be able to give one advice to Umi Ishihara, it would be the following: Exploit your talent! Become more experimental.

Narra-note 1: It is also important to note that the party space, full of plants, as such acts as an expression of her lack – the lack of her beloved husband. Furthermore, the five girls living together with her are nothing but “mothered” by her.

Narra-note 2: It is especially in light of the unborn child, as an element that will turn the dyad into a triad, that Taro’s function – his subjective conduct within the context of the relationship – is put into question, both at the level of responsibility and financial support.

Narra-note 3: Note that Taro is marked by separation anxiety as well.

Narra-note 4: Hikari’s mirroring reveals, in our view, the very danger for Hikari is to be hurt and to be marked by a real lack like Kyoko. The danger is not in a lack of love but in loving someone too much.

Note that Kyoko also wears white, but it is ever in contrast with her red lingerie.

Cine-note 1: The cinematography, while decent in supporting the framing of the atmosphere, is often a bit rough around the edges. In two or three instances, the flow between shots feels strange because of the cut that separates them..