While Isao Yukisada already proved his talent in framing youth-narratives with the award-winning Go (2001) and Crying Out Love in the Center of the World (2004) – both adapted from novels, Yukisada never adapted a manga to the silver screen. But now, with River’s Edge, Yukisada, long-time fan of Kyoko Okazaki, the author of the manga, makes a personally motivated exception.

One day, Haruna Wakakusa (Fumi Nikaido) sets out to look for Ichiro Yamada (Ryo Yoshizawa), a student who is bullied. She ultimately finds him naked and tied-up in an abandoned building. The person responsible for this cruel act is no one other than her “boyfriend” Kannonzaki (Shuhei Uesugi). After another rescue by Haruna, Ichiro invites her to share two secrets with her, he’s actually gay, even though he has a girlfriend, Kanna (Aoi Morikawa), and a year ago he found a dead body along the edge of the river. The only other person who knows of this body is Kozue Yoshikawa (Sumire), a bulimic model. 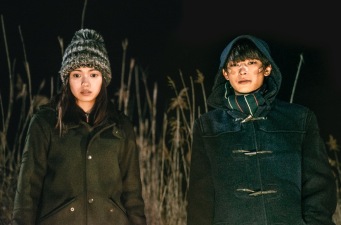 As a narrative, River’s Edge aims to explore the complexity of adolescent psychological functioning, i.e. the external problems and the inner problems their coming-into-being as adults confronts them with. And while this causes a the narrative to present a myriad of problematic situations and various surprising plot-twists in one time-limited narrative space, it is by virtue of this dramatic abundance that an insight, albeit in a dramatized way, in the rather complex lives of high-school students is given. 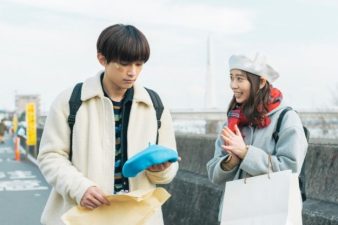 What is amazing about River’s Edge is that the narrative is devoid of any romanticism. In every scene Isao Yukisada aims to brings the crude reality of the complexity of coming-into-being as adult to the fore. As violence is rather explicitly shown, sexuality realistically framed, the sexual register of the oral drive subtle underlined,… etc., one quickly realizes that the crude things in life, those things that could have been part of your adolescence, are being framed in a straight-forward and no-nonsense manner.

One of the sequences that corroborates Yukisada’s pre-occupation with the crude reality of adolescence is the fabulous juxtaposition of Ichiro’s revelation of the dead body and Kannonzaki’s sexual encounter, a sequence evoking life and death in an associative way – la petite mort of Kannonzaki included. Later, in the narrative, two rather Freudian image-concatenations evoke the sexuality of the oral drive in precise fashion. The first association is when Kozue watches Kannozaki’s second sexual encounter while eating a small thin sausage. These various associations delineate in a subtle manner the true theme of the narrative: How to organize a life between death and sexuality. 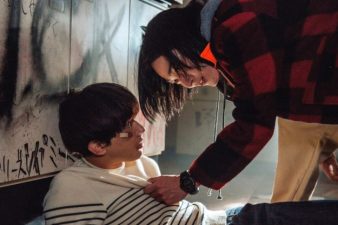 The distinct interview segments – segments that reveal the strength of each performance and especially Fumi Nakaido’s – explore various characters and heightens the crude realism Isao Yukisada aims to frame (Narra-note 1). And while it introduces most characters to the spectator, delineating their social positions, it often touches upon the subtle difference between their tatamae (social face)  and their hidden honne (true feelings). Of course, as one can except, the narrative puts the emphasis on revealing some of our student’s honne as they are in the process of growing-up.

The cinematography of River’s Edge further underlines the realism Yukisada aims to frame, as the framing of the narrative feel natural and often documentary-like. While fixed shots are present, they are still reduced to a minimum (Cine-note 1, Cine-note 2). Most of the shots in the narrative are marked by a certain movement, be it a subtle or fast trembling movement, a fluid following one, or just a fluid exploration of the narrative space. Even in scenes where movement is minimal, shots have the tendency, by a subtle following movement, to underline those minimal movements. 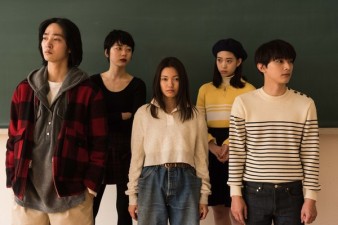 Besides giving the entire framing of the narrative space a crude and natural feel, the cinematography quickly introduces Haruna as the main subject and orientation point of the narrative – the rare use of a subjective shot further corroborates this. Nevertheless, River’s Edge, with Haruna remaining at its center, should be experienced as an ensemble-like narrative, focusing on the intermingled lives of various high-school students as they grow up in the nineties (Sound-note 1).

As a certain naturalism characterizes the framing of the narrative space, it should not surprise the spectator that the music – consisting of violin, guitar and/or piano sounds – is rather simplistic, highlight certain aspects of our characters’ subjectivity, while enforcing the rather depressing atmosphere.

River’s Edge is a rather ambitious project that succeeds in evoking the complexity of adolescence in a crude, unflattering and straightforward way. And while the narrative of River’s Edge is somewhat depressing – romanticists stay away – it beautifully forces the spectator to confront the fundamental dimensions of life: how we, as subject, position ourselves in relation to life and death, and how to entangle sexuality in our short period of subjectivity on earth.

Cine-note 1: When highlighting the more material aspects of the narrative, e.g. the river’s edge, or when the living environment of the character is of equal importance, fixed shots are applied.

Other exceptions are shots focusing on the door of the classroom, and the shots with a door-like frame (i.e. Kozue in the hospital room of the school).

Cine-note 2:  A second reason for using fixed shots is to underline surprise of a certain character, e.g. when Haruna discovers a student feeding food to kittens, when Ichiro shows Haruna the dead body. Other emotions are sometimes underlined with fixed shots as well.

Narra-note 1: In her interview segment, it should be clear that Kozue is showing her honne about her ego-image. [Note the fixed shots in this sequence].

Sound-note 1: The voice-over – Wakakusa as narrating voice – puts Wakakusa’s subjectivity as the main orienting element of the narrative development.