“An extremely enjoyable romantic-comedy, due to the amazing chemistry between the two leads. In short, if you are a romantic soul, this narrative will surely be a moving experience.”

Takashi Yamazaki, know from narratives like Eternal Zero (2013) and Parasite (2014, 2015), is not unfamiliar with Ryohei Saigan’s work as mangaka. In fact, “Destiny: Tale of Kamakura” is his fourth movie based on the narratives Saigan invented. And while Ryohei Saigan is a well-known artist in Japan, he is, strange as it may be, a forgotten master in the west. For many, this movie will be their first encounter with Saigan’s imagination. For Japan cinema enthusiast, it will be a re-meeting with Yamazaki’s directorial talent and qualities as special effects director (General-note 1).

When young Akiko (Mitsuki Takahata) marries mystery author Masakazu Isshiki (Masato Sakai), she has no idea that her daily life at Kamakura will become everything but normal and mundane. One day, the safe mundanity she thought she was settling in is put into question by a passing water-imp. At first afraid, the following confrontations with a variety of magical creatures quickly turns her life into a constant source of wonder, revealing Kamakura as a place where humans and non-humans live side-by-side, seemingly in harmony (Narra-note 1). Nevertheless, danger lurks around the corner, ultimately leading to Akiko’s disappearance. Is Isshiki able to save her life?

Destiny: Tale of Kamakura has no plot-development and no dramatic build-up in the traditional sense of the word. Instead, the episodic nature, obviously resembling the structure of a manga, puts the emphasis on relationship of the newlyweds in a slice-of-life kind of way (Narra-note 2). 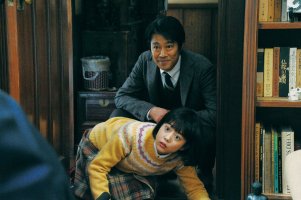 This is not to say that there is no continuity to the narrative, but the episodic structure remains ever sensible. Continuity is luckily provided as the episodes introduce various small plot-details that nicely come together in the episodic-finale of the narrative.

As the newlyweds forms the central focus of the narrative, it comes as no surprise that the narrative concerns genuine love. But as the magnificent finale of Destiny: Tale of Kamakura shows, the love in question is nevertheless an idealized one (Society-note 1). Furthermore, one can read in Akiko’s position a subtle plea for less prejudice towards the foreign. With her open, accepting and ever friendly position, she breaks the ‘invisible’ barrier that obviously still exists between the non-humans and the humans. In this way, Takashi Yamazaki is able to infuse this light-hearted fantastical narrative with a subtle form of social criticism (Narra-note 3). 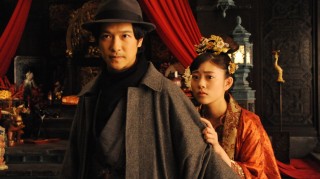 The focus on the newlyweds is also evident in the cinematography. While Destiny mingles, as most movies do, fixed shots and moving shots, each kind of shot serves its purpose (Cine-note 1). The fixed shots are fundamental in enabling the chemistry between our two leads define the atmosphere and touch the spectator. The timely moving shots – shots that mainly follow Isshiki and to, a lesser degree, Akiko – are instrumental in establishing Isshiki as main point of reference, while subtly eliciting heartfelt sympathy from the spectator for this couple (Cine-note 2, Cine-note 3).

The special effects do what they need to do. While they do not frame the other side of Kamakura and the other-world in a realistic way,

they do elevate the fantastical nature of the narrative space in a believable way. In other words, the harmonious integration of the special effects enables the spectator to experience the fantastical Kamakura and the netherworld as a plausible space.

The wondrous and magical nature of the narrative is beautifully underlined by the musical score. Even though the cinematography subtly favours Isshiki’s viewpoint, the musical score empowering the revelation of the wonders of Kamakura and the other-world favours a character according to the needs of the narrative – first mirroring/communicating Akiko’s entrance into this magical world, then mirroring Isshiki’s amazement as he ventures into his mesmerizing other-world. Additionally, the versatility of musical score is successful in turning the more emotional moments into truly touching vignettes.

As such, the fantastical Destiny is also able to satisfy the more romantic souls among us.

As the focus of the narrative concerns the newlyweds as such, much of the spectator’s enjoyment depends on the chemistry the two leads have. Luckily, both Masato Sakai and Mitsuki Takahata deliver. Their individual acting performances are great (acting-note 1). The chemistry they have quickly fills the narrative space with a heartwarming charm, producing many endearing and funny moments.

Destiny: Tale of Kamakura is great. The fantasy setting works and is brought to life in a believable way. As a matter of fact, the setting works so well that it slightly disappointing to see that Kamakura is underused in the middle part of the narrative. Luckily, the visually impressive finale more than makes up for it. Destiny is also an extremely enjoyable romantic-comedy, due to the amazing chemistry between the two leads. In short, if you are a romantic soul, Destiny will surely be a moving experience. As the credits roll, you’ll want to hug your girlfriend while hoping that something like destiny truly exists.

General note 1: The original review was first published on Asian Movie Pulses:  https://asianmoviepulse.com/2018/05/destiny-tale-of-kamakura-2017-by-takashi-yamazaki/ . This review is slightly adjusted and various notes have been added/

Cine-note 1: Shaky framing is used as well, but only to separate the visualization of the past from the present.

Cine-note  2: The timely moving shots are great to establish the mesmerizing beauty of the narrative space called Kamakura.

Cine-note 3: In some rare instances, moving shots are also applied for other characters.

Colour-note 1: The sepia-tint that characterized the framing of the narrative space, gives this space a warm and slightly nostalgic feeling.

Narra-note 1: We use the signifier ‘seemingly’ as there still remains a distance between non-humans and humans in the narrative space of Kamakura.

Narra-note 2: It is funny to note that Isshiki and Akiko never kiss in the narrative. Nevertheless, their love is primarily communicated by entering each other’s personal and physical boundaries.

Society-note 1: In light of Japanese society, where more and more people remain single, this kind of unrealistic visualized love is the kind of love that, while desired, is deemed impossible to attain in contemporary society.

Narra-note 3: Even though we do not know to which extent this subtle social criticism is present Ryohei Saigan’s Kamakura Monogatari, we assume that, if the narrative sticks close to the source material, this subtle criticism was already present in the manga itself.

Acting-note 1: Mitsuki is perfect in her role as the slightly childish, naive newlywed wife trying her best to become a dependable housewife. Her kawaii-ness/cuteness oozes from the screen.