“[With] nature as a lingering presence of beauty throughout the narrative, [Kaneko’s subtle narrative twist] turns [the narrative] into a subtle deeper meditation for more Omoiyari no aru.”

Mt. Fuji, Japan’s sacred mountain, endlessly framed throughout the years in Japanese cinematography – even in Eiji Uchida‘s Love and Other Cults. And while it is and will always be an impressive mountain, Japan features more hidden and often sacred sites of natural beauty waiting to be excavated for their cinematographical potential. Masakuza Kaneko’s second feature film The Albino’s Trees is, in this respect, one of the first cinematographical narrative tapping into that potential.

One day, Yuku Kusakabe (Ryohei Matsuoka) and Imamori (Shuichiro Masuda), both hunters working for an animal control company, are informed by their boss Nemoto (Hiroyuki Matsukage) of a lucrative contract to kill an animal in a remote region in central Japan. Yuku is reluctant, but when his sister Izumi (Kinuo Yamada) underlines the urgent need for money so their mother (Mari Matsunaga) can be operated, Yuku sees no other choice than to accept.

Before travelling to the ridge of mountain Yorigi, both Yuku and Imamori are invited by Aya (Ai Ozaki), who works at the town-hall, to stay the night. Her grandmother Chitose (Chie Yamaguchi), who was born in Yorigi, a semi isolated old-style village near the mine that provided prosperity for the city, talks about the white deer god, the spirit of the trees of the mountains. The day after, they hear from Hiura (Hatsunori Hasegawa) that they have to kill the albino deer, still venerated in Yorigi, whose existence threatens the farming economy of the neighbouring town. 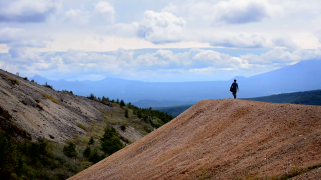 The Albino’s Trees, as a narrative, is straightforward and simple: it concerns the conflict between modern and traditional, the importance of economy and a philosophy of living in harmony with nature. The speech of both Yuku’s boss Nemoto as well as the town official reveal a narrow vision on nature, in which nature is subservient to economy. Nemoto boasts about the income this business of animal control (i.e. killing vermin) yields, while the town official is afraid that the rumour of mineral contamination in the mountains will damage the city’s agriculture. In contrast, the villagers have a totally different understanding of nature, an understanding rooted in Shinto-religion’s vitalistic philosophy. By believing in the White Deer Kami, the villagers give the white deer the power to regulate their interactions with the surrounding nature, e.g. which rivers to drink from and how many trees can be cut (Narra-note 1). In other words,this vitalistic philosophy makes the them integral part of the cycle of nature.

The critique Masakazu Kaneko expresses with his narrative is twofold. First of all, Kaneko subtly critiques Yuku’s egoism, an egoism driven by his need to safe his mother, and Yoichi’s egoism to preserve his way of life without compromise. And while Yuku seemingly has no other choice than to hunt the white deer, his interactions with Yoichi (Yusuke Fukuchi) and Nagi (Kanako Higashi) nevertheless cause an internal conflict, a conflict he unsuccessfully hides behind his prejudice about the ‘back-ward’ philosophy of the villagers. Secondly, Kaneko critiques the detached way Nemoto and the local government think about animal control, reducing them to mere vermin or numbers. The critique of the latter resounds sensibly in the shot where Yuku trembles before deciding if he is going to shoot or not. This tremble, his hesitation, is communicative of his confrontation with the impact and the meaning of killing an animal as such. 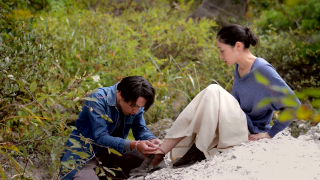 And while these threads of critique are important to the narrative, the true message of the narrative is evoked elsewhere, i.e. in the surprising final scene and in the very final shot of the narrative. While the final scene, by revealing that only Nagi embodied Omoiyari no aru [the thinking about others], underlines the urgent need for more thoughtfulness towards others, the very final shot subtly emphasizes the deeper need for reconciliation beyond the sphere of conflict (Narra-note 2). The narrative underlines, through Yuku’s inner conflict, the unsustainability of both extremes.

The narrative of The Albino’s Trees is framed with a nice blend of fixed and subtle moving shots. And while fixed shots are used to frame a wide array of situations, often focusing on the beauty of nature, the subtle cinematographical movement generally corresponds with or underlines a certain subtle movement of a character in a given space. Another fine aspect of the cinematography is the subtle play with depth of field to change the focus from one character to another or from a character to a sight of nature. But what is most remarkable about The Albino’s Trees is how Kaneko’s thoughtful cinematographical approach turns nature, the narrative space of the mountains and the forest, into a sensible presence of beauty throughout the narrative. By a myriad of captivating shots, either with nature as backdrop or as foreground, the tranquil beauty of nature is ever evoked. And some shots, framing nature as majestic, even instill feelings of awe and wonder (Cine-note 1). 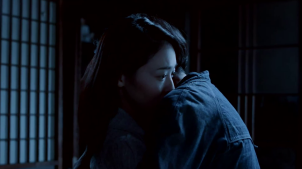 What empowers the presence of nature in the narrative is Kaneko’s outstanding approach to ambient noise. By attentively capturing the sounds of nature a canvas of ‘silence’ evoking the tranquility of nature is created that resounds crystal-clear throughout the narrative (Sound-note 1). In contrast with this lasting presence of nature, the sounds produced by the human characters and “modern society” only echo as temporary presences (Sound-note 2). And when the silent presence of nature is joined by human noise, like when Yuku and Imamori are hunting in the beginning of the narrative, these temporary noises feel like disturbing the ‘balance’ a forest has attained – a contrast sensibly implying the ever problematic relationship between man and nature (Narra-note 3).

Cine-note 1: In some cases, instead of focusing on the beauty of nature, fixed shots also underline the impact of humans on nature itself, e.g. the shot of the dead dear.

Narra-note 1: The philosophy of the villagers is furthermore revealed through Yoichi’s way of thinking about the imperfection of wood, the footwear he wears when he goes into the forest for the daily offer to the White deer Kami, and the ritual of returning the leafs of the cut trees to nature by sending them down the river.

Narra-note 3: It should be said that like in other places in the world the act of hunting in Japan is installed to maintain the balance of nature. This nevertheless implies that the balance was already disturbed – of course by human activity.

Cine-note 1: It is by using long shots, reducing Yuku to a small spectator in the vast landscape of central Japan, combined with subtle awe-inspiring music, that the cinematography is able to instill awe and wonder.

Sound-note 1: The subtle sounds of wind, birds, rustling of leaves, crickets at night, … etc. create the canvas of sensible silence that enforce the tranquility of nature.

Sound-note 2: The careful attention to sound is most sensible in the subtle sounds the characters cause in the narrative space. The sound their footsteps make, the sound they cause when they seat themselves, the sound of putting cups of tea on the table, … etc.