While Shuichi Okita’s cinematographical oeuvre is not large in any way, his narratives, often about quirky and somewhat eccentric men [e.g. The Chef of the South Polar (2009) and The Woodsman and the Rain (2012)], have time and time again proved to charm audiences – and to earn some awards along the way.

His fourth feature film, A Story Of Yonosuke (2003), which was based on a novel written by Shūichi Yoshida, was no different – it focused on a quirky guy and, by winning the award for best picture award at The Blue ribbon Awards and the award for best director at the Japan Film Professional Awards for instance, became an award-winning narrative as well. Reason enough for us to review this award-winning narrative.

[The DVD or Blu-ray is available from Third Window Films].

Tokyo, 1987. Yonosuke Yokomichi (Kogo Kenga), born and raised in a small town in Nagasaki prefecture, moves to Tokyo to attend Hosei university. At the entranceceremony, Yokomichi meets Ippei Kuramochi (Sosuke Ikematsu), a student who happens to follows the same course. At a later date, Yokomichi is approached by Akutsu Yui (Aki Asakura) in class. The three of them enter the Samba circle.

When Yokomichi wants to repay a certain person, he mistakes him for the stylish Kato (Go Ayano). While Kato tries to evade further contact with him, they nevertheless become friends, due to Yokomichi’s enthusiasm. By then, he is already enamored by the sexy Chiharu (Ayumi Ito), an unreachable women who seems to be a high-class hooker. On a double date, Yokomichi meets Shoko (Yuriko Yoshitaka), a rich girl who immediately takes an interest in him. 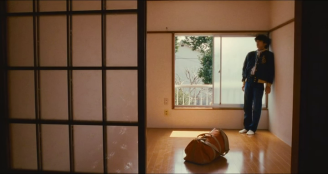 The narrative of A story of Yonosuke concerns nothing other than the impact of a trajectory of life and the effect of being a speaking being a such. And while aspects of life, love, friendship, and ultimately death are – logically – present, these aspects are only sensibly touched upon through the narrative’s focus on the importance of the subjective encounter as such. By offering an exquisite exploration of how a subject – Yonosuke – moves in a particular social field – how this movement, as presence, reciprocally influences relationships, and how this movement is affected by and subjectively affects those subjects, male as female, around him – the narrative is able to express that it is only by meaningfully encountering other subjects that one’s life takes shape and one’s trajectory is influenced.

The narrative’s focus on the importance of the subjective encounter is furthermore evident from the structure of the narrative as such. While the narrative is generally told chronologically – languidly showing the spectators the small delights of living – the few flash-forwards have no other aim than to highlight the (unintentional) subjective effects Yonosuke as speaking-being has had on the various subjects he met in (a part of ) his trajectory of life. 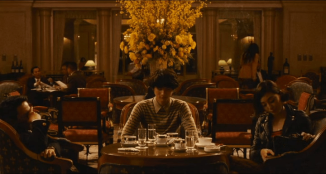 A Story of Yonosuke is also a subtle illustration of the fact that the social space is carried by language and by the speaking beings that inhabit this space as such. It is thus first and foremost by being, but preeminently through speech and comportment – comportment as an act of language – that a subject influences other subjects. In other words, from the moment a subject has a symbolic existence, an existence that produces imaginary roles like student for example, he will undeniably sort subjective effects in the social space.

In Yonosuke’s case, his symbolic existence, his presence in the social space, is marked by a slight social clumsiness, often due to the complexity of the unwritten rules influencing the social space, and a impediment to interpret indirect social signals from other subjects – especially when these signals come from female subjects. It is this charming quirkiness – a quirkiness that regularly forces him to modulate the unwritten social rules, that ultimately affects the subjects around him. 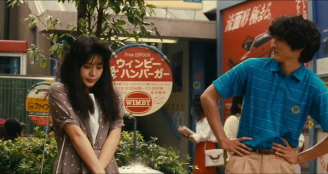 The cinematography of A story of Yonosuke consists of a pleasing blend of fixed shots and subtle moving shots – shots that are often temporally long. The opening concatenation of fixed shots grounds the setting effectively and, by leisurely framing the social interactions typical of this era and emphasizing the ambient noises of the city, the spectator is immediately brought into contact with the atmosphere of this particular narrative space (Cine-note 1). And while this atmospheric painting shapes the atmosphere of 1980’s Tokyo and Hosei’s campus life, it also quickly singles out Yonosuke as the subjective presence the narrative is concerned with. Nevertheless, it is only by contrasting the ‘noises’ (e.g. speech and comportment) of the subject with the environmental ambient ‘silence’ – a contrast that at the same time gives (spatial) depth to the narrative space as such – that Yonosuke’s subjective presence is made truly sensible (Cine-note 2).

As the subjective presence of Yonosuke is so vital and central to the narrative, much of the narrative’s effectiveness rests on the shoulders of the actor portraying him. In this respect, Kengo Kora doesn’t disappoint. Even better, his performance transforms A story of Yonosuke into a masterpiece. His charisma as the social clumsy Yonosuke empowers the entire narrative, turning a seemingly ordinary narrative – a chain of naturalistic conversations and interactions – into a palette of delightful heartwarming moments. 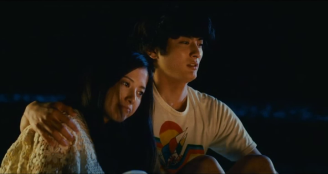 While A story of Yonosuke is lighthearted in nature, it ultimately becomes a moving experience of Mono No Aware. The evocation of the sakura blossoms (near the end of the narrative) causes, in a retroactive movement, feelings of sad gratefulness within the spectator, turning A story of Yonosuke into a magnificent and unforgettable encounter not only with Yonosuke, but also with the importance of the encounter as such and the way by which true encounters affect the subject.

Cine-note 1: The atmosphere of the narrative space is also influences by the subtle way in which the colour palette evokes the colours of a Japanese eighties narrative.

Cine-note 2: The same contrast will, at a later time, make Akutsu’s and Kuromichi’s presence sensible. Nevertheless their presence in the narrative remains subordinate to Yonosuke’s presence.