Kyoko (Ami Tomite) is an famous author and modern artist with a unique style of writing – she first paints the essence of her characters on canvas before writing her novels. Her manager Noriko (Mariko Tsutsui), who is also an admirer of Kyoko, organizes her week schedules.

But Kyoko is mentally unstable – and has difficulty to cope with the uncontrollable excess of pleasure of sexuality. And then, “cut” is expressed by the director. Kyoko and Noriko are on a set, the former being an young and inexperienced actress, while the latter is a famous veteran.

In the beginning of the narrative, there are two spaces in the narrative of anti-porno, two spaces of mental “reality”, one of the room and one of the set linked with the space of the adolescent (narra-note 1). In the first space, we find Kyoko as a famous but troubled author and artist. As much as she says she’s both virgin as whore, she’s neither, as the excess of real in the act of sexuality is not able to find solution in her subjectivity (narra-note 2). In fact, Kyoko fully embodies that sexual traumatic real that she fails – even though she keeps on trying, to make harmless. The symbolically structured master-slave relationship between Kyoko and Noriko, as reduced to the dog, has to read in the same way, as nothing than an explicit ongoing attempt to control the controllable real of the enjoyment of sexuality. That the failure to master the sexual real results in a pure aggressive excess towards Noriko, should not come as a surprise. Instead of directing her aggression towards herself, as various shots in the beginning of the narrative imply, her aggression, as a controllable enjoyment as cut off from the sexual meeting of two bodies, becomes centered on Noriko and sometimes involve others (narra-note 3). 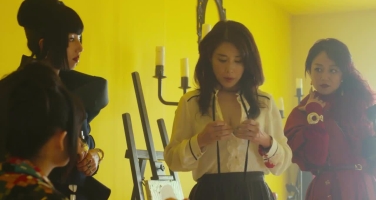 In the second space, the roles are reversed: Kyoko, a young experienced actress, being the slave, while Noriko, a veteran actress, is the master. The experience of this space, of this reversal of roles, influencing the first space of the room. Nevertheless, in the two mental spaces that Kyoko inhabits, her problematic relation with the excess of sexual pleasure persists. Nevertheless, as the narrative progresses the two narrative spaces are mixed with each other or modulated, creating various other spaces that only remain continuous at the level of speech. In other words, by playing with the consistency of the narrative spaces, the concatenation of slightly altered imagery receive meaning by repetition at the level of speech. This masterly poetic modulation turns antiporno into a feminist statement about the trauma of male sexual enjoyment and a freedom that is almost continuous with male position in society (narra-note 4).

This is Sion Sono’s most accomplished cinematography yet, bringing the powerful lyricism he is known for to an unknown height. As impressive composition after composition gets painted on the silver canvas, is becomes clear that this compositional lyricism originates from the framing of movement – the juxtaposition between the camera movement and the movement of the character is fully utilized, the shot compositions and the concatenations of shots as fluidly sewn together by the music and the masterly application of sounds (cine-note 1). What makes this narrative so visually appealing is the artful way in which colours are applied to bring the narrative spaces to life and to enforce the underlying symbolism of the narrative. Furthermore, the colour empowers the lyricism of the cinematography, bringing more geometrical compositional depth to the framing of the narrative (Cine-note 2).

Cine-note 2: There is nevertheless a cinematographical difference at the level of colour as well as the level of the camera movement between the various narrative spaces

Narra-note 1: The space of Kyoko as adolescent which is continuous with the space of the set further underlines the centrality of sexuality and reveals the origin of her problematic relation with sexual pleasure.

Narra-note 3: In the beginning of the narrative, empty bottles of alcohol are scattered around for instance.

Narra-note 4: The narrative uses the relationship between Kyoko’s mother and her father to make the feminist statement of the narrative explicit.