Shogi (Japanese Chess) might already have been featured in many manga and anime, but, given the popularity of Shogi in Japan and beyond, it might be surprising that it took so long for someone to create a biopic about a famous player (narra-note 1). With Satoshi: a move for tomorrow the wait is finally over. This narrative, based on the nonfiction novel Satoshi no Seishun (2000) by Yoshio Osaki, concerns the short life of Shogi prodigy Satoshi Murayama (06/15/1969 – 08/08/1998), who struggled with nephrotic syndrome from childhood onward and, finally, also with cancer.

The narrative has proven to move the Japanese audiences, winning various awards at movie festivals in Japan. But will Satoshi: A Move For Tomorrow be able to move western audiences as well? Well, let’s take a (second) look (General-note 1).

After being rushed to the hospital by his parents, the young Satoshi is diagnosed with nephrotic syndrome. In the hospital, to make sure he can kill his time, Satoshi’s father gives him a Shogi board and some books about the game. This gift will define his life to come.

From the age of fifteen onward, over a period of ten years, Mori (Lily Franky) carefully teaches Satoshi (Kenichi Matsuyama) Shogi. After losing from the calculated Habu (Masahiro Higashide), Satoshi decides to move Tokyo with only one goal in mind: beat Habu and receive the title of Meijin, one of the seven titles in Shogi. But then disaster strikes Satoshi: he receives the diagnosis of cancer. But despite this diagnosis giving up his life-goal is out of the question. 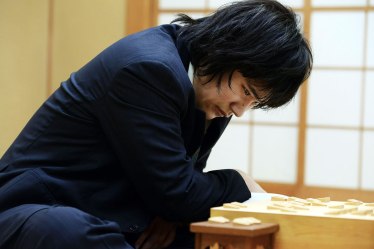 As the name of the narrative implies, Satoshi concerns the life of Satoshi. The narrative, being thus a character study, gives careful attention to his speech, his moments of silence and his comportment. This thoughtful approach, which has to be applauded, gives a believable depth to the subjective presence of Satoshi. The narrative furthermore touchingly uncovers the very necessity of Shogi in Satoshi’s life. This necessity is sensible when the spectator realizes that Satoshi’s identity has become almost synonymous with the art of Shogi – and thus with his wish to beat Habu and to become Meijin. The spectator slowly comes to understand that for Satoshi Shogi is living as such – as it gives him a position in the social field – and that the lack of Shogi is nothing other than the death of his subjectivity. As his life – which is largely told chronologically – slowly unfolds, we experience his timid joys, the tension associated with Shogi, but, more importantly, the effects that the menacing shadow of death hanging over him causes.

While it is true that prior knowledge of Shogi, its rules and tactics, may enhance the pleasure of watching the narrative, such knowledge is not necessary at all to feel the excitement and the tension inherent to the games of chess and to invest emotionally in Satoshi’s narrative. Those spectators with no prior knowledge might even feel tempted to try their hand at this beautiful game.

Satoshi is shot with a cinematographical dynamism that favours movement, while incorporating static viewpoints to underline the characteristic presence of Satoshi and, to a lesser degree, of Habu as well. While the camera-movement is often associated with the movement of Satoshi in the narrative space, the cinematography also underlines the narrative space as such and the comportment of Habu for instance as correlated with Satoshi.

This dynamism is also present in the cinematographical framing of the ceremonial shogi matches, a framing that, by focusing on the careful but decisive movements – the click, click, click-rhythm – of two players within a space characterized by emptiness and silence, makes the tension of these matches truly captivating.

While the potential of evoking character depth is already present in the screenplay, is it Matsuyama Kenichi’s brilliant performance that realizes this potential to the fullest. It is because of his devotion, e.g. practicing the way how shogi masters place their hexagon-shaped tiles for instance, that the narrative, which shies away from inspirational melodrama, can engross the viewer and evoke such touching sadness. 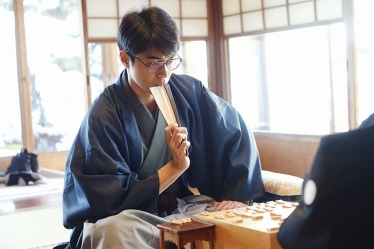 Satoshi: a move for tomorrow is a narrative that succeeds in capturing the art of Shogi in all its diverse aspects. The spectator feels the tension, sees the focus of the players, and experiences the passion associated with the placement of every tile. The strength of the narrative lies in the very investigation of Satoshi as subject as such, while carefully avoiding the pitfalls of easy melodrama or inspirational chitter-chatter. And if we add Matsuyama Kenichi’s splendid performance to the mix, the already engaging narrative is turned into to be a very moving character study of Satoshi Murayama, but, above all, into a beautiful love-letter to the art of Shogi.

General-note 1: This review is a re-review of Satoshi: A Move for Tomorrow. This review was adjusted to conform to the impressions of our second viewing of this cinematographical narrative.

Narra-note 1: Shogi is a Japanese variant of chess that has been played in its present form since the 16th Century and has evolved at its highest levels into a professional sport, with seven annual tournaments that determine not only titles, but also prestige and income in the wider world.

Cine-note 1: Even though the main purpose of the static shots is to make the characteristic presence of Satoshi come to full fruition on the silver screen, these shots are also applied for mere diversity. Furthermore, the contrast that an alternation of static shots introduces between Satoshi and others, often serves to delineate the singular position that Satoshi occupies.

Cine-note 2: The silence that characterizes the narrative space of the shogi game is often underlined by minimalistic music. This music does not fail to add another layer of tension to the already tense proceedings of the game. The more dramatic music, used in various instance, enforces the rivalry Satoshi’s wish creates, while the strings, as used near the end of the narrative, gives the game of shogi its emotionality.