“As long as one doesn’t expect to find any deep psychological truths on the nature of the serial killer in the narrative or a deep character study of a murderer as such, [the narrative] proves to be as thrilling and satisfying as the original was.”

When Jung Byung-gil released his first mainstream feature confession of murder, he probably never expected his movie to become so popular and that it would become an award-winning movie – it won the thriller competition of the Brussels International Fantastic Film Festival for instance.

It was so successful that Robot Communications decided to make a Japanese remake, with Yu Irie as director. Yu Irie, known for 8000 miles (2009), Hibi Rock (2014), is no stranger to the suspense genre, as he directed the popular suspense film “Joker Game” (2015), which won the Fan Grand Prize of the Nikkan Sports Film Award. While the plot is virtually unchanged, can Yu Irie make this narrative as exciting as the original was?

In 2010, after fifteen years of unsuccessful investigating, the case of Tokyo’s serial strangler gets closed. In the very same year, the Japanese government revises the statute of limitations, eliminating the statute of limitations for capital offences (narra-note 1). Seventeen years later and twenty two years after the killings happened, Masato Sonezaki (Tatsuya Fujiwara), the Tokyo strangler organizes an elaborate press conference. He announces to reveal the truth of the murders once and for all in his confessional book, “I am the murderer”. As the strangler’s last crime happened just before the changes in the criminal law took effect, he appears to have evaded punishment for his crimes. 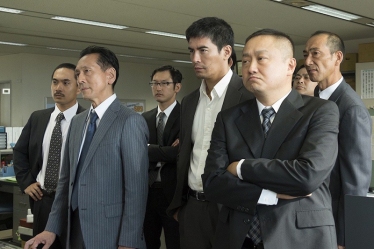 When Sonezaki first appears on the stage, it is already apparent, that despite his vocalized reason to find retribution with his publication, the prime reason of his coming-out is enjoyment and to reap the glory for the murders he can’t be tried for. The conference, a true show for his ego, ridicules the police and media and glorifies his deeds. The importance of his ego is furthermore underlined by the “I” in the title of the book,  the “I” as being the one who takes up the image of murderer.

A collective interest that, for the victims, constitutes a repeating confrontation with the impact of the trauma, but also enables them, as Sonezaki drapes himself with the image of the murderer, to orient their anger, an anger that could not be oriented for twenty-two years (Psycho-note 1).

The perverse pleasure that the media and the public derives from Sonezaki, as the one who went beyond the law, is very sensibly brought to the fore in the narrative and becomes even slightly disturbing for the spectator. But eventually the spectator’s position begins to overlap somewhat with the enjoying position of the public; the spectator being driven by the same enjoyable wish to know. As Memoirs of a murderer progresses, the spectator captured by his wish to know, some surprising and some less surprising twists are introduced. And even if some twists are somewhat predictable, the narrative does succeed in keeping the spectator on the edge of their seat.

Even though fixed camera viewpoints are often used – especially near the end, the grim and bleak narrative world tends to be framed with slow moving shots, giving the narrative space of the shot, as it eliminates unnecessary cuts, often a certain consistency (cine-note 1, cine-note 2).

The placing of the cuts frequently aim to give the narrative space its continuous character – or, in the case of flashbacks, consistency at the level of the character (cine-note 3). This fluidity in the cinematography is also present in the framing of the action. When action is framed more distant, the camera often gently floats, following the action, through the narrative space. The more closely framed action has a more rougher fluidity, often underlining the roughness of the performed actions or the chaos of the situation. Furthermore, in framing action, the narrative doesn’t shy away from showing violence in an explicit manner.

Even though the different format by which the flashbacks, the television broadcasts, the CCTV, and the in-narrative camera, are framed might make it easier for the spectator to distinguish between the different timelines or different viewpoints, this format does not seem to bring any added value to the narrative. 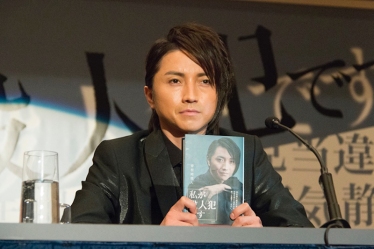 Besides the fluidity of the cinematography, it is also the acting in memoirs of a murderer that makes the narrative so enjoyable and exciting. Tatsuya Fujiwara’s performance as Sonezaki, the center of the narrative, is great and the triumphant narcissism he embodies causes enough discomfort for the spectator. Furthermore, his performance is seconded by the performances of Hideaki Ito and the other members of the cast; each actor bringing enough soul and body to their respective characters.

Memoirs of a murderer does everything a thriller has to do. While the way the narrative is structured provides the necessary tension, catching the viewers’ wish to know, the personal drama, that is mixed into the narrative, is successful in enabling to arouse sympathy for the main characters. In short, as long as one doesn’t expect to find any deep psychological truths on the nature of the serial killer in the narrative or a deep character study of a murderer as such, Memoirs of a murderer proves to be as thrilling and satisfying as the original was.

Narra-note 1: Stature of limitations is the maximum time after an event within which legal proceedings may be initiated. When the period of time specified in a statute of limitations passes, a claim might no longer be filed (source: wikipedia)

Cine-note 1: The opening sequence condenses a whole of 15 years into 3 minutes of narrative. In this sequence overlaying shots, time lapses, and other techniques are used to evoke the passing of time and the introduce the important narrative elements.

Cine-note 3: The flashbacks are also framed in a slightly different colour scheme, making this narrative thread even bleaker.

Psycho-note 1: The collective anger that the strangler creates, can psychoanalytically be understood as an instance of enjoyment, jouissance.